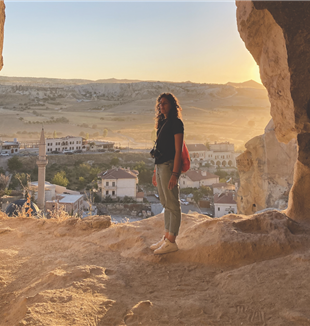 Translated from the October issue of 'Tracce'.

I have been living in Istanbul for two years, where I moved for work. I am 33 years old and am a UN official. Throughout the whole of Turkey, there are only two of us of CL: me and Paul, who lives on the coast to the south, a few hundred kilometers from me. But I can say that my life has not lacked companionship; in these two years, I have never been "alone." Here in Turkey, I have rediscovered and deepened my fondness for the charism, the movement, that is, for faith and why it is essential to my life.

I met the movement seven years ago. I did not come from a Catholic family, I lived quite far from the Church, although I had received Baptism. A few months after my encounter with CL and the beginning of a new fullness of life, I left for Kenya, again for work. It was an opportunity to ask myself what had really happened in my life. During that time I matured the decision to ask for First Communion and Confirmation. It was a year in which I discovered that I am fine the way I am, that my desire can meet a reality that responds to it. I then returned to Italy, where I stayed until October 2020, which is when I left for Istanbul. I hope to stay here because of the beauty of life that I have seen happening in me and around me. First, the evidence that I am never abandoned, that nothing about me and my humanity is forgotten or left to chance.

I moved during the pandemic, so even getting to know people was not easy. For months, I asked God for the companionship of the movement here. It was a wrestling dialogue with reality, and in the many moments of loneliness I was often assailed by the doubt that I had made a wrong choice and taken too great a risk. In short, that I was playing with fire. With the suspicion, deep down, that I was losing the best of life. A year ago, some unexpected things began to happen: I learned that Paul had been living here for 30 years; friends on a pilgrimage from Europe to Jerusalem passed through Turkey. While I clung onto the idea that it was not worth "moving," I found people in front of my house who were on a six-month pilgrimage on foot! Then came Ainhoa, a girl from the movement in Madrid who had moved here for a few months.

Thus, because of the evidence of a companionship that was already there, at the beginning of Advent I proposed to them to go to Antalya, in the south of the country, to follow the Advent retreat from Italy online. In a place of apparent desert, having faces to look at was a great gift,, the evidence of a timely response, but that indicates an ever-present Companionship. We thus initiated a small School of Community among us. And, in this time and work, I discovered better who I am, giving myself the reasons why I had moved in a certain way.

When we received the notice of Fr. Giussani's anniversary Mass, I realized that for the first time no one would organize it for me. At first I reacted with indifference, "Whatever, it does not change the essence, even if it is not happening...." But then the recognition of gratitude for my story and for all that was happening moved me: I wanted to ask for it. We talked to the Bishop of Istanbul who celebrated mass for Giussani with enormous gratitude. He gave a wonderful homily and restored to me the clarity of the importance of what each person lives in the Church and for the Church. In December, circumstances at work became complicated and, faced with the risk of being out of work, I began to look for alternatives. I received two very interesting offers, both outside Turkey. But in the face of them, I realized that I had a vivid desire to stay where I am. It happened that, during one of those days where I was evaluating offers, we had School of Community and I was struck by listening to Paul. He is 76 years old and his nearest church is two hundred kilometers from home. But that evening, for the first time, he talked about loneliness, about the effort of following Mass on TV, about a weight. I was struck by the evidence of the reawakening of his desire. So I asked him what had happened, and, referring to me and Ainhoa, said, "You have arrived." At that moment I realized that I had a task here, not as a duty, but as a desire to respond to the reality that calls me. I realized that if I am here or not is not the same thing. So my question became, "What really matters to me?" While I was waiting for a sudden sign to help me "choose" a job, reality responded with the reawakening of a desire: my own.

In all things, even the seemingly small ones, I can either allow my complaining to prevail, or I can look at the miracle of the faces that are given to me, even simply for a Sunday lunch after Mass. I find that the sometimes "uncomfortable" situations help me to have a greater openness to what is there. The Bishop has already renewed his esteem for our charism on two occasions. I wondered what he wants to say and what he asks of me. There is a starting point: the people I have met so far here. So my task is to deepen my relationship and communion with them, with those who have already been placed in front of me.

One fact was most evident of all: Christianity is more interesting for me today than it was seven years ago when I met it; and it is even more radically fascinating today than it was two years ago when I left for Turkey. I say this aware of everything, including all the people who said to me, "You will be alone, what are you doing?" and my own fear of this, of losing myself, of losing my faith. Instead, I see my consciousness growing more and more. #100Testimonies