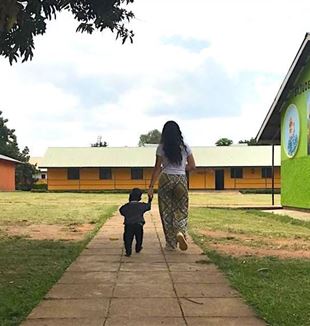 This summer, in July, I went to Uganda to work with AVSI thanks to a call for applications that allows students over 16 to spend a few weeks collaborating on their projects. I left with the desire to meet the faces of those women who had moved me in Rose’s exhibition at the 2021 Rimini Meeting. I needed to be helped, to be looked at; and it is extraordinary how I not only encountered what I was explicitly looking for (if you can call it that), but also a correspondence to that desire to be loved that had grown so much in recent months.

I spent two weeks of the project with other young people of my age in an orphanage in Gulu, in the north of the country. It is a place that takes in orphaned or abandoned children. The latter are almost all disabled. Then there are ten women, "the mothers," who literally act as mothers to the children: each of them takes care of a group, creating a family environment. We were there to play with the children and help these women. Among them, auntie Grace in particular was the person who helped me the most to shift away from that “definition of myself” that I had at the start and that was oppressing me. I still remember her smile full of gratitude for that little help I gave her. With her, among others, was Daniel, an almost two-year-old boy who they had taken in three weeks earlier, whom his mother had abandoned in a market. 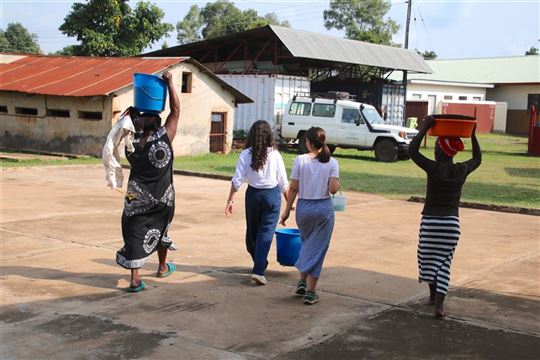 Daniel literally clung to me during those days, crying if I did not hug him or play with him, holding on to my skirt, calling me mama (which, after learning about his story, brought tears to my eyes). Grace was there every morning waiting for me with him, not jealous, not protective of him, in fact grateful that I was there. One day she gave me a name in Acholi, the language of her tribe, as is the custom there depending on the impression made when meeting a new person: mine is Abèr. When they told me what it meant, I thought they were saying it just for the sake of saying it, a nice thing that could be said to anyone: "beautiful and that makes things beautiful." They have such a name to me, who was fighting with myself about feeling like a nobody and not worthy of receiving love?

The next day she asked me if I liked that name. "Yes, it is very nice, but I do not understand why me of all people," I told her. She looked at me and said, "Because that is how I see you. You came here and wanted to meet me, you help me. And I see how you love Daniel. You are there to make things beautiful." That is when my heart skipped: a Ugandan woman, a mother of eight children that were not her own, whom I had known for little more than a week ... told me bluntly that I exist to make things beautiful, that I have a value. She said that to me, who is small and continually judges my own mistakes, my flaws, my appearance. Through another person’s eyes, I saw a “me” that I did not want to believe existed, indeed I was convinced that it did not, and this was destroying me. My heart broke. From then on, after this slap in the face, I began to look within for that glimpse of myself. I want to recognize myself as not only needy, but also deserving of that gaze of love that Grace had upon me. While I was there, I kept a diary and that day I wrote: "I must not forget this gaze!" Talking about it with Seve, principal of the Luigi Giussani High School in Kampala, he told me that I would return home with the certainty of being loved, that it would not be an impression or an appearance, but a certainty: "The heart of man is made to be loved, the heart of man moves and is moved."

Even now it happens that I forget, that I still fall back into my paranoia. But there are those encounters, those gazes, those tears that remind me, call me back. Conversations, phrases, gestures that put before you the fact that you are small but deserve to be loved. "You are a value"; "You make things beautiful,"; "I will never forget your face.” It is an experience that does go away, that does not become a nostalgic past, but a stepping stone, a beginning, a piece of a story. Before I left, my aunt had written me a note with a passage from Julián Carrón that I now feel is even more true: "Now we at least begin to glimpse that everything that life brings out in us – the sense of emptiness, the sadness – speaks of how great our heart is, how we are made for a fullness that is beyond imagination. [...] only those who are willing to participate in the adventure of living will be able to discover, according to a design they do not know, people in whom they will see what they desire kindling.”