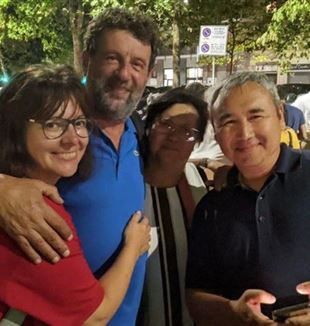 Translated from the original Italian published on vaticannews

Aset is a 41-year-old butcher from Almaty, who comes from a Muslim family. At the age of 15, he established a "beautiful friendship" with some missionary fathers linked to the movement of Communion and Liberation. They became what he calls "his fathers." He began to learn Italian with them, and to slowly discover Jesus, the One he had been searching for all his life.

Fascination with Christ and the Church
Before befriending these religious men – he quotes Fr. Edoardo Canetta, sent to Kazakhstan by the Diocese of Milan – Aset went to the mosque, studied Arabic, and had even approached Buddhism. But he realized that that was not his path. Meanwhile, a fascination for Christ and for the Church that "is life" began to grow. At the age of 21, he decided to be baptized. "It was very important for me to share this decision with my mother." When he told her, she replied, "I would never do it, dear son, but you do what is best for you."

A mixed marriage and a happy life
"Within all the chaos and drama of life," he stresses, "we have the certainty of faith. I had my moments of weariness, of turning away, but in the end I would come back to this place, which fascinated me. I always came back here, where I would find those who love." Aset married Mayra, a non-practicing Muslim from Uzbekistan. The marriage was celebrated freely – he points out – and he speaks of their children, aged 5 and 3, who have both been baptized. "Occasionally they come with me to Mass. The determining fact is that if I am not happy with my faith, then that falls on them as well, and that also applies in general." Regarding his marriage, he insists that their difference in religious affiliation does not scare him. "We look towards the same goal. I call it Christ and she calls it in her own way, but that is okay. The nice thing is that she shared my same anticipation for the Pope’s visit. We are going to Mass together on September 14, and that is not something to be taken for granted. She could have told me to go with friends, instead we are going together."

Together at Mass with the Pope
“We do not argue in our family, we live quietly," Aset continues, "because we respect each other. I was brought up that way: it is better to show Christ in the everyday, beyond words. This gives joy. If one's heart is touched by the humanity that emerges in everyday life, in death and joy, then one falls in love with Jesus. It is an ongoing challenge for me: to show life." Aset is personally grateful to the Pope. The Pope’s style of humility and love, he says, "with which he lives what is happening in the world is a beautiful challenge for him.

Read also - Kazakhstan: "Look, the Master is here and He is calling you"

Living Christianity in daily life
He then recounts an episode that for him is emblematic of what the contagion of faith means. "Our friends in Karaganda take care of disabled children who come from families of all backgrounds. This year, mothers came for the first time with their children on the vacation we organize every year with the fraternity with 130 people. When they were told that the Pope was coming they immediately signed up for the pilgrimage to take part in the Mass. They do not really know who they are going to meet, they think it is a father. ‘Whose father?' they ask. Yet, the beautiful thing is that they have been fascinated by what we transmit. This is basically what Christianity is. I am happy because this is the most important thing of all."