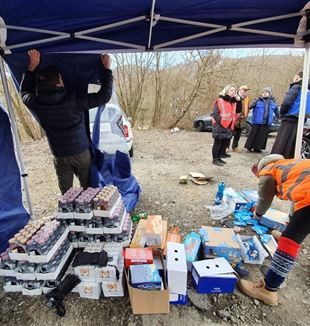 The war is absorbing a large part of people’s conversations and a forest of comments, analyses and observations dominate. The ease with which everyone makes historical and political judgments is reminiscent of the first weeks of the outbreak of the pandemic, when we desperately sought the opinions of doctors and scientists. Now the war has taken the place of the disease, but many things have not changed: we still try to grasp a single thread from the knotted bundle of judgements of experts. Conjectures and analyses that try to find culprits and offer rational explanations for every historical events fail to free our minds from one last bitter thought: what is the point of it all? On the morning of February 24, before habit took over, this question burned for a few moments, causing a strange form of paralysis: what value do our small daily actions have, when everything could be swept away in an instant? The only power seems to be that which controls armies and capital. Thus our powerlessness seems to condemn us to an ultimate insignificance.

Amid this situation, a girl studying at my university suggested that I participate in an initiative to help those fleeing from the city of Kharkiv get to Italy. They were people linked to the Emmaus community, an NGO that helps young orphans or disabled people find their own path. I don't know any of the other members of the group, and I had already made plans for the day, but right away it seemed like an opportunity not to be missed to put my question into play in a very specific circumstance: how what is happening in the history of the world related to my particular story? Thus, after a few phone calls to better understand what this is all about, I decided to leave without really knowing what I was going to encounter. The trip turned out to be longer than expected, and after two days of driving between Slovenia, Hungary and Slovakia, we found ourselves on the Ukrainian border. The first collection point is about five kilometers from the border: the military prevented us from passing by car. We concluded our journey on foot, reaching the end of a long line that, after 48 hours of slow progress, allowed us to leave the country.

From our position we could only catch a glimpse of the endless line of waiting cars. Some people left by car, others on foot. It was like a never-ending haemorrhage, an unusual via Crucis. The evaluations and analyses generated in recent days have been able to anesthetize, at least in part, a pain that re-exploded in front of those tired faces. They were faces of children who crossed the border with exhausted faces and a backpack on their shoulders, some clutching a stuffed animal or a doll to their chest. They were faces of mothers who had to abandon their homes and their husbands, mothers who do not know what will become of them and their children.

Just after crossing the border, some volunteers set up a stall to offer initial support to those arriving. Among them were Stefania and Jan, two young Slovaks. They have been married for three years, she is a believer, he is not. They asked for leave from work and every day they drive several hours to come and offer their help. They come voluntarily and are already hosting three Ukrainian families in their home. That day they are waiting for yet another person, who they had never seen before, who they also welcomed into their home. They begin working in the early hours in the morning. He helps with the luggage of those arriving, she offers food and takes care of everyone as best she can. There is also an elderly lady who, in a military manner, tries to sort people into the buses. She wears a Caritas bib and her lipstick and gold earrings make it seem as though she is ready for an important meeting. They explained to us that a refugee camp has not been set up. For now, those without a destination are welcomed by the population.

Amidst the grey, fatigued and melancholy faces of those who arrive, the sullen faces of the soldiers (who don't resist and start helping them too), Stefania and Jan are a light. Their faces shine with the light of people who find joy in putting themselves at the service of others, whoever they may be. It is the spectacle of a tenacious and silent story of good that continues to act in the folds of great history.

They are the real news, the only barrier to the destructive logic of power. Their actions, so apparently simple, are full of a deep perception of the value of the human being. When peoples become masses and numbers, when people become mere obstacles or instruments for the pursuit of "superior" goals, violence invades: state violence, or the daily violence that each of us suffers or inflicts.

These unknown volunteers represent a political manifesto before which we can take our own stance. Their gestures seek maximum success not in overpowering, but in an encounter; they do not seek a common good for their own interests or that depends on the conflict being resolved, but rather that recalls the organic nature of society that lives as a body, in which the gain of each people increases the gain of the whole.

Read also - Poland: "Our lives belong to each other"

After a few hours of waiting, we found our friends and were able to return home. I am now less anxious to seeks answers in newspapers or daily bulletins. It will not be the most shrewd analysis or evaluation to eradicate the war, or even offer a horizon of meaning during this serious moment for the history of the world, but the multiplication of people who document the positivity of every existence with their lives. This is a game in which everyone is a protagonist.

Thank you Stefania, thank you Jan, thank you to all the army of good that is silently doing its best so that the world does not lose its human face. Your names will not be written in history books, but those of the great powers of the world will, but the real power is communicated through your magnanimity. Thank you: you are the reason, and therefore the strength, of our hope.

*Philosophy student at the State University of Milan. President of the Coordination Lists for the Right to Study - CLDS