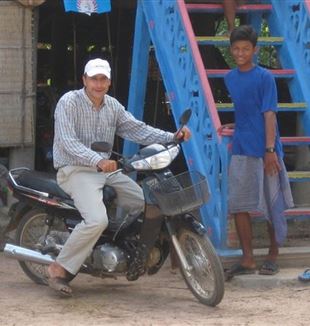 Rice fields as far as the eye can see, dirt roads, villages of houses on stilts, and farmers waiting for the great Mekong River to flood their fields. Fr. Alberto Caccaro passed all these things on his motorcycle day after day at the beginning of his adventure in Cambodia. Every morning he set out for unknown destinations from Prey Veng, the small provincial capital where the bishop sent him in 2004, a place where no Catholic priest had lived before. His travels were guided by an old military map from the Vietnam War years, on which he marked everything, the towns, paths, and people. Almost all of them were Buddhist and did not know what a priest was, but they always welcomed him as a blessing. “They brought me into their homes, to their sick, and I helped them as well as I could with medicine and at times by getting them hospitalized,” recounts the PIME missionary. Their simple questions always led him back to the heart of his vocation. “They asked me, ‘Are you married? Do you have children?’ and I answered, ‘I have no wife, for God. I have no children, for God.’” 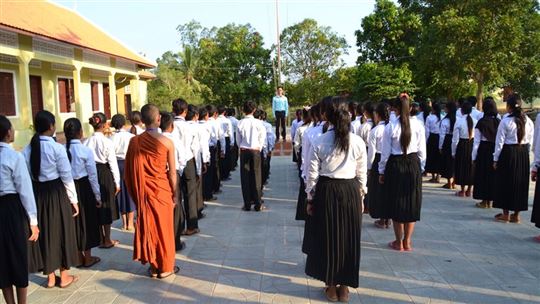 During those daily explorations, Fr. Alberto came to see how difficult it was for children in the villages to continue their studies. The few middle and high schools were concentrated in the big urban centers. The more ambitious students had to travel hours or move to the city. “The dream of building a school began in this way, to meet a need I saw. A very high percentage of students abandoned school, and it was normal for many young people to seek their fortune in nearby Thailand. In addition, we opened a hostel in Prey Veng to host out-of town students, and there I became aware of the many problems of the government schools.” The students returned to the hostel discontented, and even the most gifted ones were unmotivated, notwithstanding the money and effort it cost them to attend. He understood this more from their many absences than from their poor scores. “The only proposal I saw from the school was paid private lessons at the homes of the teachers, a system that gave rise to many ambiguities,” he recounts. He felt the urgent need for a different place, but his superiors held him back. “The apostolic prefect at the time was of Indian origin and feared that the educational projects of Westerners would become schools for the elite; he always expressed many doubts.” But Fr. Alberto did not become discouraged. While everything seemed to be blocked, his dream received new impetus during a visit to the PIME house in Phnom Penh, the capital. “I found a copy of the magazine Traces and I read with surprise a few articles about the educational works of the Movement, which I did not know very well. It was electrifying. I didn’t waste a minute. I called a fellow PIME priest in Italy and asked him to send me The Risk of Education by Fr. Giussani. There I found the flesh and substance of my dream.”

That was in 2005. Since then, he has read it at least six more times, penning the year of each subsequent reading on the title page: 2006, 2009, 2010, 2015, 2017. These were the times he felt the need to “look again at the dream,” and nourish it. “In the beginning, Giussani’s words burned away the solitude I felt and encouraged me to set out on the road I felt called to travel. The idea that education introduces students to the totality of reality helped me give form to the school I imagined, and suggested the criteria for thinking about the curriculum and the selection of personnel. In sum, in Giussani I found my travel companion.” Nor was he the only one. That same year, Fr. Alberto managed to acquire a piece of property just outside Prey Veng, using the savings he had set aside since his ordination in 1995 and help from some friends. Unfortunately, numerous bureaucratic and financial obstacles slowed the beginning of construction, until one day a Korean entrepreneur showed up at his door. “A young member of the parish, a clerk in a company in Phnom Penh, brought him to me. He had heard that his boss, a Buddhist, wanted to finance an educational project in a rural context, and he had told him about me.” The priest’s ideas quickly energized the entrepreneur, and that meeting sufficed for him to decide to commit to the effort for the next ten years with $200,000.

Having found someone who would make the foundations of the school strong, Fr. Alberto started looking for someone who could share the idea of a school centered on the education of the human in all its dimensions. Through the students at the hostel, he met a young teacher and entrusted the direction of the school to him. “Reading Giussani, it became increasingly clear to us that we had to give dignity to every subject and every teacher. And even if we could not appeal directly to one concept of truth, given that the vast majority of the students were Buddhist, we understood that the concern to teach ‘the true’ had to happen within the adverbial form; that is, by doing everything ‘truly.’ We had to run a school ‘truly’: a timetable truly, a lesson truly, an exam truly, give a D truly and an A truly, and do janitorial work truly. Only in this way would we be able to lead our students to the ultimate substance of things.”

Since the inauguration of the school in 2008, three other schools have been established in different locations in the province, with the motto “Small is Beautiful” because they always opted to build small schools, no more than 150 students, promoting a capillary presence in the province. “That first experience multiplied itself through the many graduates who, because of the experience they had had, wanted to continue to be involved as teachers,” explains Fr. Alberto. This was the case of Sagn, who excelled in physics and would have wanted to continue studying it at the university, but decided to take the admission exam for the government school for teachers. He passed, and while he was working on his education degree, he also began helping out at the school. “During his lunch break he ran to the school and collected the students’ notebooks so he could correct their exercises, and also was available to answer their questions.” He soon became the tutor for scientific subjects, and was then promoted to a more permanent position. Another former student, Chuan, teaches computer sciences at the school now. Like many teachers, he was able to read Giussani’s The Risk of Education because of Fr. Alberto’s 2010 translation of it into Khmer. “The desire to publish the book in Cambodian was an act of gratitude on my part, as well as an instrument for the formation of the teachers and a gold mine of starting points for entering into dialogue with the families.” Speaking with the parents, he often repeats Fr. Giussani’s words, very understandable even in this place: “Giving a child life would count for nothing if parents failed to tirelessly help their children recognize the total meaning of that life.”

The work of translation was long and at times difficult. Fr. Alberto asked the help of Hong, a student in the Prey Veng hostel whom he had met at the beginning of his mission during one of his exploratory trips in the villages around the city. That day the road was in terrible condition, reduced to mud-filled rutted tracks, and little Hong had stopped his bicycle to let Fr. Alberto pass. The child’s gaze softened Fr. Alberto’s. He turned off the motorcycle and asked the boy where he was going in all that rain. “To school,” he replied, without betraying the weight of those twenty miles a day. Fr. Alberto arranged right away to get him a place in the hostel, little imagining that thirty years later they would be working side by side, looking for the best words for translating Fr. Giussani.

“Cambodian is a very pragmatic language, and some concepts, for example ‘Mystery,’ have no equivalent. Hong and I tried to get as close as possible, digging into the words and our experience. So ‘Mystery,’ for example, became something that is there but that you cannot see, like a set of keys you cannot find,” explains Fr. Alberto. But at times the explanations do not suffice. The line, “He is the substance of our life,” stumped them for a long time. At a certain point, Fr. Alberto, tired of all their attempts, grasped in his fingers the tablecloth covering the table they were working on and said, “Hong, touching this tablecloth I can sense the weave, whether it is cotton or nylon. In the same way, if I touch your hand, I sense what you are made of. You are made of God.” At that point Hong understood.

Today Fr. Alberto’s schools enjoy a certain fame. Years ago, the photographs of some students who had graduated with high honors and received awards from Prime Minister Hun Sen circulated all over internet. Many rebaptized the school as “Jesus’s school.” Fr. Alberto smiles at the idea, and thinks back to how difficult it was at the beginning of the adventure to find students willing to enroll because they feared that doing so would be the prelude to being proselytized. “Instead, I wagered on the ‘fragrance’ of a place, made up of the ‘I’ of the student and the ‘us’ of the school, neither of which could be reduced to the other, but which promote each other in turn and within which education happens.” He had neither formulas nor procedures to hand on to those who took over the management of the various schools. “All we can do is offer places, be they just a sheet of paper or a drop of ink, where it is possible to cultivate the desire for something deeper. Through the various disciplines, we can enable students to sense that there is a ‘secret’ behind all that is visible. This is what school is: a place with doors and windows thrown wide open.”

He understands this clearly when he visits the younger classes. The children who run up to him as if he were their father make him feel the gravity of his responsibility. “They are like many questions, expecting an answer. They are implicitly asking me for the meaning of life, love, friendship, time, and pain, and I don’t want to wound them. I feel I would be lying if I gave them tidy little speeches about values, so I encourage the teachers to answer these questions slowly, over time, with their presence, their well-prepared lessons, and their orderly classrooms.” But then he says, “Only God can answer those questions. Only God is worthy of their freedom. Nobody else. These children deserve God, nothing less.”#100Testimonies