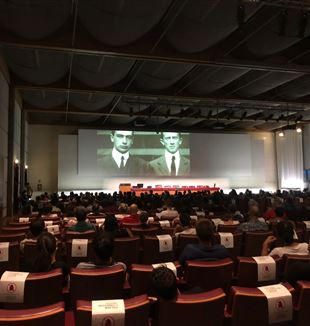 “I believe that, so as not to lose our bearings, we need to make our own the truth contained in good stories […] we need a human story that can speak of ourselves and of the beauty all around us. A narrative that can tell us that we are part of a living and interconnected tapestry. A narrative that can reveal the interweaving of the threads which connect us to one another […] Human beings are storytellers because we are engaged in a process of constant growth, discovering ourselves and becoming enriched in the tapestry of the days of our life.”

These words of Pope Francis, re-called by Andrea Monda during the presentation talk "Tolkien and the polyphony of creation and the creativity of man", embody the experience of the exhibition "The Tree of Tales" at the Rimini Meeting. Proposing a journey through the life, thought and work of J.R.R Tolkien, the exhibition recalls a key image used by Tolkien in his essay On Fairy Stories, in which he expresses his vision of the nature and purpose of artistic creativity: the organic relationship between reality (the Tree) and the individual, imaginative subcreation of each person (the leaf). In Tolkien’s powerful vision, Creation is thus envisioned as a single, great Tree, which is yet made up of countless different leaves, each with their own idiosyncrasies. Our experience of the “Tree of Tales” revealed itself to be just this. Much more than just an exhibition, our Tolkien adventure emerged as a narrative in itself, with our individual threads coming together to form a single tapestry, whilst also maintaining their own glistening colours. This was the fruit of an unexpected journey lasting almost two years, with many of us working together largely unknown to each other and coming from different backgrounds and countries. Yet, method and content were seen to coincide: creating new art by gratifying each person’s particular individuality and story, and helping each other to better understand what we have received, for us to then return home to tell new tales and continue that one Great Story. 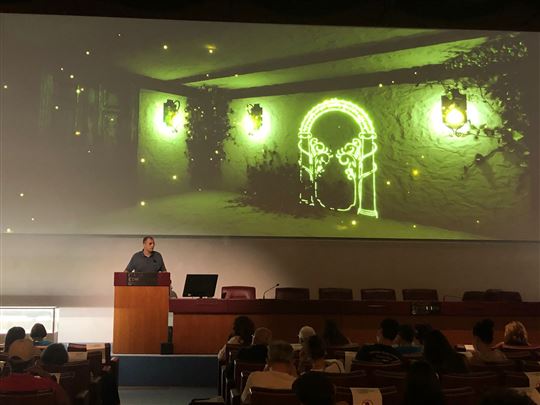 What stands out from Tolkien’s vision of artistic creation, which emerged throughout our months of work, is that even though every creature is destined to express their individuality in a particular creative form, this creativity is not to be kept shyly as a personal possession, but is a free gift to be shared. In fact, when asked what struck him most about working on the exhibition, Paolo says that the word “light-heartedness” comes to mind: "Not in the sense of lightness of commitment or passion, but that, from the very beginning, our intention was to put together contents and solutions that no single person ultimately had possession of. Thus there was that lightness of something that was not imposed by a project, but that was continually open to each individual contribution.” This, he describes, created, “a truly choral work; each of us, in what we are and with our human gifts, felt totally inside and involved, to the point of enriching ourselves and the project itself.” And the outcome? "Betting on the freedom of each person has been far more interesting than the simple creation of an exhibition…”.

Luca explains how, without taking this risk, he would never have returned to the Meeting this year as a volunteer rather than simply as a spectator: “My whole life has been a constant ‘take my word for it’. Meeting Beppe and my ‘yes’ to agree to be part of the exhibition was a grace and generated a total change within me.” He explains how the proposal emerged as completely unexpected during a particularly painful period of his life, where everything had just recently turned completely upside down. When the proposal came, he accepted immediately, but not to “distance myself from my previous story, from that strong pain I was living; it was rather an entrusting myself back into His hands, who was once again saying ‘take my word for it’.” For Paolo too, what was at stake was to give it his all. Despite being the eldest of the group and having worked in communication for forty years, he describes that he was “as excited as ever about this work. I did not always understand where it was going, but from a human point of view this method was interesting to me and I pursued it. I put all my skills and experience into play because I was experiencing the freedom of an adventure that had a very clear purpose, but which had to be lived.”

For Ivano and Antonino, meanwhile, this was their first time at the Meeting, both removed from the CL experience. “I did not know anything about the Meeting, what it was, why it was organised; everything was a discovery,” says Antonino. “Once at the Meeting, I was flooded by a surge of emotions. I saw an event full of enthusiasm, exhibitions, conferences, meetings, all aimed at discovering, or re-discovering, human individuality to share with others.” For Ivano too, preparing the exhibition was a leap in the dark; he came to the Meeting with a number of preconceptions, which he describes through Fitzgerald’s words in The Great Gatsby: “I was within and without, simultaneously enchanted and repelled by the inexhaustible variety of life.” Yet, he reveals, what happened exceeded his expectations: “I was within the event as I had participated in the exhibition meetings. At the same time, however, I was without, watching what was happening in a curious but sometimes irreverent way. But I was also outside of my usual life as a scholar and researcher, having re-discovered that carefree desire to spend time together in a light-hearted and unexpected way.” And this being together generated a unity that both struck us and others, even before the Meeting itself began. 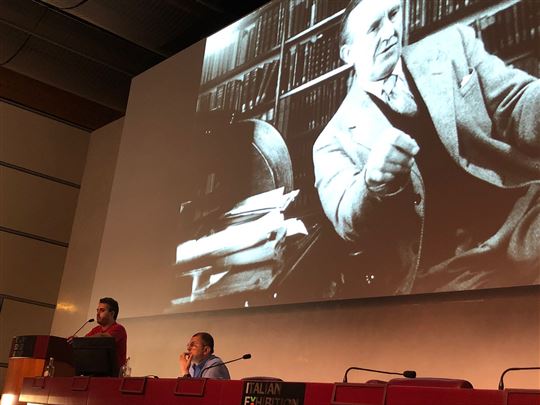 Alessandra, living in London, was not at Rimini, but describes how this unity had already begun to emerge all the way back during the first Covid lockdown: “It was not a matter of deciding who had the best idea, but of looking for the truth together. Ultimately, the end result was always far greater than our individual contributions.” Andrea describes how, after months of being used to seeing these faces on a computer screen, meeting these companions in real life was beautiful and generated an amazement that he wished to indulge: “During the days of the Meeting, the relationship between us grew. Looking at the faces of these people, a gratitude and desire to be there emerged within me, because something was happening. I was struck, for example, by the dinner we shared on the penultimate day: you could feel our enthusiasm at being together because of something that was happening there and then, so much so that people looking at us from behind the glass were amazed.”

However, it was we who were the first to be struck by this ‘something’ that was happening. Antonino explains how “a special chemistry was created between all of us, almost magical. It is a feeling that I have not felt in years (not to say decades). I have received (and I hope I have given) enormous affection from everyone; that feeling of knowing a person for years, even if they were only introduced to you a few hours before.” Luca re-iterates this, describing how “it only took five minutes during the prep meeting with everyone to realize that there was an extreme affinity of understanding. We were a group of people with a single gaze, a gaze of gratuitousness and love that was constantly there during the Meeting.”

Watch now - Tolkien: The polyphony of creation and man's creativity

And now that we are all back at home, like the hobbits at the end of their adventure, what has all this generated? "All this made me reflect," says Antonino, "because most of the members of this team (not to say almost all of them) are at least half my age, and it was wonderful to see their desire to construct something, that fire that burns strongly and vividly, the desire to get involved and confront reality in order to try to improve the future. This gave me hope, made me believe in young people again, and allowed me to understand that good really exists.” For Andrea, the key was to understand that the exhibition “did not just serve to introduce others to Tolkien’s life and work, but to make me more aware of how I live and what allows me to live in a certain way.” In fact, as Ivano describes, in Rimini we did not just experience an exhibition, "but it was Tolkien himself who showed us who we are, what we believe in and who we want to be. Placing us inside and outside of ourselves, his stories have allowed that flame within us to ignite or rekindle, asking us: 'What are you now going to do with that greatness, that possibility that God has given you to become a sub-creator and, therefore, a creator alongside Him?' It was with these questions that I returned home."

The most beautiful thing is that the messages on our WhatsApp group never cease to end; this dialogue and friendship is continuing; becoming, as Andrea describes, "more and more personal, and total." The end of this adventure has not generated nostalgia but, as Ivano expresses, has allowed "the leaves of the tree of tales, perhaps found on the ground along the way" to bring us back home "with a new, enlightened and happy gaze." All this brings me to say, in the words of Sam from The Lord of the Rings: “What a tale we have been in, Mr. Frodo, haven’t we?” What else can this be if not the evidence that not only Tolkien's stories, but also this narrative of ours, continues to nourish life, allowing it to blossom continuously, generating and re-generating, in unpredictable ways. As Tolkien himself writes, “what is really important is always hid from contemporaries, and the seeds of what is to be are quietly germinating in the dark in some forgotten corner […] No man can estimate what is really happening at the present sub specie aeternitaris.”