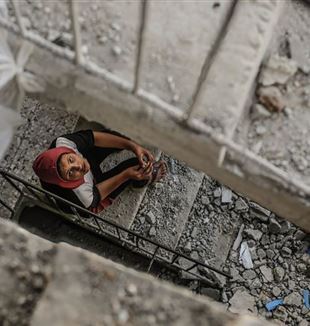 Let us be clear. There is too much violence and too many injustices suffered by both countries. There are too many reasons and errors on both sides, which are unwilling to meet, starting from their political classes. That is why every so often we talk about Jerusalem, Gaza, Tel Aviv…Israel and Palestine. A strip of land that is so small and yet so conflicted, which the recent Abraham Accords wanted to marginalize. And yet here we are, still discussing and trying to untangle such intertwined threads, stained by the blood that once again bathed the land of Jesus.

Because, as we know, it is not possible to conceive of peace in the Middle East without Israeli-Palestinian conflict. What path to follow? What attempt at reconciliation can be made after politics, often soaked in rhetoric, fails? 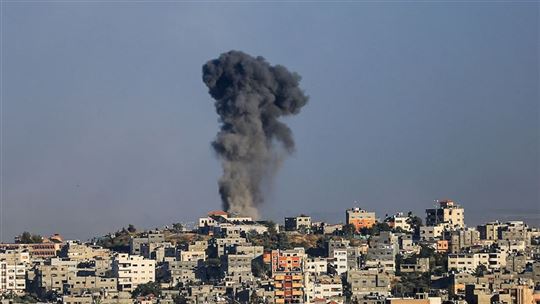 There are stories that history has given us that open up a different perspective. Like that of Abu Omar, for example, who grew up in East Jerusalem, in the area that was the scene of the latest clashes over expropriations against the Arab population. His brother was killed by injuries received after protesting during one of the last military operations. "Justice is taking revenge by returning the evil received." That is what the young people Abu Omar met on the street said to him, in his neighbourhood that had plunged into degradation and that has a lack of water. For his work, he was forced to study the language of the "enemy". "If I had not learned Hebrew, I would not have been able to work. I was torn, but my family could no longer live and I had to help them by bringing some money home." Thus he enrolled on a course to study the new language, spitting on the steps. "I remember expecting to see the military in the classroom, the faces of those who had slaughtered some of my friends. So I kept my head down, full of fear and rage". Then came a surprise. "I sat down at the desk and saw the faces of those around me. They were calm. One of them smiled at me and we started talking". About sports, first of all. And then also about the rest, as usually happens. "They were also tired of war. And they were eager to know who lived on the other side of the wall. They were like me." Over time, Abu Omar discovered the anguishes of his new friends; the stories of those who lost children, husbands, and wives in the attacks. He realized that "his" law of retaliation cannot work. "If we gouge out the eyes of those who blind me in order to make amends, no one will see anymore. That is why I have forgiven those who killed my brother.”

Daniel realized this too, after a long time. As soldier on duty during the second Intifada, he killed and saw people die: Palestinians, Israelis, dear friends and strangers...fallen in the days that followed Sharon's visit to the esplanade of the mosques. "Once I finished my military service, I went to therapy because I could not stand in front of all that pain". Treatment, however, never answered his truest question: "How can I live in peace, forget, forgive those who killed my friends? And on the other hand, I saw my ‘enemy’ was not able to forgive me either.” It was at that time, ready to leave the country and re-build his life elsewhere, he met the fathers and mothers of the Parent's Circle, an association of Israeli and Palestinian parents who donate blood: Israelis to Palestinians and vice versa. "It seemed silly to me, but I can never forget the eyes of that mom who gave me the flyer at the Jaffa Gate in Jerusalem. I went back and asked her, 'Why are you smiling? Can you not see that there is no hope?’" The response he received from that woman would change Daniel’s life forever: "Hope is in everyone's heart. My son died a few years ago, but if I had not had the courage to look deep into my heart, I would never have forgiven. And I probably would not be here today." Something happened that made Daniel never want to be separated from these new friends. In the space of a few months, he started tours for Israelis and Palestinians, all together on a bus for a few days together, to discover that the real enemy is not whoever is sitting on the seat next to you, but your own heart if it is unable to meet them. "They asked me if I was not afraid to cross the Wall. And each time I answered that I was much more afraid not to. Only from the encounter with oneself and with others can forgiveness be born."

With the recent new military operations hitting part of the Gaza Strip, parish priest Fr. Gabriel Romanelli knows how difficult but valuable it is to pick up these seeds of hope. An Argentine priest of the Institute of the Incarnate Word, in a meeting organized by the "Pro Terra Sancta" Association, described the struggle of living day and night under bombs. Some of his parishioners have fled, electricity comes intermittently and communication routes are mostly blocked. The small local Catholic community (113 faithful out of a population of about 2 million) faces yet another ordeal that is the result of the provocations of Hamas and the Israeli far-right. More than words, it is his eyes that speak for him: "We are the little mustard seed in the whole Middle East. Right now, we ask for forgiveness for the victims and also for the perpetrators, because whoever kills an innocent person kills himself." The children he tries to help are often left to their own devices, and all this injustice cries out for vengeance in so many. "Yet forgiveness is not impossible. I know it is in the heart of every man. We seek peace and justice, but we must not forget what Saint John Paul II told us when he came to the Holy Land: 'The justice you seek will never come without forgiveness'". For this is the most effective negotiator. And although it is also the most absent at the negotiating tables, it is timidly alive among courageous and attractive people.”