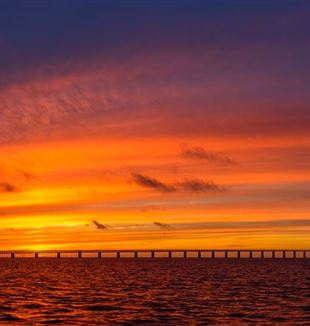 It is just twelve kilometers, but the pandemic is teaching us how even that can be an impassible distance. The high-tech bridge–an eight-kilometer suspension bridge connected to a four-kilometer underwater tunnel–that connects Sweden to Denmark has been closed since October. Valentina Battistoni has lived in Malmö since 2016. She came there from Rome with her husband, who is a professional trumpet player, and two children (a third was born on Scandinavian soil). The closest CL community is in Stockholm, about an eight-hour drive. Or in Copenhagen, on the other side of the bridge... Before the pandemic, she and her family crossed the strait twice a month to attend School of Community. The Italian family brought a bit of warmth to the cold region, regularly inviting Danish friends to their home on the other side of the bridge for a proper Italian pasta dinner and a glass of wine, something unfamiliar in these parts. “With these friends, like those in Italy, no question, wound, or discovery slips through the cracks. The community here is very young and you cannot get by with ready-made phrases,” Valentina says. “Not even now when everything is done by Zoom.”

Here the battle against the virus means no social visits, no Masses and no masks. It seems like a contradiction, but “they have faith in herd immunity. In Malmö, the churches have been closed since October. In Stockholm, they are open, and some priests celebrate up to fifteen Masses in a single day. We sorely miss being able to physically attend.” Still, without a doubt the situation forces you to look at what is essential–what makes you get out of bed in the morning. In Italy, Valentina taught art history. She said her job was like a continual prayer “because the subject was beauty and because the students never give you a break; you always have to be sincere and transparent.” Here, too, she is a lärare, a teacher, but she teaches Italians who, in Sweden, have the right to retain their mother tongue.

Even before the pandemic, she had started going to a small town nearby to tutor two Albanian children who had moved from Italy. One is Marko, restless and fidgety like kids his age anywhere in the world. He gives one-word responses to questions, if any. “One Monday, he didn’t have any homework or tests to study for... his teacher hadn’t done much. And he broke down crying. He said he felt stupid, that he isn’t happy not doing anything, with no one following him. It struck me: he could have been happy doing nothing, but instead, he didn’t want to throw his time away, so he begged for help.” She could have tried to console him, saying that next year he would change schools and teachers...but the day before that her friends in Copenhagen had come to her house for lunch after many meetings over Zoom. “We talked about work, played with our kids, and helped each other to see what it means to say yes to Christ in daily life. When I found myself there with Marko, that was my yes to Him: I ‘virtually’ introduced him to a number of teachers, friends of mine who had recorded lessons on YouTube, then we worked on some math and spoke about confirmation and about our being called to live here in Sweden... I told him that both of us were made for happiness.” She continues to help him because, as she says, “I want to see his eyes and face his questions.” 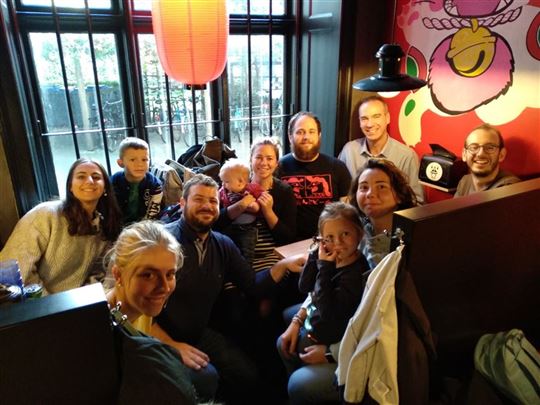 With COVID, there are fewer and fewer foreigners around so, to pick up an extra paycheck, Valentina found a job in a specialty Italian food store. “Finally an ‘ATM’ kind of job, I said to myself. One where you can go on autopilot, come home, put the kids to bed and relax on the couch.” That didn’t last long, though, because her colleagues, as well as her clients–Swedish people– noticed when she was on autopilot and asked, “Is everything okay?” Valentina started to understand how “checking out” was not good for her or for anyone. People come to the store to look for good salami, tomatoes, real pasta, and a bright face. In other words, “they want to see how you can relish life, and not just because they eat well in Italy...” One morning, a woman came in who “struggled to move her arms,” so Valentina helped her shop. A couple of months went by and the woman came back. Valentina was in the back of the store, but came out when she saw her to ask if she could give her a hand. The other woman’s eyes opened wide: “You remember me?” She helped the woman navigate the store, packed bags that were not too heavy for her, and loaded the car for her. Nothing heroic, but something surprising. “Now she comes often. She also shops for other people from her little village outside the city. But if I am not fully there with all my questions and my need to see Jesus alive, I do not recognize what is happening.” This recognition was in evidence when a customer had packages shipped to a small town above the Arctic Circle and then sent a picture to thank her for how carefully the items were packed.

“I am learning that there are no limits to the fact that others are important for me,” even in the frigid homeland of Ikea where, when you try to exchange a word or two at the supermarket, the other person is taken aback. Or where, at getting a fifth "Hej", hello in Swedish, after the thousands of greetings offered to others, the whole Battistoni household celebrated. This is something their children are learning, too. For years, they have made the same journey every day from the house to preschool. Tommaso, who was four when they moved to Sweden and struggles with language, even Italian, always said “Hej” to the hairdresser when they passed her shop without receiving a response. Valentina realized, though, that each time the woman was a little closer to the door. “Slowly, over the course of three months, she reached the point of replying to our greeting, and then one day, she stepped out of her shop, hugged Tommaso, and said, ‘I wait for you every morning.’”