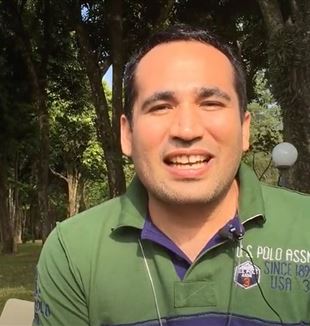 Yan, a 43-year-old Cuban employed in an insurance company, lives in the heart of the Caribbean, in the eastern part of the island of Hispaniola, Dominican Republic. He arrived here fifteen years ago and started a family: "I have three children, one in heaven". He is part of the small CL community in and around Santo Domingo; just under 20 people of various ages who meet every Thursday night for School of Community. "Now we meet online, because the pandemic has not spared even our island," he says. Out of a population of 10 million, Covid has affected 250,000 people, with more than 3,000 deaths. "Thank God it was not like in other countries, but it brought tourism to its knees, hitting our economy hard." The agricultural sectors – 80 percent of whose produce serves the local population – were saved.

"When the company told us in March 2020 that we would be working from home, we thought it would be for a short period." Two, three weeks... "Instead, slowly, over time, closure became the norm." He talks about a new challenge, one that so many have experienced in a similar way, made up of balancing the family and learning to live parts of their time together that had never been shared before. "Work, for example.” It was about learning a new way of living relationships "starting from the gaze of faith. If it used to take whole days to settle an argument, we now find ourselves asking each other for forgiveness after just a few minutes."

This is a dynamic Yan has also seen within the community: "I was surprised that instead of weakening our bond, isolation is making us take School of Community more and more seriously. It is a unique place to walk together. It was so even in the face of the provocation of the need of so many friends, sick or unemployed." Nothing was spared. Not even a request for help that came from Colombia: "A guy I had met by chance a few months earlier, during a two-hour ride in his Uber. But why was he writing to me?" Yet everyone got involved to give him a hand "and an incredible relationship grew with him and between us." It is impossible to sit still, despite everyone having their own, unique problems.

Rogelia, a teacher who lost her job at the beginning of the pandemic, with four children and a husband to lend a hand to contribute to the family's needs, is an example: "Every day was a real provocation, sometimes we did not know what would happen. This made me surrender to the mercy of Christ, as well as doing everything I humanly could." There was fear, worry, "but also more free time to pray the Rosary, and follow Mass on TV. I was looking forward to the day of our School of Community to see the faces of my friends, those who are bringing me closer to Christ at this time." She has now found employment, and her oldest daughter helps her with her work in the afternoons when she finishes her classes, "This period, reality, has been a continuous provocation. Only now I realize how much it has made me grow."

Read also - "A smile in the eyes that is not mine"

"Never alone," says Margarita, another friend of the community, despite the fact that no one has lived with her for a long time, after her daughters went to live abroad. "I have been in the company of CL friends for many years now. I have lived my life in the normality that is possible following a stroke, doing my daily work, participating in School of Community, meeting Jesus at Mass and other occasions. This saved me and still saves my life. Especially during this time, with the opportunity to experience them online."

"These days during School of Community we are tackling the topic of the charism," says Yan. "I realized that the charism is the loving way God calls us. For me, it happened through the movement. I look at my past, when I was an atheist, born in a country where the meaning of life was completely different from what I know today. I was given the enormous joy of being loved and recognizing Him, of being forgiven and recognizing Him." And to see how Jesus, today, also uses him to be recognized by others. In mid-January, Yan had some rather serious health problems for which he had to undergo some tests to rule out the worst: "The day I went to pick up the report, I had the results in my hand and was confidently waiting for the doctor to show them to me, without the anxiety of opening the envelope. Of course I was afraid. But I have faith in the One who makes my life. The doctor informed me of the outcome: ‘Everything is fine.’ But then he added: ‘Are you a Christian? Because I have often communicated the results to other patients, and I recognize that when faced with this moment there are always two attitudes: hope or desolation. You are full of hope'".