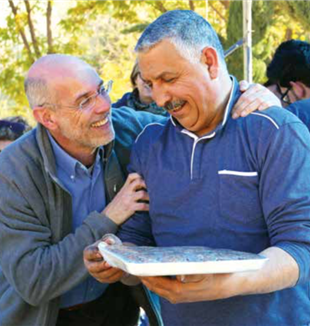 Bethlehem is a difficult city whose contradictions are interweaved in an impossibly tangled knot. On the one hand, it is the location of the Basilica of the Nativity. Its low entrance doors force you to bow as you enter. Downstairs, a silver star on a worn slab of stone marks the place tradition says that Jesus was born; candelabras suspended from the ceiling shed a gentle light, and the space is suffused with the fragrance of incense. One’s thoughts turn to the wonder of Mary, Joseph, and the shepherds. It is one of the sweetest pages of all the Gospels. On the other hand, a few hundred yards away is the concrete slab wall separating the Palestinian territories from East Jerusalem, passage through which is controlled by soldiers at checkpoints. The Christians of Bethlehem want to leave; they are a minority of a minority, and feel pressured by both Israelis and Muslims. The tangle of the city’s paradoxes is well represented in the murals that the world’s most famous street artist, Banksy, has painted throughout the city, especially the one of the dove wearing a bulletproof vest. Even here of all places, in one of the cities dearest to Christianity and most marked by a lack of understanding among peoples and religions, a small group of about ten Palestinian friends, mostly women, has been meeting for School of Community to study Fr. Giussani’s texts for the last few years. Members of different rites and confessions–Catholics, Orthodox, Protestants, Syrians, and Armenians, they call themselves “The Touched.” What they have been touched by is clear when you listen to their story, which began in 2010, on a day like any other, in the Caritas Hospital for Children, where some of them had been working for years.

This pediatric hospital was founded in 1979 by a Swiss priest, Fr. Ernst Schnydrig, with the support of Caritas of Switzerland and Germany. Today it treats thousands of children from the Palestinian territories and is visited by pilgrims who stop by after seeing the Basilica of the Nativity. They come to learn about one of the contributions of Christians to Palestinian society. “We welcome about 250 pilgrims a day,” explains Lina Raheel, who interfaces with the families of their little patients. “It had become a routine for us, but then one day there was a group from Italy that was different from all the others. They seemed interested not so much in seeing what we do in the hospital as in getting to know us as people. They invited us to dinner and we became friends.”

Enrico Tiozzo Bon, president of the Federation of Solidarity Centers, was one of those Italian visitors. He came from Ferrara, together with about 15 people, including two friends, Michelangelo Rubino of Foggia and Stefano Bondi of Forli. They had been invited by Vincenzo Bellomo, a lay missionary from Mazara del Vallo, on behalf of the Custodian of the Holy Land, whom Bon had met several months earlier in the context of the AVSI Tents campaign.

The group belongs to the Confraternity of Saint Catherine of Siena, a group of people engaged in social and charitable works who gather to support and accompany each other as friends in their daily work. Some are in the movement, others are not. But in order to describe it, they use a typical “CL-ese” expression: an operative friendship. Vincenzo, who felt the need for help, wanted Enrico, Michelangelo, and Stefano to meet those engaged in charitable work in Bethlehem. Lina recalls, “In the beginning we were not sure who they were and what they wanted, but there was something about them that attracted us.” Enrico recounts that he had a suitcase full of prosciutto and salami, and after visiting the places they came to see, he issued a general invitation for dinner that evening for whoever wanted to come. George Abdo, a social assistant at the hospital, commented, “What was the first thing about them that struck me? The prosciutto.” But what impressed Lina and her colleagues was that the Italians returned to visit them once, twice, three times. In 2012, Enrico invited them to Italy to visit the places of charitable work they are engaged in, and some accepted. Lina and Wafa Musleh, a woman active in the Hospital of Bethlehem, returned from their tour very impressed. Enrico recalls, “I think they were most struck by the fact that we laypeople guided the work: we were motivated by our ideals, and it did not depend on the presence of a priest.” But something more immediate remained in Lina’s memory: “It was stupendous to see people who seemed to speak the same language, and wherever we went, we were welcomed and embraced as friends, even if we were meeting for the first time.” After that trip, their questions multiplied and the relationships among the Palestinian colleagues changed. Hiba Sady says, “Lina and Wafa always talked about them, and I began to want to meet them. They were different. They thought in a different way. Over time, they became part of my life. If you had a problem, you could talk to them about it.” Lina was born and raised in a house facing the square of the Basilica of the Nativity, and she has seen thousands of pilgrims in her life, but never ones who returned so many times. “How much money do these people have? Is it possible they have no place more beautiful to visit on vacation?” One day the group of Italians went to visit Capernaum, but Lina could not join them. She called Wafa to ask what they were doing and spent the whole afternoon thinking about these friends on their outing. She even forgot to prepare dinner for her husband, who was returning from a business trip. “That was when I understood that something in me was changing. I was attracted by these friends in a way I could no longer ignore.” 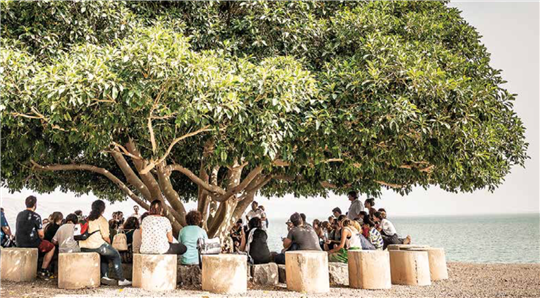 One evening, during one of the group’s many visits to Bethlehem, Lina asked the question directly: “Who are you?” Initially, Enrico was a bit unsure. “We had never said anything about being part of the movement. It was out of a kind of modesty, but at a certain point a friend looked at me and said, ‘You have to tell them.’ So in order to explain the type of experience I’d had with Fr. Giussani, I drew on how Giussani, in Recognizing Christ, recounted John and Andrew’s encounter and the way Andrew must have hugged his wife when he returned home, and how she must have sensed that something new had happened.” Lina said, “That’s what’s happening with us!” and she asked, “So, is what’s happening to us an encounter with Christ?” At home that evening, Lina could not get to sleep. For years, she had no longer believed that faith could truly respond to the great questions of life, like those arising from the suffering of children that she saw every day, but she pulled out her Bible and found the episode of John and Andrew. She read it and reread it. The next day she said, “But I didn’t find the part about Andrew’s wife....”

After that episode Lina recalled that they asked Ettore Soranzo, a member of the Memores Domini who had been working for 20 years for the Custodian of the Holy Land, to help them do School of Community. “He told us about these meetings and said they help them look at things in a different way. We began meeting every two weeks, and in the pages of Fr. Giussani we found a description of what had happened to us. First we lived something special, then we understood that Fr. Giussani was speaking about what we were experiencing. At this point Christ, who made Himself seen through those people, had won. Life is the same, but we are different.”

In the meantime, their friendship with the Italians continued. There was an invitation to the Meeting of Rimini and other occasions to see each other again and get to know better the life of the movement. At a certain point, Enrico and his friends heard that the Custodian of the Holy Land was raising funds to buy the homes of Christians who were leaving Bethlehem because these buildings usually ended up in the hands of Muslims, making it even more difficult for Christians to return from abroad. It seemed like a beautiful idea for helping their Palestinian friends, and they asked Lina’s opinion about it. She was, however, displeased with the idea. “Enrico, we don’t need your money. We need you to bring us what you are already giving us: your friendship. Use your money to continue visiting us.” It was not a matter of refusing material help, but for Lina there was something more urgent. “We labor in charitable works, but we’ve learned that in order to take care of others, you first have to take care of yourself.”

However, the flight of Christians remained a sore point, including for some of the “touched.” Wafa explains, “I was convinced that being a Christian in Bethlehem was a punishment, and I had already decided to leave because I wanted a better life for my daughters. I thought they would have no future here. I wanted to be free, not closed up in this open-air prison. But then I began to look at myself through the eyes of my Italian friends. People come here not only to see the stones that Jesus walked on, but also to see the ‘living stones,’ that is, us. If we leave, there is less of a possibility to encounter Christ in these places. Today I know I have this task. To remain.”