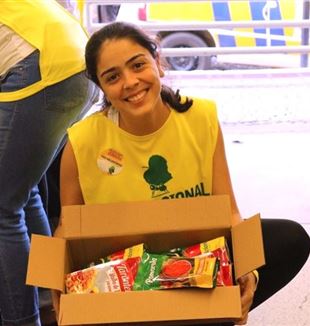 This year, for the first time, I did not do the charity food collection in Londrina, in "my supermarket". It was surprising to see how, no matter where I was, the food collection was something that was "mine", something that had great meaning, that went beyond collecting food for an institution: it went beyond me. Its essence, in fact, was to bring forth this invitation to everyone, to share it, because “life is worthwhile”. For the first time, I approached many people bringing forth the proposal for reflection that this day entails, something which I had never done before. I was surprised by the reaction of the people: many were interested, but many felt uncomfortable. One of them, however, came back with a donation and said to me: "I really think that life is worthwhile".
This year, the food collection really made me understand the meaning of the phrase in the thank-you note: "Sharing needs means sharing the meaning of life". It was fundamental to have lived this experience alongside all the people in São José do Rio Preto: I found a companionship that reminded me of the value of the food collection, both for me and for everyone who was there with me. It was fifteen hours of work that tired me physically, but it gave my soul more life.
Maria Theresa, Londrina 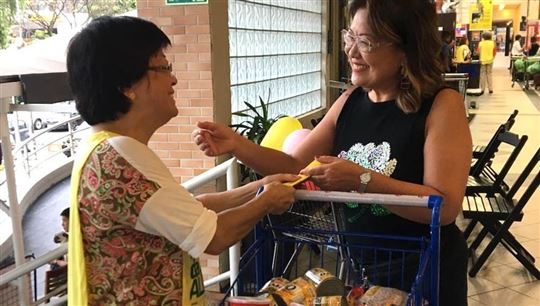 For me, this year's experience of the food collection was an opportunity to learn to see the beauty of what Christ makes happen in my life and in the lives of my friends, making me free and full of gratitude. Before, faced with the unexpected, I felt sad and oppressed, and I "oppressed" others. After the gesture of the esquenta (a few days that we spend together to help us prepare for the food collection), I was surprised to see many new people and very few people from the community. On another occasion, this would have been reason for recrimination. But this year, I was at peace and was grateful for those who were there. It was a beautiful day, with songs, games, fascinating dialogues.
I asked a friend of mine, who is a priest and who works with me, to celebrate Mass at the beginning of the esquenta, to remind us of the reasons behind the gesture of the food collection. He had an appointment right after Mass, and we agreed that he would leave immediately afterwards. Instead, he stayed around to talk to people for a long time before leaving.
On Monday, when I arrived at work, he had already told some colleagues that the gesture had been very interesting, that I had been happy to see families involved in such a beautiful gesture of charity. And he said to the building's doorman: "You have to become part of Angela’s movement. There are many families and they are fascinating people.” I was also impressed by the dedication of the coordinators, who even helped each other pay for the banners, and some even paid more to help those that could not put in their share.
Even though we collected less this year, I was able to perceive concretely what was mentioned in the "10 lines" of invitation to the food collection, that life is worthwhile and that the joy and beauty of participating in the collection is the beginning of a novelty. Three young families with small children, aged between eleven years and two months, covered, by themselves, an entire store. The husbands arrived early, at the beginning of the day, and their wives arrived later, bringing with them children who were two and three months old.
I stayed with them for a while and my heart burned when one of the young girls approached people with her parents, happy and tireless, even at the end of the day. Every time they have something, she was excited. When the truck arrived to pick up the full boxes, we asked the driver to first go to another supermarket and come back half an hour later, because we wanted to organize the products that had not yet been boxed. We didn't want to do things badly. They told me that they will do it again next year. I can say with certainty: I saw Christ happen in human form, through concrete faces, with names and surnames.
Ângela Rocha, Brasilia 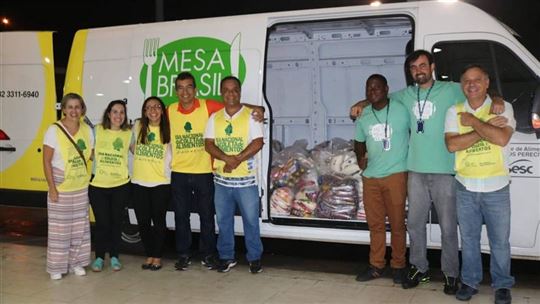 This year, throughout the organization of the food collection, I have understood more deeply the value that this experience has for my life. Obeying the instructions of the organizers, carrying out the activities planned in the agreed times, having meetings with the coordinators, were an opportunity to thrust open my "I" and to meet people who were enthusiastic about collaborating in this great gesture of charity. I was able to realize that, every week, with all the challenges I faced, the desire to communicate this simple and concrete gesture to the world made me a better, fuller, more complete person.
One thing in particular moved me. Alex, who works for one of the charities, has become blind since last year's food collection. His desire to participate was so great that he nevertheless wanted to participate this year, however he could. After some discussion, one of the volunteers took on the responsibility of accompanying Alex in approaching the customers. Alex's mere presence moved the people passing through the supermarket. For me this was a sign of the presence of Someone greater, who went beyond that gesture and
further reinforced my heart's desire to do good. And how beautiful it is to do good!
J.R. Cosmo, Petrópolis 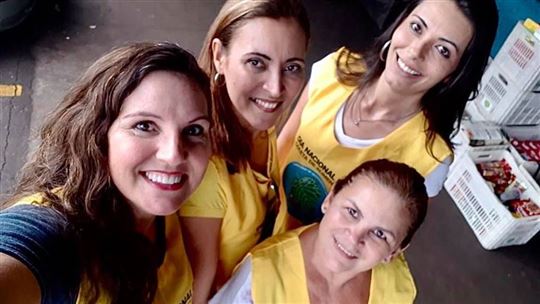 Participating in the food collection was a new experience. In my first year as a volunteer, I was already given the responsibility of managing the counting, weighing and the organization of the donations. It was a wonderful experience and, with a lot of attention and support, the work was done in the best possible way. The involvement of the volunteers and the awareness of the people who donated was, for me, the most significant aspect. I have already committed to participate in the collection, which has given me much joy and gratitude, again next year.
Lenita de Villa, Coordinator of the supermarket in Joinville