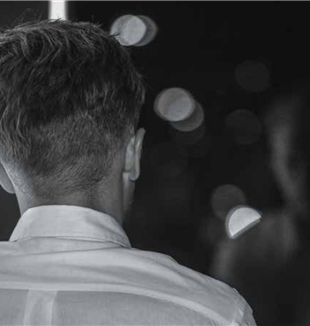 If at the age of 10, you skip school as soon as you can to get away to the mountains, if at 12 you punch the principal and at 13 you jump out of a window to scare the substitute teacher (who does not know about the scaffolding), it is to be expected that at 14 you will be expelled from middle school and have to make up two years of study in one year in order to get your middle-school diploma.

Edmondo was a difficult boy who could not stand “unauthoritative authorities,” as he called them. Today he would have already undergone a thousand psychological and behavioral analyses. Even winning the provincial championship in mountain racing at the age of 15 did not satisfy him. Today, he explains himself candidly, saying, “The people of my town weren’t enough for me. I wasn’t part of them.” And he did not care, not even about worrying his parents deeply when they discovered the bad company he was keeping. In a town of not even 5,000 people in the lower Valtellina area of northern Italy, people quickly know everything about everybody.

This is how Ed, now in his forties, introduces the story of the depths he has plumbed. How deep they were is evident in his intense, good eyes, with a hint of the abyss. Heroin and cocaine arrived even in the Valtellina mountains, and for alcohol he just had to go to the local café in the square. In a short time the costs and the doses rose monstrously. “To get money, I began stealing and selling everything.”

When Ed was 19, his father, a man who had never taken a day off work, decided to take a six-month leave in order to be close to his troubled son. “We had to make up time for a relationship that never existed. For six months he never left me alone even for a minute; at night I slept in his bed with him.” When his father’s leave ended, “the day my father returned to work, I had a needle in my vein within a few hours.” Six months wasted? “I perceived his goodness, but I was an empty vessel that no body could fill.” Once he jumped out of a window 27 feet above the ground from a room in which his father had locked him. “I ran to the station, to Morbegno. I jumped on the first train, and as they were closing the doors, my father caught up with me. I saw his eyes: ‘Why? Come home,’ they were saying.” But this was not enough for Ed.

You have to try them all. He tried a drug rehabilitation center, and managed to stick out three years of work, individual psychotherapy three times a week, and family psychotherapy twice a week. “I learned to know myself and also to understand how lucky I was: it was the time of AIDS.” Things seemed to be getting better, but “one day I discovered that the family psychotherapist was divorced. I thought, ‘And this guy wants to teach me what a family is?!’ I needed people who could show me that it was possible to make it in life, and that good was possible.”

Ed became a graphic artist, and when he left home, he found work in Lecco. He was good at it, knew how to do business, and began earning well. He met a girl, found a house to share, and had a nice car. But not even all this “normalcy” was enough. “There was nothing worthwhile” that could keep him away from drugs and alcohol. He abandoned everything, or more accurately, destroyed everything once again. His life was an endless flight.

One evening, absolutely desperate, his father told him, “I don’t know how to be a father. If you know how I can help you, tell me.” This time Ed went to a detox center in the Turro section of Milan. But not even that could work the needed miracle. One day Ed stole a car and after a desperate flight ended up in the police station. Given his fat file of previous run-ins with the law, he was sent to jail for three years, one on conditional release.

Behind the bars, he had a strange sensation, “almost a liberation. I fooled myself into thinking that prison would redeem me.”

His cellmate was Dario. When he saw Ed in such bad condition, he ripped his sheet in half and called the guard, “Take him away to the shower, please.” When Ed returned he found two pork chops waiting for him. “In prison they cost a fortune.” One day Dario suggested that Ed interview for work in the prison printing center. “They teach you to use the computer; you learn a trade, and you do something.” Not terribly convinced, Ed went nonetheless. The director, Patrizia, told him, “I trust Dario, so if he trusts you, you can work here. We begin every morning by praying the Angelus.” Ed thought, “These people are crazier than me!” but he did not leave. Every day he showed up for work on time and even stayed when they did School of Community on Fr. Giussani’s book Is It Possible to Live This Way? He thought, “How can this priest know me so well?” Patrizia’s words found an opening in his walls. A month before leaving prison, Ed wrote Patrizia’s cell phone number on a little piece of paper, stuck it in his pocket, and forgot about it.

January 6, 2010: “Edmondo, you are free to go,” a guard told him, throwing two trash bags of his belongings at his feet: dirty clothes and a disassembled cell phone. When the prison gates closed behind him, he had nothing in front of him except a lot of phone numbers of people who in a half an hour could help him take up his previous life again. In a moment that lasted an eternity, he pulled Patrizia’s number from his pants pocket. “I’m Ed. Can you help me?” Patrizia had pneumomia, but within a half an hour her husband Fabio arrived. “You’re Ed, the prisoner? I’ll bring you home to your family.”

They lived in Colico. Ed’s father told Fabio, “You don’t understand. I don’t want this son.” Ed recalls, “In that moment, I saw one man who said to another, ‘I can’t manage anymore. I give him to you.’ And when Fabio answered, ‘Okay,’ I had two true men in front of me. Two fathers. I realized I had sunk really low.”

Within a short time, Ed found work and a home in Oggiono, in a house a priest made available to him. For the weekends Filippo, Fabio and Patrizia’s third son, went to get him and brought him to stay with them. A lot of friends, a lot of people passed through their place. “I wasn’t part of that family. I felt like a bum, but nothing of what happened there eluded me.” Patrizia’s elderly mother, who suffered from Alzheimer’s, always welcomed him, saying, “There’s my boyfriend.” In her dementia, “she was my point of good,” Ed recalls. When he found another job in Monza, Fabio and Patrizia decided to host him permanently in their home, since one of their sons was abroad. “I became the owner of the sofa, the remote control and the refrigerator,” but not only that. One evening they needed to bring Ed to the emergency room... Nobody had realized that he had begun drinking again. In a short time he had emptied their wine cellar and refilled the bottles with tea and Coke to imitate the color of wines and liquors. He said, “I’m going. I don’t want to ruin your family, too.” But Patrizia responded, “If you walk through that door, you know it’s the end for you. We love you.” Ed stayed, but Fabio imposed conditions that were almost more rigid than those of the prison: he could never go out alone, could never carry any money, and you could not get his driver’s license back. “Looking at him, I asked myself, ‘How can a man be so certain he can trust someone like me?’ I had encountered the mystery through Patrizia, and now I was becoming a son again with Fabio. If I wanted to grow up and understand the spark I saw in them, I had to entrust myself completely and be loyal to what they were asking of me.”

Time goes by. Every day since then has been a step forward toward understanding the reality that entered his life. Today, Ed has stopped escaping. His cup overflows: “I had to go through all those experiences to become what I am today: a happy man.” He is married to Rosanna and has a son, Francesco, a lot of friends, and a certainty: “My strength is the presence of Christ that supports me and is always there.” And his weaknesses? “They were the modality for encountering those eyes again for all time. When I see a beautiful car I think that if I stole it it wouldn’t change anything, and I say, ‘My God, thank goodness I have met You.’”

When Francesco was born, Ed called his father, who said, “Give him a kiss from me, then go home and thank your friends.” As they were speaking, Ed thought of Nicodemus: Can a man be born again? Ed is convinced that “yes, he can. And how.”