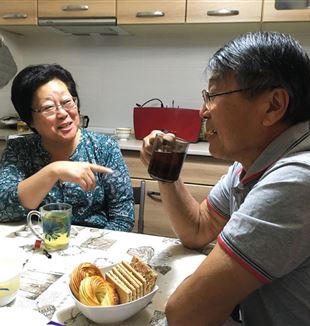 "I'm sure the good Lord loves you specially..." "Clearly," says Valeriy Khon dryly, almost without giving his wife Lyubov time to translate. On December 29, at the age of 66, he will be baptized in the Cathedral of Our Lady of Fatima, Karaganda, in the heart of Kazakhstan. "It took 33 years", he explains. He tells us how God conquered his heart step by step, face by face, until, at a certain point, he went to his bishop, Adelio dell'Oro, and asked him for "what I have always had in my hands".

One evening, at the end of the nineties, they sat around a table by candlelight. Back then, in the post-communist period, there was no electricity, “it was almost romantic”, says Lyubov, Valeriy’s wife, who is a teacher. She had met Fr. Edoardo Canetta in 1996. A colleague of hers had invited him to give a lecture at the school. "I’ve never heard anyone speak of religion like that," says Lyubov. She began to spend more and more time with him and his friends from CL. And a year and half, she asked for herself and Maxim, her eldest son, to be baptized. "That evening, a month before the baptism, Fr. Edo wanted to talk to my husband." Valeriy and Lyubov had met in 1980. "It was an arranged marriage within the Korean minority," explains Lyubov. "I was angry with my father because he wanted me to marry this young doctor. But then I was lucky!" she laughs. "So, that evening, Fr. Edo wanted to come and propose to Valeriy that we get married in church.” By then, he had already put away the stethoscope and was working in a mine. "As a doctor, I didn't earn enough to feed my family." He worked underground for ten years, and then as a mechanic. "Fr. Edo explained everything to me. I was an atheist, not baptized, so a 'heathen'. But I told him that I knew my wife and had seen how much she had changed…I trusted her. So I agreed to marry in church.” 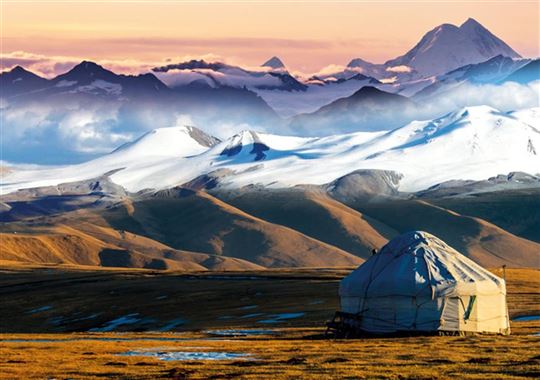 Gradually, what Lyubov experienced with friends of the movement also had an effect at home. "Everything was new for me," says Valeriy. "I observed how my wife and children, Maxim and Aliosha, lived within this community. It was something true, beautiful, right. I wished that they could continue on this path. Personally, I did not feel the need. Faith was not important to me. I was with them with my soul, but not with my head ... It took me twenty years to understand that this was something for me too."

Constant dropping wears away a stone, says Valeriy now. "I lived with them and, without me realizing, Jesus was at work. But I also had to work…I was on my way and had many questions. But, increasingly, I had the feeling that this story was something for me as well". For example, he talks about his friendship with three priests who had come to Karaganda from Italy, at the end of the nineties: Fr. Edo Canetta, Fr. Adelio dell'Oro and Fr. Eugenio Nembrini. Valeriy remembers how they helped him and his family after Maxim was in a serious traffic accident, in a way he had never imagined. And also what the movement has achieved in Aliosha's life: From an early age "we always had quarrels and problems with him". Now, he is a family man and lives in Italy. Valeriy says: "When I look at my sons, I am happy and proud of what they have become".

"Tell then about when you were at the meeting…”, interjects Lyubov. And then she recounts: "Eight years ago, he was invited by friends from Italy to the Meeting in Rimini, and he accepted immediately. He had no idea what it was, but he didn't hesitate. He even prepared himself by trying to learn Italian, at the age of sixty, for a year. If you know him, that alone is a miracle..." Valeriy smiles. "I don't know when I first spoke about Jesus. But He always passed through the faces of friends. Quite simply.”

Last year in February, Lyubov and Valeriy were invited to attend the meeting of CL leaders in Vilnius (Lithuania). Before that, at the end of January, they made a stopover in Germany, where Maxim and his wife, Mascha, now live with their children. "Even after 38 years, I met two former fellow medical students who live there," Valeriy says.

A beautiful encounter full of embraces and memories. Shortly before leaving for Lithuania, Valeryi, at dinner, tell his son about meeting the two ex-students. He tells him that, despite a successful life, they are dissatisfied and sad and have problems with their children. "Dad," Maxim asks, "what does their life tell you? You can't fool yourself anymore! Why don't you get baptized?” “He did not answer," reports Lyubov. "He did not say anything about it throughout the whole journey to Vilnius.” "I was thinking!" explains Valeriy. "In the face of these two friends, I realized that man cannot live without faith, without a foundation. And that only God can give you this root. I had experienced that and I still experience it today."

As soon as they arrived in Lithuania, Valeriy visited Fr. Adelio, who was also at the meeting of the responsibles. "I hadn't even talked to Lyubov about it, but I told him everything. And I asked to be baptized. Because without faith there can be no depth to life."

The date is set for the end of December, so that all his friends can participate in this "rebirth". Maxim and his wife, Mascha, will be Valery's godparents. "A few days ago, we went to Fr. Adelio's catechism class," says Lyubov. "He explained Christianity to Valeriy using the sketch that Don Giussani always drew for his students on the blackboard with the X and the arrows. And we were very moved. For over twenty years, Valeriy had asked me, almost every day, ‘Are you going to Mass?’ Now he asks, ‘Are we going to Mass?'"