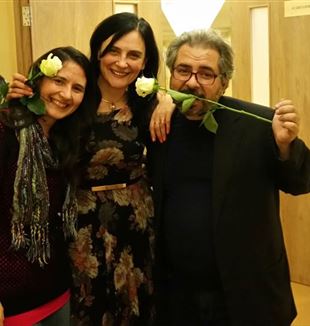 “Every baptized man and woman is a mission”, says the Pope. We don’t need any special characteristics or to graduate from the missionary department to bring Christ into the world; the only thing necessary is to embrace and try to live, in our daily lives, the grace we received in Baptism, that is, this infinite mercy of God who wanted to make us, literally, members of his Body. This was also the reason why Fr. Giussani did not consider traditional vows for the members of the Memores Domini association, to which I have belonged since 2001. "The Memores Domini association does not require the explanation, of the classic “vows”, of the perspective of life to which one commits oneself. This not because of a kind of reluctance, but because it seems to us that Baptism and Confirmation suffice to establish a total dedication to Christ and to the Church, without having to resort to the formal characteristics of religious life which are expressed precisely in these vows. My image is that of a lay person who freely lives an existence completely immersed in the world, with complete personal responsibility.”

When, in the summer of 2009, during the spiritual exercises of the Memores Domini, a request was made for availability to go to Moscow to teach Spanish at an Orthodox university, my heart did not hesitate for a moment to put Samuel’s answer before the Lord: "Here I am, Lord, I come to do your will". This was a response that was not born from reasoning and, even less, from a special “missionary” will or restlessness within me. Let me describe the background to to this story. At that moment, I had a job that I loved, a beautiful experience of community life, a good family situation and, most of the time, a quiet one... in short, I had no desire to give up that life. Furthermore, working in a university had never attracted me and, in fact, it was something I had given up "on principle" in my professional life. In that situation of pleasant harmony, there was only one point of restlessness: that very summer before the exercises, I had the strong impression that I was "getting used" to everything I had and I had the desire not to lose the importance of the Mystery. 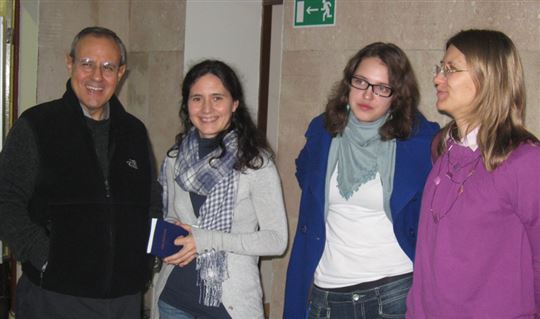 On the first evening of the exercises, Julián Carrón began by asking if there was anyone, amongst those present, who could still say, after so many years, that Christ was the only thing- the only thing!- that is necessary to be happy. That question struck me like a dagger. Of course, everything I had, I attributed to Christ; I would never have separated what I considered gifts (house, work, family, friends) from their Giver, and I always gave thanks for them... but its was a customary feeling... what if none of it were here, not my house, my work, nor my friends? I, in my experience, in this moment, with nothing to sustain me, could I say that the only thing I needed to be happy was Christ? That’s why, the next day, when they asked for availability for Moscow, in an advert that lacked my name (since the profile for that position coincided with mine and perhaps with that of one or two more of the more than 1,500 people that we were there), I could not help but sense the voice of the Lord who, like Peter, two thousand years later, said to me: "Isa, do you love me? Can you still say that I am the only thing you need?” And I, with my experience of those years, full of errors, of weakness, of sin and, above all, of certainty in His love, could not help but answer like the apostle: "Yes, Lord, you know everything, you know that I love you".

This is how my muscovite adventure began, which has lasted almost ten years - from September 2009 to May 2019 – I didn’t leave because I was looking for something I lacked, but because I was certain that I already had everything. These years have been precious and very intense. Facts, like life, equally painful and joyful, of sacrifice and hope, of risk and certainty. It is very difficult to summarize, in a few lines, what I have received, all that I have learnt and that I do not want to lose from this experience. I will try to summarize through two points that have been fundamental to my journey in faith during these years and that have allowed me to enter, a little more, into the knowledge of the Mystery of Christ. 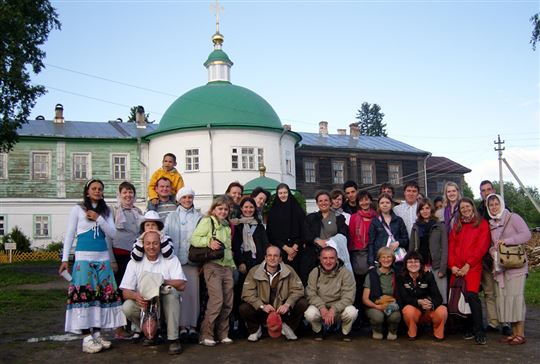 The first was the encounter with faith and with the Orthodox tradition, with this "other lung of the Church", to recall the expression of Saint John Paul II, and the discovery that it is not a hostile or even a distant relative, but really a common experience, of real fraternity - wounded, very wounded, but intact in its roots and in its salvific essence - living and which, truly, can "breathe again with two lungs". I remember that, when I started working at St. Tikhon’s Orthodox University (a university born from a fraternity of orthodox priests, as a work of charity after the fall of communism and which now has nine humanities departments), an Italian friend, who already worked there, told me that, for her, her work was like the opportunity to put a little ointment in Christ’s side wound. That phrase was imprinted in my heart and has guided me in my work for all these years. The surprise was to be able to live the unity within the wound, to experience a deep companionship, from faith, with friends, companions, orthodox students who have been witnesses of the proximity of Christ and that have been, for me, that same ointment. An experience of unity that has occurred on many occasions and that I have been able to experience and enjoy in the whole breadth of the Church, whether among Catholic and Orthodox friends, as well as in relation to the experience of the different ecclesial realities (CL, Neocatechumenal Way, Focolare Movement, Opus Dei, Society of Jesus...). I have truly been able to touch the whole breadth and depth of the Body of Christ. This unity between the Churches will probably take many years to become officially visible, it will certainly not be achieved at a hierarchical level in the coming decades, because there are still many pretensions, many prejudices, many historical wounds and, above all, a lot of politics. Until we learn to give to Caesar what is Caesar's, we will not give to God what belongs to Him either. But I have learned, I have lived, I have foretold this true unity, which is born only of Him and from what Baptism does within us, when we let its effects define us. 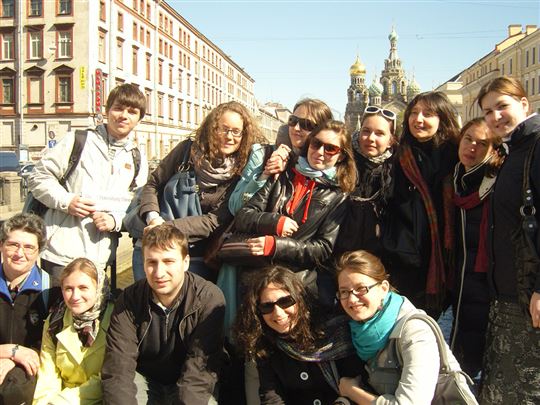 The second aspect has been the discovery that mission is, above all, for oneself, because it coincides with that journey into the deepest part of one's being, because only when you find Christ "who lives in you" can you take him into the world. Before leaving, a friend gave me a card with a phrase by Fr. Giussani, who had said to someone who was going on mission: "You go there to live your relationship with Christ and that's it". This phrase has always been on display in my room, and on my door, are the words that Moses addresses to the Lord: "If you do not come with me, I will not move from here". I could not leave my room without reading them. I can say that these years have been a way to undertake this journey towards the knowledge of myself in order to be able to begin to free myself from myself. Because, in this journey, I had to deal with everything that we carry within us and that we never want to look at, weakness, uselessness, our own evil, impatience, the falsehood of our own image, the most absolute maliciousness. No, I am not exaggerating. I have seen each of these things come to light in bigger and smaller examples (which I will not list), but all of this was necessary, as Mounier said ("it is necessary to suffer so that truth does not crystallize into doctrine"). And the truth, the truth of myself, is what St. Paul proclaims: "When I am weak, then I am strong". Only at this point of encounter with one's own helplessness is the pure and simple awareness born- charged with sweet pain- that my nothing is redeemed and saved by his All. The awareness that it is enough to recognize my need for Him in order to feel His embrace again. I remember a moment that implicated both a before and after on this journey. I was going through a rough time, hurt by wounds within very dear relationships; I felt a little abandoned and, perhaps, betrayed. Furthermore, work was weighing me down and I kept telling myself that what I did there could be done anywhere else - nothing special. The language also gave me a headache and, within the life of the community, I also felt quite cold and apathetic... in short, I could not see what we think are the "fruits of the mission" anywhere. One day, in this state, I fell on my knees and, while praying, I realized that all of this circumstance was privileged for me. It was the Lord who, like a jealous loved one, was saying to me: "Isa, I am not going to let you cling to anything that is not Me. Not friendship, not success at work nor ‘mission’. Nothing. You only need me". When I perceived this, I was filled with immense peace and tenderness, and it was the beginning of a liberation that allowed me later- and continues to do so now - to enjoy, more and more, everything I encounter, from people to work, everything. Because I had begun to release the burden that normally prevents us from this joy, the burden of the "I" itself, of the mania of being the center of life and of not giving Him space, who is the only one who can really love all that we are. 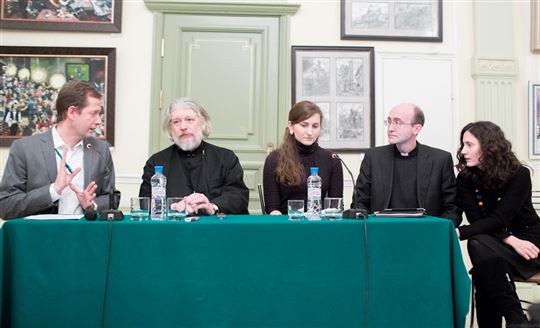 When one comes to this awareness of oneself, one becomes a missionary, because the certainty of being loved, of sharing in Love, is reflected in your face, in your actions, even in the most daily and apparently small ones. These ten years have given a lot and I have been given a lot to see. I have witnessed great miracles, lives touched by the hand of the Lord; I have done great things with the friends of the CL community and with others, cultural events (exhibitions for the Rimini Meeting, and in different parts of Russia), academic agreements (between Orthodox and Catholic universities, and with schools), meetings with people from different countries where I attended displays of forgiveness and reconciliation that are unthinkable for some- between Russians and Ukrainians - and so on. But, although it may seem surprising, it is not these things - big, beautiful, full of meaning - that move me the most; what is etched in my memory are the words and reactions of some people who, before returning to Spain, have told me, in different ways, that their lives have been "touched" by our relationship in these years. And this moves me precisely because they were not people with whom I had consciously involved myself, on the contrary, there was nothing in those relationships that indicated to me that something was "happening" and yet Someone was happening. Through me, in my everyday life... and without me noticing. Our yes, in what we do, wherever we are, is enough for Him to pass and to change our heart. And, as a friend told me some time ago, "we have no idea of the dimensions of our "yes".