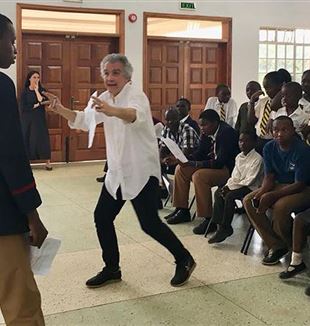 Dante Alighieri is conquering the heart of Kibera. In Nairobi, there is no other place like Kibera: here you find the largest slum in Africa, inhabited by 800,000 people, whose median age is inversely proportionate to the aging populations in the West. In Kibera, a school called “Little Prince” was opened in 2000, supported by AVSI. Given the circumstances, it boasts surprising numbers: an eight percent dropout rate, compared to the average of 35 percent in the other schools in the slums. The fact that attendance is that good is at least in part due to the theater. Some years ago, the teachers discovered that it was a major motivating factor for the kids: they experienced it as a form of expression that corresponded to their needs and desires. The stage was the space where they could release their freedom.

The results can also be seen in terms of quality–in 2016 their performance of Pinocchio won the international prize awarded by the Collodi Foundation. The stage was small and the theater was inadequate; it was not right to betray the treasure that the theater brought to the children. Therefore, it was necessary to find additional resources. The first to answer the call from Kibera was the actor Franco Branciaroli, who had launched fundraisers at the end of his shows in the Piccolo Teatro di Milano. The idea grew, the friends of Emanuele Banterle joined, and together with AVSI and the Incamminati Theater Company, an idea came about to dedicate the theater to Banterle (who passed away in 2011) and to seek support from the many people who knew him and admired him his work, which was always tied, with great passion, to theater. The funds were raised and the renovations were made possible.

In a dark jungle.
As often happens, this good idea spread like wildfire. What if this project, which had generated so many positive things, was implemented in other schools? It was then that Dante came onto the scene, thanks to another protagonist of the Italian theater, Marco Martinelli, the founder of the Albe theater company in Ravenna. “When they asked me to participate in the second phase of the project in the Emanuele Banterle Theater, I was very busy,” said Martinelli, “but, listening to the stories told by Emanuele’s friends, I gave in: I had to find the time to go to Kibera.”

And so it happened. There were two trips, accompanied by the actress Laura Redaelli, to put the project into motion, following a philosophy already tested with youth in many marginalized schools in Italy. The model involved a collaborative choral performance displaying the kids’ improvisational abilities in the context of famous lines from great authors. In Kibera the author selected was Dante. “An author of his caliber is a universal archetype,” explained Martinelli, “and with the 200 children and youth from the four schools involved in the project (including Little Prince, and in other parts of the city, the Ushirika Centre, Cardinal Otunga High School, and the Urafiki Carovana School), we intend to bring to life the Divine Comedy in the context and imaginative realm of the slum.” Like Dante’s masterpiece, it starts in a dark jungle where Dante is lost. “In his humility, knowing that he will not make it, he seeks help in order to escape. He finds himself facing beasts, which the youth have reimagined to a situation that is familiar to them: there will be elephants and snakes, for example.” The youth were also tasked with giving new names to the circles of Hell. Martinelli continued: “Immediately, they designated a circle for those who harm children, a problem that is unfortunately common in the slum. The other circles will be the product of the work of the following months under the guidance of their excellent teachers.” 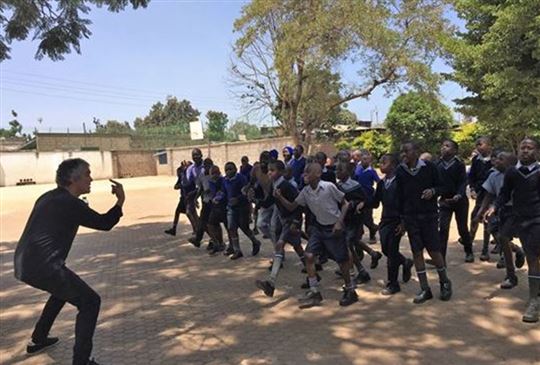 The sun and the other stars.
Antonino Masuri, who works for AVSI in Nairobi, commented on Martinelli’s method of working with the youth: “This is what the theater needs: to help our children be themselves, to understand their infinite value, to channel the energy balled up inside them, which is the result of everything they go through, into a positive outlet.” He described an event that happened at the Ushirika School: when asked by one of the kids what his treasure was, the director answered: “My wife!” “A second of silence filled the crowded room,” said Masuri. “Everyone heard him say the truth: he was in a room with many children of teenage mothers, in a place where AIDS affects many. And he was testifying that true love is possible, that it exists and can last.” At the end of this journey, in October, the show will be performed twice, once at Little Prince and once at Cardinal Otunga, to give all the families a chance to see it. Then there will be a grand finale in Kibera, when the youth will march in procession down to the central square of the slum, repeating, steady as a drum, the verses of Mayakovsky about the stars (“If the stars shine, does it mean that someone needs them? Does it mean that someone wants them to be?”), alternated with those of Dante. (“Love that moves the sun and the other stars.”) Martinelli concludes with an initial analysis: “I have found such energy of life that I could have never have imagined existed in these circumstances. I was struck by the complete openness of the children and their teachers in following the project. They immediately clicked with the idea. Meeting them and working with them, it is clear that for them school is a place of happiness. Many of them were children living in the streets, who ate once a week, sniffed glue, and hid in the trash. For them, a plate of rice and beans is a treasure.” And what more can the theater give them? “The awareness of feeling like flower buds springing up even amidst refuse. It is the desire for a better life that burns inside them.”