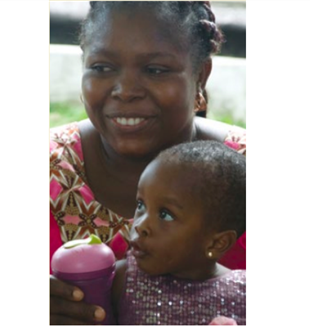 Her name is Joy, and that’s not a fabricated name to put in print, even though her story has a lot to do with certain aspects of Evangelii Gaudium. Especially with the part the Pope dedicated to a “Church whose doors are open,” that “is not a tollhouse,” but the house of a Father “where there is a place for everyone, with all their problems.”

Joy is a Nigerian woman from Lagos, and she met CL when she was 16. Now she’s 38. Three years ago, she found herself pregnant and unmarried. The world was caving in around her. “In the African culture, having children outside of marriage is shameful, especially for a girl who comes from a Christian family. I was paralyzed and confused. I did all I could to hide what was happening, but I couldn’t hide it forever. People started to talk, to judge me. One day, I gathered my courage and went to talk about it with Barbara.”

She would never have expected the answer her friend from the Movement gave. “She immediately gave me a long hug. Then she congratulated me saying, ‘This is a sign of Jesus’s love; He wants to show that He loves you and, through you, He wants to bring another human being into the world.’” This opened a window full of light into the darkness that had consumed Joy. “She didn’t say to me, ‘you’re a bad person’; she showed me that what was happening to me, even if it originated with a mistake, was something good. I immediately felt alive again. I got moving, taking initiative, and not caring what other people were saying.”

She started wearing maternity clothing and decided to go and tell her parents. They took it hard, “but when they saw that I was happy and full of life, they too accepted what was happening.”

And so a baby girl, Jigh-Jigh, was born. This may also seem like a made-up name, but it’s real (it’s pronounced Gigi, from French fashion). She became the mascot of the CL community in Lagos. “They poured out all the affection they had for me onto my daughter as well.” When her pastor was somewhat resistant to baptizing her (he wanted the assent of the father), another friend from the community, Francis, went with her and helped convince him, vouching for her. “My friends have offered a true embrace of my life.”

A few years later, Joy ran into an old schoolmate again in her village in northern Nigeria. They started to date, even though she lived ten hours away. After a year, he asked her to marry him. At first, she was very hesitant, but then she said yes. They were engaged, and after a few months Joy found out that she was pregnant again. In the meantime, however, things were getting worse up north because of the conflicts between Muslims raising livestock and Christian farmers. Her fiancé’s visits came less often. When it was time to give birth, he wasn’t there to take Joy to the hospital. But Luisa, a friend from CL, was. At the hospital, they asked for her husband’s signature that he would help with her recovery. Luisa took care of it, and Joy went to the delivery room. The doctors thought the father was at work, but would come later. When she came out of the delivery room, it pained Joy to hear, once again, “When is your husband coming?” All the history of frustration and sense of abandonment came flooding back to her. “But when I heard how confidently Luisa answered, 'I’m here, what’s the problem?' I understood that there was someone there with us, who was taking care of us. And I was joyful again.”

Still now, a number of weeks after the baby was born, people ask Joy why the father hasn’t come to see her and his new daughter. “In their words, I hear that judgment about me and my life once again.” The doors of the Christian community, of the Church, however, are always open to Joy, who is embraced time and time again by the gaze of her friends in the Movement. “They continue to remind me that Christ’s face is there in every aspect of life. Jesus doesn’t separate the terrible things that we do, that I have done, from the beautiful ones. He is in all things. He is always there with us. Reality is truly beautiful, even with all the difficulties we are asked to go through.” Fittingly, her second daughter is named Miracle. And this also is not a made-up name.