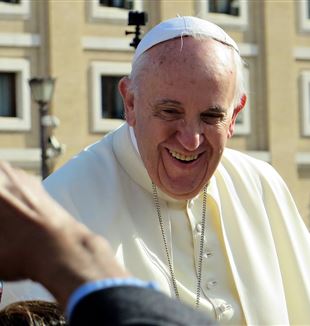 On Friday, June 2, 2017, Pope Francis met with the middle school kids of the Knights in the Paul VI Hall, at the Vatican. Thousands of kids from all over Italy and many other European Countries gathered to express the desire of sonship toward the successor of Peter.

The experience of the Knights started in Milan, Italy, in the middle of the 1980s. Fr. Giorgio Pontiggia noticed that all the attempts made until then, to educate middle schoolers according to the charism of CL, were inadequate. Usually, a sort of simplified GS was proposed, with varied degrees of success.

Fr. Giorgio wanted to teach and to live with them in the same way he himself lived in the Movement, but he understood that a new form was necessary. This was the beginning of the Knights, with the first group called “The Searchers of The Holy Grail”.

The main aspects of the genius of CL were preserved, namely a method to judge everything and a friendship to accompany you, but this was shared through singing, playing, discussions and whatnot.

At his past meeting with Pope Francis, three children were able to ask a question of the Pope.

Marta, an eighth grader, expressed her honest fear of growing up and moving on, leaving the Knights behind. Pope Francis told her that fear of growing up is like putting up a wall; that doesn’t allow us to see anything behind it. But we need to live like we are in the countryside, where there are no walls and we can see the horizon.

Giulia has great dreams and asked Pope Francis what a girl her age can do to change the world. Pope Francis responded with an analogy of a close hand and an open hand. If we have a piece of candy we can either open our hand and share it with a friend, or close it and wait for that friend to leave. The same is with the heart. Only an open heart can change the world, not a magic wand. 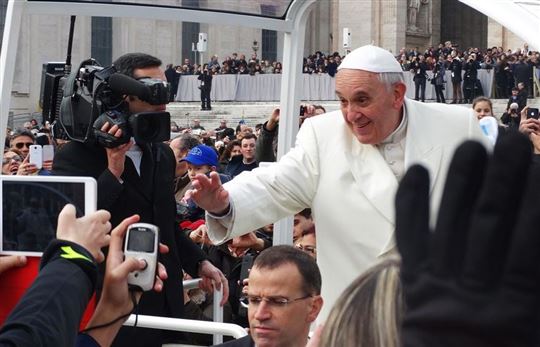 Finally Tanio shared his dramatic life: he was abandoned by his parents and adopted by an Italian family when he was five; a year later his adopted mother passed away and he and his father went to live with the grandparents, until recently when they too died. Then he asked how we can believe that God loves us, when so many bad things can happen. After a long pause in which Pope Francis was visibly moved, he said that there are questions that can never be answered. There is no way of knowing why such things happen. And yet we can’t doubt God’s love because he still puts people in our life who love and sustain us. Furthermore, if we look at the Crucifix, we understand that even in suffering there is a meaning, despite the fact that we might not know it.

This is not the first time His Holiness granted an audience to the Knights; last year the nights from all around Italy made their Promise with the Pope in Rome.

The Promise is one of the central moments of the life of the Knights. It is a retreat, and at the end of it the kids make a promise of fidelity to Jesus for a year. During Mass, kneeling in front of the tabernacle, they all recite together, “We are yours and yours we want to be.”

At the end of the meeting the Pope, the kids said together the Prayer of Consecration of the Knights, which was written by Fr. Giorgio:

Jesus, my Lord and my King, you, who humbled yourself and shed your blood for my salvation, guide my steps towards you, who are the way, the truth and the life. Grant me intelligence, a thirst for truth, a strong arm to defend it, and a courageous heart to witness to it. I offer to you my very self, my study and my play, my words and my silence, my tears and my joy, by following the friendship you have given me as a sign of your presence, so that my life may be fulfilled and the world may recognize you. Mary, Queen of angels, sustain my prayer.

The Knights began in the United States ten years ago, first in Washington DC, then in Massachusetts, Colorado, Texas, California and New York, and more groups are starting all over the country. The very first Promise took place in Auriesville, NY, at the Shrine of the American Martyrs in 2009.

Fr. Marcello Brambilla, the international leader of the Knights, noted in his opening remarks to the Pope, that the kids were on “a journey, whose purpose is to simply recognize that life is beautiful because Jesus loves us”.

This is who the Knights are.