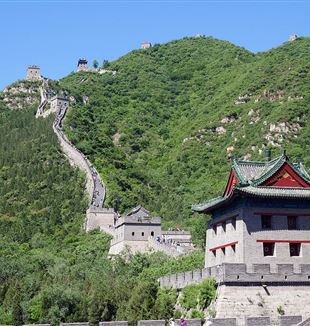 On Saturday morning, those gathered for Morning Prayer limped through the psalms, some struggling to follow the words, their eyes fixed on the booklets, others totally unfamiliar with the recto tono or even the psalms. It was the first day of the Spiritual Exercises of the Fraternity in China, with about 50 people of different nationalities and ages, who had arrived the previous evening from all over the country. They had encountered an unexpected newness of life at work, at the university, through a friend or a fiancé, and had been moved to communicate this newness to friends and relatives, and to invite them to the Spiritual Exercises. Each person had a different story. Some of them were not Christian. Some instead had been living the experience of the Movement for years, and found themselves because of their jobs catapulted into the country of the dragon.

Future bride. After Morning Prayer, the first lesson was held in Chinese, about the story of the yes of Peter, which made the title of the Spiritual Exercises concrete: “I have loved you with an everlasting love. I have had pity on your nothingness.” The silence was profound. There was only a gentle murmur in the corners of the room from the simultaneous translations into Italian, Spanish, and English, the latter added for some friends who had arrived at the last minute.

Lunch was a Babel of languages, in which everyone nonetheless tried to communicate, to get to know each other, resorting to gestures when the words were lacking. There was no sense of being an outsider, because something had happened, prompting one of the participants to say, “I feel at home, as if I were with my family, and yet most of these people I have never seen in my life.”

In the afternoon, after the time of silence, everyone worked together on learning the songs and the recto tono. There was a striving for that extra step that animated and united everyone. Afterwards, in the testimony of the prisoner that Fr. Julián Carrón had read in Rimini, Mercy became an embrace, the motor that moves life. This was felt that evening, when Piero and Maddalena, Italians who are in China for work, talked about what it means concretely to support each other in the friendship with Christ in their families, and how that friendship impacts others in their lives, such as neighbors or their children’s teachers. Maddalena talked about a Buddhist mother who had lived with her partner for years but decided to get married because, as she said, “I want to have the same seriousness you have in your relationship between husband and wife.” For the wedding, she asked Maddalena to choose a text to read during the civil ceremony. Maddalena thought about it and chose a passage by Pope Francis on love, but a few days before the ceremony began to doubt her decision, thinking maybe it was too “Catholic,” so she had the future bride read it. The woman burst into tears and exclaimed, “There is nothing more beautiful that I would like to hear on the day of my wedding. You must help me in the search for my spirituality. I need someone to accompany me because I am looking for God and I see in you a companion for my search.”

There was not enough time. On Sunday, the Morning Prayer and Mass were something entirely different from those the day before. Something had happened. The afternoon assembly was a clearer testimony to this.

Xiao Mei spoke about her colleague, Wang Min, with whom she felt an immediate compatibility, and not just regarding work. After some time, Wang Min told her that she was Catholic, and added, “After my Baptism I felt a bit abandoned, but I have found a place where I can live my faith and be accompanied in it. Come and see.” Wang Min invited Xiao Mei to the School of Community. Right away, the first time she went, Xiao Mei experienced a new beginning that she could not keep to herself; she invited a friend and her mother to the Spiritual Exercises. Her mother accepted the invitation because she saw her daughter returning from the meetings of School of Community very happy, and wanted to understand why. When the mother arrived at the Spiritual Exercises, seeing such diversity among the participants in terms of nationality, age, and culture, she was afraid she would be out of place, having come from a farming life in northern China. Instead, “Ever since I was baptized, soon after my daughter, I have realized that my life is richer, and I have more experience of this richness now than in the 60 years before. In these days, I have become aware that actually we have a language that is superior to spoken words: the language of the gaze. I feel that I am exactly where I am supposed to be, now.”

Truly happy. Pedro and Rosa arrived in China from Central America to be with their daughter. They were no longer young. Chinese was an unknown language and they could only string together a few words in English. They felt alone and disoriented, especially when their daughter unexpectedly had to return to their country for a long period. Then at Mass they met a priest and began a friendship with him. “He invited us to the School of Community and always made sure there was a translator for us. We have been living an experience of faith and companionship that we never had before.”

In contrast, there were those who went to the School of Community to please their fiancé. “I was reluctant to go,” recounted Yue Liang. “I have never liked meetings, but there I met Piero and Maddalena and their families. They were truly happy. They were different from my colleagues, with whom I got along just fine. But these two had an accent of joy I had never seen before, and didn’t want to do without.” She did not give up, and returned even without her fiancé. “I felt all the intensity and seriousness of the choice I was about to make, to get married and share my life with him. In the dialogue with these friends I saw what my heart desired, even if in a confused way: to build a place of peace and joy. Otherwise, what’s the use of getting married?”

The testimonies continued one after another. But there was not enough time for all of them. After an hour and 40 minutes it was necessary to close, so that there would be time to watch the video from the presentation of Pope Francis’ book, The Name of God is Mercy, and to hear the testimony of Agostino Jiang, a Chinese man who had converted to Christianity when he was in prison. Those who did not get the chance to share their testimonies during the session did so in writing. This was the case of Li Wen, a friend who was not a believer. She had gone to the School of Community for the first time at the insistence of a dear friend, but her initial impression was negative: it seemed like a group psychoanalysis session, and she certainly had no need of that, since she had no problems.

Li Wen’s steps. However, she returned because, as she wrote, “I was curious to understand his insistence. Over time I felt increasingly comfortable and at ease. The people shared their daily struggles and it no longer seemed like something embarrassing; rather, it seemed stupendous to have this concern and care for oneself. I understood that religiosity is something mysterious, not easy to explain. I liked it yesterday in the lesson when it was said that Mercy is Mystery. These are concepts that I have found only here, and I am so interested to learn them. The more I explore this religiosity, the more I understand my humanity. I see that through a new joy God is helping me to take steps, and makes me feel the affront of daily life as more bearable. I have learned that God is good, a companion for my soul.”