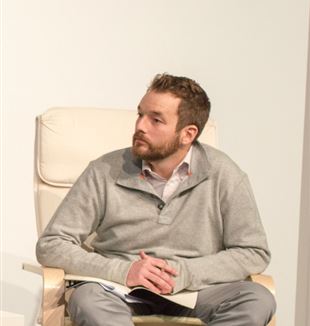 Sometimes in life we have the grace to be open to an experience that brings together your whole life, gives meaning to your present and the present of another person. This was my experience this past week as I screened my first film Full of Grace to a group of 100 Palestinian Christians and some Italian friends.

In Bethlehem, the Christians live in a ghetto, an 800km wall has been constructed to contain the Palestinians which limits the ability for people to travel. We all have heard the news about the violence here, which is very real and the people we met have a justifiable anxiety about the situation. Screening our film with this cultural backdrop made me return to the reason why we made it: to help people return to that original encounter with Christ which changed their life. I told them in my intro that our circumstances are different in the US and Palestine, but the problem is the same: is Christ enough for living, can he make us free in difficult and challenging circumstances?

This movie came from the questions the director, Andrew Hyatt and I had about the essential elements of Christianity. What emerged was a very unique film, more akin to a prayer than to a traditional blockbuster. For this reason I was both nervous and curious to show the film to the people of Bethlehem, who have suffered greatly over the years and are facing even greater challenges at the present time. How could an art-house bible film about Mary and Peter help in this moment? But, the film has and still does, help me. What more could I offer? As I introduced the film, I invited the audience to put themselves into the film, the characters, the poetry, the music as a prayer to the Mother of God to better understand what can help us in this difficult moment.

What happened after was nothing less than a miracle. The film ended to a thunderous applause, I was brought on stage with our host and an Executive Producer of the film. Everyone in the audience, and I mean everyone, was in tears- including the three of us on stage. The miracle wasn’t the tears, but the judgement from the people of Jerusalem who told me that we described perfectly their drama and pointed us toward the answer. Others asked “How is it possible to write something like this, which speaks to my experience today?”. This question moved me, because it is only because of our writer’s interest to find an answer to his questions could the film transcend gender, age and cultures and become something truly helpful to the world. I have worked for companies in the past whose goal was to change culture and the world, but as I discovered that I couldn’t change myself, it seemed impossible to “change the world.” After this screening, I found the greatest contribution I can give to the world is deeply living the questions and circumstances I have been given.