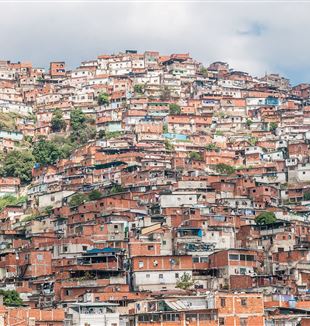 Venezuela’s crisis affects all of us in one way or another, both economically, with the great shortage of oil and the high rates of inflation and devaluation, and socially, with almost 25,000 violent deaths in 2014 alone. There is increasing hopelessness among the population, accompanied by campaigns of politicized propaganda, rhetoric, and the sound of sirens. In moments like these, there is nothing more incisive than an experience, being able to listen to people who communicate certainty and can give the reasons for the meaning of their life and for their hope.

Meeting Germán García Velutini, one’s first impression is not that of a man who has had a career in finance in one of the most successful banks in Venezuela. Instead, one is flooded by the peace of his gaze and by his smile which is full of hope. This can seem contradictory, given the tragedies in his life. He had a beautiful family with three children, but fifteen years ago his wife died. Then in 2009 he was kidnapped for eleven months. However, unlike many Venezuelans in this crisis, what prevails in Velutini is not complaint, but gratitude to God for what he has been given to live.

“For almost a year, I was isolated from my family and friends. I never spoke with anyone: total silence. I never saw a human face. Only on very few occasions, some hooded people entered the three foot by six foot cell where they kept me prisoner. It was a totally closed space, with no natural light, only a ventilator and an air duct. The food and sanitary conditions were truly difficult. But the hardest and most humiliating thing was to feel like merchandise in a context of violence that made no distinctions between political position or social class.”

The Bible and Pieces of Paper
This is how Velutini described, in only a few words, his eleven months of silence. Only the change in the overhead light bulb marked the difference between day and night. He could not exchange a word with anyone, because his prisoners communicated only through little pieces of paper. “In a kidnapping, the control is continual: the victim completely loses control of his actions, and the family is at the mercy of the whims of the kidnappers, who can do whatever they want.” In the midst of all the uncertainty about what would happen, God manifested Himself in a concrete way.

After many requests, the kidnappers finally allowed Velutini a Bible, which then accompanied him in his journey of interior ascesis. Starting from that moment, the word of God became the key for discovering the meaning of the circumstances through which he was living. “Once again I give thanks to God, who through my kidnappers brought me to reflect on His Word, which is easy to read and understand. I am also grateful to the kidnappers. At that time, I never could have imagined how wonderful those months would be, listening to Our Lord.”

In such an extreme situation–but also in what each of us lives when things do not go as we wish–the need to discover the meaning of life emerges. In the words of Viktor Frankl, “There is nothing in the world, I venture to say, that would so effectively help one to survive even the worst conditions as the knowledge that there is a meaning in one’s life.” “Our Father knows what we need! And most of the time it turns out not to be what we think we need,” Velutini writes in his book about the kidnapping (Dios en mi secuestro). He continues: “We believe we need many things, but reflecting carefully, on those occasions of the fullest relationship with our Father God and our most beloved Mother, we understand that what we considered fundamental for our life is not so. Is this perhaps why we were not granted what we had requested? What do I truly need?”

Thus, in the immense solitude of prison, the fruit of a grace was born. “I found myself filled to the brim by a certainty: my solitary life, unable to exchange a word with even one other human being, had a meaning. The question to ask myself wasn’t ‘Why me? Why is my family suffering?’ Rather, the question was: ‘What is the purpose for which this is happening to me? What is the purpose for which my family is suffering?’ Then I discovered that the ‘purpose’ of life is to ‘serve’ our neighbor, and know that our prayers reach everyone.”

As the days went by, an “epistolary” dialogue began with his jailers: together with his meditation on the Bible, Velutini began to communicate his own experience to them. “They always took the pieces of paper. And I thought that they too were receiving something good, that their way of looking at life would be able to change. Even today I still think the same. I am certain that something reached my jailers, who, seeing the example of dignity that I sought to show them through my attitude and these writings, felt that something in them was changing.”

Velutini had been educated to Christianity from the time he was a little boy, but he confesses that this is not enough for truly explaining his experience. “Hope and faith served me, but I don’t know how I had them. They were given to me. They were a gift.” He is sure that even though faith, hope, and love are a gift of God, we have to live them personally, cultivate them, and give them a meaning. “In December they returned to giving me the Bible, and they also gave me an image of Saint Michael the Archangel. After three months of the hard-line regime, this fact convinced me that the kidnappers were children of God and that it was not my place to judge them.”

When he was freed, the kidnappers wrote a longer message: “No revenge or persecution.” So he asked them for the Bible and had them read Matthew 5:45: “But I say to you, love your enemies, and pray for those who persecute you.” After reading it, one of the kidnappers put his hand on Velutini’s back and embraced him. Today Velutini says he has forgiven them, does not hold a grudge against them, and has not set out to hunt them down, even though, very humanly speaking, he says he does not know what he would feel should he someday find himself face to face with them. He recognizes that these people are not human refuse, that they have a heart and feelings, the harm they did to him and his family notwithstanding. This is the attitude of a man who wants to continue on his journey, a person who is not defined by hatred and ill will, but by love. Forgiveness is the starting point for reaching true justice, instead of increasing violence and the “eye for an eye” mentality that leaves us blind. One thinks above all of political prisoners and students who are deprived of their freedom in this country. How will they emerge? What adults will they meet to help them begin their life again? This challenge faces all of us as a society: we must seek justice that is born of forgiveness and mercy, as John Paul II said in his message for the World Day of peace after the September 11th terrorist attack: “There is no peace without justice, no justice without forgiveness.” A short time after his liberation, Velutini’s friend proposed that he set up a foundation to help the families and victims of kidnapping. Velutini thought carefully about it and then decided against it for several reasons, the most important being his belief that the true possibility for avoiding cases like his comes through educating the country’s children and youth, and this is already being done by Fe y Alegría [an NGO founded and led by the Jesuits–Ed.]. There is no reason to create something new if one can rely on an already-existing effort. Then he adds: “What is the use of my having fifteen minutes of glory, and being a person in the spotlight, when what is needed here is for everyone to do their work and shoulder their responsibility seriously?”

Returning to Work
Only two weeks after his liberation, Velutini returned to work in his office and continued living in Venezuela, doing his duty, and testifying to what he experienced. “In response to this avalanche that is falling on us, we Venezuelans think we are unable to resist it, much less overcome it and we share a common false consolation that there will be someone to help us overcome this problem: a family member, a friend, some stranger, a foreign country, a national organization, or in many cases, the political leader of the moment. Instead, what we have to understand is that by shouldering our own responsibility and working together we can resolve the problems and enable our family, community, city and country to make progress. In the world, in a country like Venezuela, and especially in a city like Caracas that suffers terrible violence, we do not look down on anyone. We know that Our Lord protects us from ‘evil,’ and guarantees that He is always in our hearts. We accept ‘the destiny that one does not choose,’ and are not afraid in the streets and in life’s worries. We dedicate our lives to loving and serving.” We have encountered a man of faith who invites us to make love our criterion for living every relationship. In a country where many people walk with their head hung low, his experience demonstrates that the hope of a man, and thus of a whole nation, cannot be kidnapped.