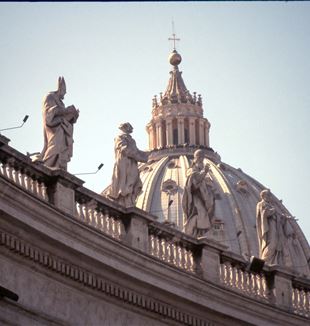 It was a once-in-a-lifetime anomaly. A quirk in the calendar that offered two very different events in the space of a month, yet both were and are destined to take up much space in the newspapers and on TV. One is already quite literally history: it will be remembered as “the day of the four Popes,” that April 27th when Francis, in the presence of Pope Emeritus Benedict XVI, canonized two of their predecessors: John XXIII and John Paul II. The other date is still to come; it won’t be of the same historical magnitude as the first, but it will still have an impact on the future of a half billion people: on May 25th the European elections will take place.

At first thought, there would appear to be little if anything to tie these two together. At first. Yet, if you read the main article in this edition of Traces–the CL document that asks the question whether it is still possible to make a “a fresh start” in Europe–a link emerges, indeed.

There’s a tiredness that abounds and a skepticism so widespread that only mentioning the word “Europe” evokes negative feeling. In many cases, there is a clear opposition; in many others, a sense of abstractness. Or, again, the perception that an ideal has twisted itself into something very different from what it promised to be: in place of a space for freedom, we have a complex of bureaucratic institutions and busybodies which have swapped the means (economy) for the aim (the common good) and struggle to deal with a crisis that has been going on for five years. This is because they have lost those few, great things that brought them into being: the value of the person, work, freedom… and those “great deep convictions created by Christianity,” as Benedict XVI called them, that lie at its very heart. When they are torn away from their origin they lose their value. They are lacking, like a house without its foundation. What can respond to this need? From where exactly can “a fresh start” begin?

It’s at this point that what we saw in St. Peter’s Square comes strongly into play. Yet it’s not a strength based on numbers, the crowd, the eight hundred thousand people who had come from all around the world or the hundreds and thousands of people who followed the ceremony that was broadcast around the world. It’s not fed by an alleged “power of the Vatican.” It lies simply in the life of those two “men of courage” who “bore witness before the Church and the world to God’s goodness and mercy,” as Francis said. These are men in whom dwelt “a living hope” and “an indescribable and glorious joy”–a full, joyful, human life, capable even of changing history (as both of them did), but by virtue of that fullness that comes from faith, not from a project.

It’s not about juxtaposing those who believe, and those who don’t, of dividing the Church from the world. Rather: among the many shared traits of the two “Holy Popes” (and the other two present in the square) is the ability to speak to everyone and to meet with anyone who seeks the truth. It’s precisely because of this that their lives challenge everyone. Did they have an influence in their own time or not? Did they contribute in responding to the challenges that reality placed in front of them and their fellow men? And what questions are posed to us–to each one of us–by their testimony?

“In a society like this, we cannot create something new except by living life: no structure or organization or initiative can succeed,” as Father Giussani said years ago, “only a new and different way of living can turn around structures, initiatives, relationships–in a word, everything. And life belongs to me; it is irreducibly mine.” It’s a duty that touches everyone, wherever he or she may be. Whether that person be the pope, be in a classroom, in the kitchen at home… because it is only there, in the life that is born from a new source, that skepticism can be won over. And everything can begin, afresh.