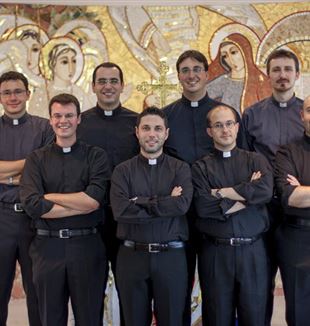 Stefano Lavelli has offered many toasts to Joseph Roth, whose short story, The Holy Drinker, “I re-read often.” Now that little green book is worn from use. “I am moved thinking that God became man and came to meet us on the way.” In the story, Andreas, an alcoholic tramp, meets a quiet man who catalyzes his life when he gives him 200 francs with only the condition that when he is able, he donate it to the Chapel of Saint Thérèse. From that moment, Andreas “is” the encounter he had. The same thing happened to Stefano. For this reason, he uncorks a bottle of wine to toast Roth, even though now Stefano lives in Naples, in the new house of the Fraternity of Saint Charles Borromeo, far from the good wine made in the hills around Piacenza, where he grew up.

“What can it do in there?” On June 22nd, Stefano will be ordained, together with seven other seminarians. He will never forget one afternoon when he was a boy, and he entered the kitchen and came upon his grandmother as she was putting a crucifix away in the cupboard drawer. “What are you doing, Grandma? After all, what can it do in there?” He asked his Grandma Laura this question without the least intention of criticism. In the most used room of the house there was life, but that crucifix was just a decoration left in the cupboard. “I grew up with the idea of faith as something far away and superfluous. My parents transmitted to me the enjoyment of work, of good things, a capacity for goodness that was faithful and freely given.” An only son, he saw his father Renato, a metalworker, labor hard to build their house with his own hands. They had a garden and a wood burning oven, and hosted dinners with friends with the food they grew. When it came time for Stefano to choose a high school, the Institute for the Hotel Industry came naturally, as he was not exactly a studious young man. “I hated studying. But the Lord makes me love things the way He wants. He made me study until I was 34 years old!” Last year, he finished the two years of philosophy and three of theology required for his seminary formation.

God bet everything. The change from the Hotel Industry Institute of Salsomaggiore to today was not a feat of acrobatics, but an untiring courtship made up of a series of events. The first was Margherita, his Italian teacher in his third year of high school, a time when he was thinking of dropping out. Margherita stopped him in his tracks, simply because she “taught lessons” seriously, with passion, “showing us that the authors shared our struggles, our loves.”

The friendship that began with her and the GS (Student Youth) kids passed through phases of distrust, resistance, and then enjoyment, and became “too beautiful to be true.” “I felt accepted unconditionally, and I found myself part of something that was much bigger than me. It’s amazing what the experience of the Movement can open in a young man”–literally, the world. “Interest in art, music, and literature was kindled in me. It was a response to the yearning for happiness and truth that I didn’t even know I had.” You understand in listening to the emotion in his voice as he tells his story that at that age he would not have bet very much on himself. Instead, God bet everything.

After his Confirmation, he had stopped going to church because of “a really negative judgment, made up of clichés.” When he met Margherita and the others, Jesus was nobody for him. After a year of friendship with them, he decided to go to Confession, without telling anyone. He entered the Cathedral of Piacenza, one day in his fourth year of high school. “I was agitated, and hoped only that I wouldn’t be asked how long it had been since my last Confession.” Instead, the first question was exactly that. “I thought, now he’s going to kill me. Instead, he went on to ask me, ‘What’s your name?’ ‘Stefano.’ ‘Stefano, think how much the Lord loves you, because not only did He never abandon you in these years, but He watched over you and came to seek you out, waiting for you, to embrace you again.’” Stefano repeats it all in one breath, almost 20 years later. At the end of his Confession, the priest asked him to repeat after him the Act of Contrition: O Lord My God… “For the first time I was saying ‘My God.’ He was no longer outside of me.”

After graduating from high school, instead of going to work as a cook, he enrolled in the University of Parma to study Preservation of the Cultural Patrimony. “The beauty of a life of communion became daily experience, as it is today. I held what had happened to me in such esteem that I became willing to give everything to Him. One day, I asked a friend how you can give everything, and he told me, ‘You don’t give everything all at once. We give everything beginning with giving something, in every moment.’” In the flesh of the friendship of those years, in a life that Stefano defines as “illuminated by the treasure of the Church we were discovering,” in a silent way many of his friends decided to consecrate themselves, in different vocations. “I also desired a place where I could give myself totally. The idea of the priesthood had been one of the furthest from my mind but, for that matter, so was the idea of becoming Christian.”

There was the “indicator light” of that priest in the Cathedral confessional. And there would be many others, among them John Paul’s words in Tor Vergata (at the close of the World Youth Day on August 20, 2000), to a million young people–though Stefano felt the words were spoken directly to him. He quotes it word for word: “If any of you, dear young men and women, hear the Lord’s inner call to give yourselves completely to Him in order to love Him ‘with an undivided heart’ (cf. 1 Cor 7:34), do not be held back by doubts or fears. Say ‘yes’ with courage and without reserve, trusting Him who is faithful to His promises. Did He not assure those who had left everything for His sake that they would have a hundredfold in this life and eternal life hereafter?” Stefano would be touched by very intense friendships and by the beauty of his love for his girlfriend, Lucia, who left him to enter the Trappist Vitorchiano convent. “For me, either my desire was mistaken, or reality was mistaken. Instead, there was a third possibility: God was asking something else of us.” And Stefano gave Him everything, “passing through years of toils, discoveries, corrections, and other signs,” such as the clear sensation he felt after spending time with some friends at the Saint Charles Borromeo seminary. “It was a beauty that wounded me.” Then, in June of 2006, he had another such indicator when his dear friend Fr. Matteo asked him, point blank, on the curve that led to the Via Boccea seminary parking lot, “Would you enter here tomorrow?” “I had never been so happy as I was in telling him yes. I sang all the way home.”

When Stefano arrived at his family home, the TV was on, as always, this evening with motorcycle racing. He told them his news, and there remained only the sound of the motorcycles zooming. “It was hard for them. Seeing my father sad, I told him the truth: ‘Dad, it’s partly your fault. I’m entering the seminary because I want to live, with everyone, the love you have shown Mom.’” It was as if a big rip opened in the scene, and a new road was shown to them, too. “My father comes from a generation far from God, that of 1968. At times, I think the Lord moves ahead in time in order to return back. He seized me, in order to seize those who came before me.”

One hundred brothers. Stefano began his formation, and participated in charitable work at the Bambin Gesù Children’s Hospital and ministry with the young people of the parish in the Magliana district of Rome. “Everything heightened my vocation: bringing God closer to the people, and the people closer to God. I see that I rediscover what was given to me, in the act of giving it. I don’t empty myself, but I regain it for myself, always.” He lives in the light of “memory, recognizing that every action of ours is in the sight of God; the moments of judgment and of common life, and mission, which is everything, including how you treat those who work side by side with you.” You will have a hundred fathers, a hundred brothers, a hundred children. “The hundredfold is true, even in the details. I have a hundred brothers who are more brothers to me than if they were my flesh and blood. The paternity of the fathers I have is great. And I also have two hundred children in the school where I teach now.”

The house in Naples where he had relocated from Rome was inaugurated in October. Stefano lives together with Fr. Gianluca Attanasio and Paolo Pietrolongo. “The first thing that makes me happy is that I was not the one to choose anything: not them, not where I am, not what I do. I am sent. Sent. It means that there is someone who asks it of me, with whom there is a relationship, where my good is always foremost.” Now he is waiting for June 22nd. They told him that, when you lay prostrate on the floor while everyone is invoking the saints for you, what you ask there, God answers forever. What will you ask for? “Holiness.”