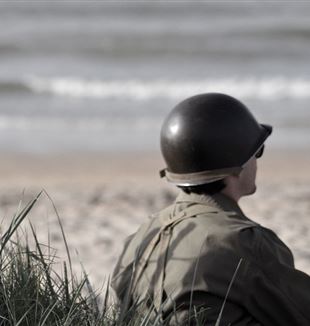 “Why am I here? I don’t know. Maybe to make up for the time lost during my battle with God. I always thought that, at a certain point, He would take everything. I know that He can. I believe it.” We’ll call him John. We met him in the kitchen at the New York Encounter (see last month’s Traces, Vol. 15, No. 2), where he was one of the 200 volunteers. He was wearing cargo pants and a baseball cap, and around his neck hung his U.S. Army dog tags. John is 27 years old and comes from a Baptist family. His father and grandfather both died at war; in 2003, he, too, walked into an enlistment center. From there, as soon as he was of age, he was sent to Iraq, then Afghanistan and Colombia. Today he serves on American territory. One evening, at the end of his shift, he sat down at a table with some new friends and agreed to tell his story–on one condition: “No names.” He began by saying, “My girlfriend brought me to the New York Encounter; we met recently, when I decided to become Catholic.”

In my arms. He tells his story dryly, without embellishment. He is a soldier; his university was the battlefields. He doesn’t use word play, and he wouldn’t know how to go about it, anyway. After a few pleasantries, he goes right to the heart of the problem. “I got to the point of cursing God. I asked Him, ‘If you are the Almighty, He who can do anything, then why do You keep treating me like this? Why do You keep letting my friends die?’” His best friend was killed in Iraq in January 2007; he died in John’s arms. “We were on a mission. I was in the first truck, he was in the third. I was listening to music with headphones when I thought I heard an explosion. I didn’t know what it was. I turned around, and I saw a flock of birds lifting off of the ground. I asked the artilleryman what had happened, and he answered, ‘It’s bad! It’s bad!’ The third truck had driven over a mine. The artilleryman had been hurled from the vehicle. The medic who was sitting in the backseat had been cut in half. The driver had been thrown through the windshield, and the engine had fallen on him. The passenger who was next to him was sinking into a canal by the side of the road.” At first, they tried to help the survivors. Then, someone started shooting at them from a house. At that moment, John could only think of how much he wanted to kill someone. He ran toward the house and threw a grenade. Entering, he saw two armed boys and opened fire.

Returning to the convoy, he found his friend close to death. He was wounded all over his body, but still breathing. “I held him in my arms. I said, ‘I’ll pray for you. I know that you don’t believe, and I don’t know what it can do for you.’ I talked to him, I told him that I would go visit his mother. At one point, I closed my eyes and I helped him to close his. When I opened them again, he coughed up blood and died. He was the 40th friend that I lost at war.”

John returned home for a period of furlough, full of agitation and suffering from post-traumatic stress disorder: insomnia, nightmares, fear of sudden noises. But what consumed him was rage–rage against men, and against God. His faith vacillated. What good is it? What does it change? Then he met Chris Kyle, the best sniper in American history. He died recently, not at war, at the hands of the Taliban, but back home, shot in the back by a fellow soldier. Of Chris, John says, “There were two things that he knew how to do well: cook spaghetti, and kill. Usually, snipers aim, miss, adjust, pull back, and shoot. He only ever needed one shot. One shot, one kill. And yet he was an Evangelical Christian, one of the most religious people that I’ve ever met.”

The pink Pumas. The question that John asked Chris was the most human one: “How can you kill someone, or see a friend die, and go on living?” The answer was simple, and John repeats it today just as he heard it then. But it is an answer that sparks a thousand other questions: “He told me that when you lose a friend, you can’t get angry and hate the enemy. Whether you believe it or not, the other soldiers on the battlefield are like you. You fight for what you believe in, and so do they. There’s no reason to hate. There’s the code of combat: I kill you before you can kill me. But there’s no reason that you should hate the people you are going to kill.” At first, those words shocked John. He closed his eyes and saw the faces of the people that he would want dead. “Only today do I begin to understand. Actually, when I think about my enemies, now I’m even proud of them.” Proud? “The Taliban go around in sandals, with guns from the 1970s. I would like to meet them some day in Heaven and, over a beer, ask them, ‘How did you do it?’ Today, I think back on all of the ugly things that I said against God. I want a chance to redeem myself and to go back to what I left behind.”

John’s audience–an impromptu group of new friends around a restaurant table–is breathless; many questions stick in their throats as they listen to the stream of consciousness that seems to torment him. “I’m tired of the press. ‘Soldier Kills This One, Marines Kill That One;’ ‘Massacre in Iraq, Massacre in Afghanistan.’ Newspapers and TV focus only on the negative. I can’t tell you how many times I’ve been on a mission whose only objective was to supervise the reconstruction of schools and hospitals for children. But people don’t care about that. People are only interested if we make a mistake.” John talks about one mission, in a village in Afghanistan. The territory was dry and rocky. He saw children with no shoes or socks, their feet bleeding by evening. He asked his mother to organize a shoe drive in her Baptist parish. The shoes arrived, and the soldiers handed them out on Easter. “At a certain point, I realized that one boy had his eye on some pink Pumas. They were girls’ shoes. I took a pair of boys’ shoes and went toward him. But as I got closer, I saw the look on his face. I thought, ‘I can’t do it. This could be the first pair of shoes he’s ever had in his life. What do I do? Go over there and tell him that they’re no good?’ That boy ran all over the village in those pink shoes, with a smile that lit up his whole face. I thought, ‘Keep them, dude.’” There were many Taliban supporters in the village, explains John. After the distribution of the shoes, they came to the soldiers to point out the terrorists to them. Around 40 were arrested. They even revealed the location of antitank mines. “They saved our lives.”

John is only 27, but for him the moment of reckoning has already arrived. He thinks about the people that he killed and those that he saved, about why he wound up doing what he does. “God gives out talents. One person is a good speaker, so maybe he’ll be a lawyer. Someone else likes cooking, and maybe he’ll become a chef. I’m good at fighting, I like guiding soldiers, being at the front... That’s why I’m a soldier. But people don’t know what it really means to be one. They talk about Navy Seals, but either they know exactly what they are, or they don’t have the slightest clue. There’s no middle ground. For some, they’re heroes; for others, they’re only bloodthirsty cowboys. They are neither of those things.”

Return to the front. In John’s platoon, they had a habit of sitting around a fire together after returning to base from missions. They did it even after the most devastating attack: an ambush that lasted four days, during which, miraculously, no one was wounded. Bullets flew from every direction, grenade launchers fired, there were two suicide attacks. It was a nightmare. Back at the base, they sat in a circle as usual. Forty-five minutes went by before anyone opened his mouth. The first one to speak said only, “Dude.” “It was the wildest clash that I’d ever seen,” says John. “It was like God protected us with an iron shield... But it doesn’t always go that way. Of my enlistment class, there are only ten of us left. No, nine. One killed himself last year.”

Another silence interrupts the flood of words. Someone takes the opportunity to ask the question that is on everyone’s mind: “Would you return to the front, John?” “Yes. If I were able to help even one person, it would be worth it. Like that boy with the pink shoes. If I could, I’m not saying kill someone, but get rid of some danger. If it were to make one person’s life better, it would be worth it.” What is the real reason that people do this? “You can ask 90 percent of soldiers, and I’m sure that they would tell you the same thing: when you’re at the front and you risk your life, you never think–not even in passing–‘I’m dying for America.’ You think about the comrade at your side. You don’t care about politics, you don’t care what people say or what they write, you don’t even care about freedom. Most of us don’t even agree with the motive for which we’re fighting. It’s an absurd war, but it’s our job. It’s not a choice.” Have you ever wanted a different life? “Absolutely not. Every now and then, I’d like to be a hula-hoop champion or a bullfighter, but I still have time...” He smiles. “Being a soldier made me what I am, and above all, it made me more grateful toward life. But I don’t have regrets; I’d go back to the same enlistment center that I walked into in 2003.”

I’m not the only one. Before coming to the New York Encounter, John went to School of Community five or six times. When asked what he thinks of it, he responds, “Last Monday, a girl was talking about her job and she said that she felt sad. It comforted me to discover that I’m not the only one who says that life is tough. I often find myself saying it. It encourages me to know that I’m not the only one who feels like a failure.” After the weekend in New York, John will go back to his CL friends–to the desire to tell his story, the need to be heard; to the desire to be with his girlfriend’s friends, to see someone else ask the same questions that he asks himself. Or to ask questions that the others can never have asked themselves. Maybe he’s found his place. He says that he will probably not return to the front. But his battle with God is ongoing. We don’t know how it will turn out–and neither does he.