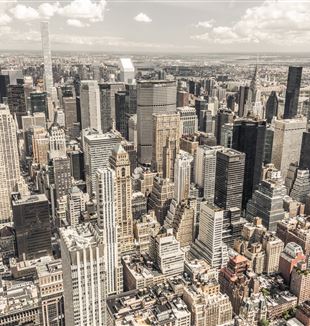 Stage right at the Manhattan Center in New York City are the black singers in black robes from the St. Charles Borromeo Gospel Choir, mostly women, robust bodied, with voices sprung from spiritual catharsis, who have come downtown from highest Harlem to bring their unique joy to this Mass at the 2011 New York Encounter. Stage left are about fifteen white celebrant priests in white vestments, embodiments of prayerful tranquility, speaking in the gestures of outstretched arm and hand, of silent blessing. At the center, on the table before Chilean Bishop Fernando Chomali, is the reason for everything present: the Mystery of the Eucharist. "Speak to my heart," the choir sings as the gifts of Body and Blood are encountered, making concrete the Bishop's reminder that we are together in this great city, one that is alive night and day, because of Christ's presence in our own smallness.

Fittingly, indifference had to be left outside from the moment the New York Encounter's doors opened on Friday, January 14th, until the last discussion concluded on Monday, January 17th. It wouldn't have fit in the Manhattan Center even if someone had tried to smuggle it in through a back entrance of the 34th Street performing arts venue. In fact, there was just room enough for the several thousand attendees, 120 volunteers, sponsors, and exhibitors who filled virtually every open spot during the four-day event.

Latecomers to panel discussions, musical events, and the presentation of the play The Tidings Brought to Mary, found themselves climbing up to the balconies where space also had to be made for the exhibits. The crowded, just-this-side-of-cramped feel of the surroundings sent energy levels through the roof. They were also a somewhat paradoxical mark of success for the organizers, who moved this year's Encounter from its previous smaller location at Times Square.

"I'm kind of proud it wasn't big enough," Chairman Riro Maniscalco chuckled in the event's aftermath. "We moved to a bigger place this year, and that wasn't big enough, so it means we're growing. Our challenge now is to go out and find some place bigger that let's us stay a step ahead." Maniscalco said a major surprise was the number of visitors who attended the entire four days of the Encounter. Organizers expected attendees to come and go between Friday and Monday. Instead, like guests made warmly welcome, they came, and they stayed. "That's an accomplishment because it gave people the chance to meet each other, to share, to get know each other," Maniscalco said. That, as much as the intellectual spark of eminent panelists or the sterling quality of the artistic performances, is key to the Encounter: to create a public space where the reality of Christ is present right in the heart of New York City. The all-black Gospel choir came down from Harlem to swell that downtown heart. And saxophonist "Blue Lou" Marini came along to treat us to a Sunday night multi-media "ride through the streets of New York," featuring musicians whose usual audiences are the crowds moving through the city's subway system. But it was there in more serious forms as well, such as a sobering discussion held Saturday afternoon on the need to build a more human economy. The underlying theme of the discussion was the fragility of the current painfully slow economic recovery and our capacity to better the very system that has battered so many lives in New York and around the world. "We don't see Central Park covered with shanty towns as we did in the 1930s…but there is a risk for the U.S. of a different kind of reckoning," said moderator Anujeet Sareen, a global fixed-income portfolio manager. "We have spent more for recovery than ever in our history, and we have the least to show for it. There are still seven million [Americans] without jobs."

Far Beyond Economic Matters
While the panelists could hardly be expected to solve America's or the world's economic problems in 90-minutes flat, as a group they articulated the compelling point that the recessionary debacle of 2008 had its roots in failures of leadership, yes, but much more so in the forgetting of the reality of being human.

And, as Fr. Julián Carrón, President of the Fraternity of Communion and Liberation, argued in a subsequent discussion, re-awakening the reality of the human is vital far beyond mere economic matters. It is central to the Christian encounter itself.

"If the Christian faith is not able to re-awaken the 'I,' is it even reasonable to be a Christian?" Fr. Carrón asked pointedly during the panel entitled, "Reality, Reason, Freedom: At the Root of the Religious Quest."

Following the "method of beauty" set out by Fr. Luigi Giussani in The Religious Sense, Fr. Carrón called on us to answer that question through the same perceptual encounter John experienced when he saw Jesus as the Lamb of God–or when Christ Himself challenged the proto-disciples to "come and see" where He lived. To re-awaken the "I" of our authentic humanity, Fr. Carrón said, is to encounter the world with our "eyes wide open–like children." What we see may be the great dramatic beauty of The Tidings Brought to Mary, it may be the daily beauty of street life in a busy city, or it may be the terrible beauty of death imminent. Still, it is imperative that, like children, we must be willing to look.
On Saturday evening, for example, a panel of Canadian health care professionals eloquently made the case that society's refusal to "come and see" the reality of life from beginning to end is driving advocacy of euthanasia as a valid end-of-life medical option.

They detailed, for a standing-room-only crowd, their political efforts in the Canadian province of Quebec to thwart government ambitions to smuggle euthanasia into the public health care system.

Yet it was a young Quebec medical student, Laurence Normand-Rivest, who moved the crowd with her account of watching her grandmother die from brain cancer.

"Each day, as she was dying, she was getting more and more beautiful," Rivest said. "It was very mysterious. This is what I want to be faithful to. We make ourselves blind if we believe euthanasia is the solution."

Her words were luminously evocative of a quotation from the late Dr. Jérôme Lejeune, the founder of cytogentics and discoverer of the gene responsible for Down Syndrome.

Dr. Lejeune's contribution to science was honored at the Encounter with a presentation by his daughter, Clara Gaymard, and by an exhibit detailing his life. A poster in the exhibit quoted him: "The absolute superiority, the complete novelty of humanity is that no other creature can experience a kind of complicity between the laws of nature and its awareness of its own existence. The ability to admire exists only in human beings."

Admiration, of course, can only follow encounter. We cannot truly admire what we have not truly experienced as reality. The black and white tableau, the chiaroscuro, of existence is such that it can only be made whole through constant gazing on the Mystery at its center, that is, as Fr. Carrón said, by looking through the wide-open eyes of a child.

Leopardi's Provocation Such was the conclusion to be drawn from the marvelous last act of the 2011 New York Encounter, a Monday morning discussion on the poetry of that most un-childlike of poets, Giacomo Leopardi.
There was friendly disagreement between two of panelists not about Leopardi's merits as a poet but about the fullness of his vision of humanity. Jonathan Galassi, President of the publishing house Farrar, Straus and Giroux who has just translated Leopardi's poetry into English, ventured that the works reveal a desire for "something beyond the present" that is steeped in "regret, a sense of something missing as the obverse of Christianity."

However, Joseph Weiler, the amiable contrarian who is Director of the Straus Institute for the Advanced Study of Law and Justice as well as the Tikvah Center for Law and Jewish Civilization, countered that Leopardi is a poet so without mercy that he is incapable of regret. "In Leopardi, I find no pardon, no pity to existing humanity," Weiler argued. "He is a man with no pity, no forgiveness, no pardon for the present. The future is always promising, the past is always beautiful, but the present is always sad, melancholic, depressing."

It fell to poet Davide Rondoni to bring relief to the realities. It is true, Rondoni said, that Leopardi's pessimism springs from a view of the present being "devoured" by life. At the same time, his pessimism is so conditionally expressed as to be more of a question, even a provocation. To admire him may be to accept the contradiction of human pessimism as a possibility of enquiry rather than as a definitive judgment. "Man is a naturally contradictory being," Rondoni said. "He cannot be solved by himself." From Harlem to downtown Manhattan, and out into the great, wide-world beyond, words that capture the heart of a New York Encounter.