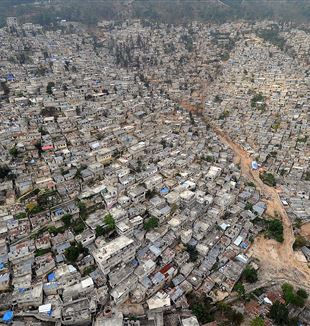 Just off the flight from Port au Prince to Milan, with a stopover in Orly, Chiara Mezzalira, a 63-year-old pediatrician who has just returned from six weeks of intense work in Haiti, has barely enough time to unpack her suitcase in the Memores Domini house where she lives, and have a real Italian espresso, before everyone asks her about her experience.

Chiara, who is retired, having spent 20 years caring for children in Lagos, Nigeria, had offered her assistance to AVSI after the terrible January 12th earthquake.The NGO, which has been working in Haiti for years, “drafted” her into working in the tent city set up by Fiammetta Cappellini.

An Infinite Need
While she speaks, her eyes light on the 2010 CL Easter poster [on this issue’s cover] on the wall. Chagall’s painting of the father embracing his son provides a starting point for her words. “‘God was moved by our nothingness.’ This is what I experienced in Haiti,” she says decisively. “Charity is the way I saw Christ reaching us with His tenderness. In those terribly difficult conditions, you saw the difference in those who acted because they first of all acknowledged in their own lives, in their own nothingness, this infinite, deeply moved emotion of God.” Going from tent to tent, entering the shantytown of Cité Soleil (the district where AVSI set up assistance), and recognizing the infinite need of the people made her feel powerless. “In that disaster, everything becomes an emergency and you realize you could go nonstop, you could examine children from morning to evening and from evening to morning, but the next day you’d still have an endless line outside the clinic. That need is inextinguishable and unmasks our presumption that we can save the world.”

This must have frustrated many of the doctors and volunteers who rushed to Haiti, this “illusion of self-sufficiency,” to use the words of Pope Benedict XVI printed on the poster. “Without the certainty that Christ is the answer to need, we become ‘Rambo’s’ in a battle against time, circumstances, and ultimately against our own limitations.”

Instead, being deeply moved is something different, something that gives a new freedom to “doing,” “healing,” and “repairing.” You understand that this authentic gaze upon yourself and others is possible as you hear about the myriad facts in Chiara’s story–for example, when she tried to deal with the many children buzzing around her clinic. “The strategies for malnutrition stipulate distribution of high-energy cookies and a multivitamin nut spread to children under five and to pregnant or nursing women. Every day, there were six, seven, or eight year olds coming with some excuse for a medical checkup because they wanted the cookies. They were hungry, even though they didn’t meet the protocol! So then, since I couldn’t give them the entire packet, I opened them and distributed the cookies separately. There was no sense in sticking rigidly to a protocol; the reality of their need demanded my response.”

A Child’s Crying
Another example was when, during a “port-à-port” in a partly destroyed shantytown, she heard and followed a child’s crying. At the end of a dark corridor she found a newborn, abandoned on the floor, whimpering, and a girl of a year and a half, sobbing desperately. “Her mother was wandering around,” recounts Chiara. I had some water brought and washed them, put on diapers and held them close in my arms. While I kissed them and they caressed me, I thought, “What will become of them?” It wasn’t a sentimental question. It was the trusting abandonment to an Other. “Life belongs to an Other,” Chiara remembers the CL flyer published hours after the earthquake. “This is the truth that made me love everything I saw in Haiti. Unless you acknowledge that they belong to God, you can’t deal with the crowds of children who run after your car when you arrive in the camp, who touch you, push close to you, because more than medicine or food, they need your friendship.” To begin to live again, deep down, nothing else is needed.

The First Experience of Goodness
This certainty enables you to look at the earthquake without being utterly overwhelmed. “I realized this when I met a Haitian priest who told me, “We took 200 years to build up our land, and it took just 35 seconds for everything to collapse.” I told him that it wasn’t true, that not everything had collapsed. “The houses came down, but you’re still here! If you only belong to yourself, then your ‘I’ remains buried under the houses.”

The women sitting in a circle breastfeeding their little ones outside the clinic are a sign of that rebirth. “I discovered that, in Haiti, women nurse very little and poorly,” recounts Chiara. “When I asked the mothers to show me how they did it, I understood just by the way they held the babies that it wasn’t a familiar gesture for them. So I began taking them in groups and explaining how to nurse. I’ll never forget the surprise on their faces when I said that nursing also means enabling the baby to have its first experience of goodness, of happiness.”

This word must have been so absolutely novel in those circumstances that it also created interest in some volunteers. The next morning, Chiara was amazed to find Claudinette, the nurse, repeating the same words to a group of women in their ninth month of pregnancy. “My involvement with those mothers didn’t depend on my own goodness,” says Chiara, looking at the poster. “It is the child of that embrace that I bear within, of that infinite, moved emotion of God for my nothingness.”