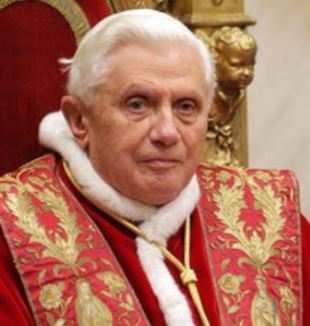 The Theme of the Synod for Africa, “Reconciliation, justice, and peace,” was “not an easy challenge,” according to Pope Benedict XVI, speaking extemporaneously on October 24th at the end of lunch with the Synod Fathers. The Pope explained that the theme “certainly implies a strong political dimension, even if it is obvious that reconciliation, justice, and peace are not possible without a deep purification of the heart, without renewal of thought, a metanoia; without that newness which must come precisely from the encounter with God. But even if this spiritual dimension is profound and fundamental, the political dimension also is very real, because without political achievements, these changes of the Spirit usually are not realized.” So there were two temptations, he went on, which are “to politicize the theme, to talk less about pastors and more about politicians, thus with a competence that is not ours,” and also that of “pull[ing] oneself into a purely spiritual world, into an abstract and beautiful world, but not a realistic one. A pastor’s language, instead, must be realistic, it must touch upon reality, but within the perspective of God and His Word.” He concluded, “It seems to me that, thanks to God, we managed to resolve it” (the problem).

The lunch and the appointment. It is not easy to summarize the journey that, in 20 days, led the Synodal Assembly, composed of 244 Fathers, to discuss and sum up the needs, the emergencies, and the possible solutions to the evils that beset the African Continent. The proposed theme, “The Church in Africa at the service of reconciliation, justice and peace,” had its formal crowning, announced by the Pontiff to the African bishops gathered at the table with him: the appointment of the General Relator of the Synod, the Ghanaian Cardinal Peter Kodwo Appipah Turkson, as successor to Cardinal Renato Raffaele Martino as head of the Pontifical Council for Justice and Peace.

The Synod expressed the awareness that little is spoken about Africa except its bad news and, of course, there is no lack of it but (as emerged in the debates) there are many positive experiences of re-birth. Despite this, it cannot be hidden that “in all this, Africa is the most hit. Rich in human and natural resources, many of our people are still left to wallow in poverty and misery, wars and conflicts, crisis and chaos. These are very rarely caused by natural disasters. They are largely due to human decisions and activities by people who have no regard for the common good.”

The gift of pardon. The focal point of many interventions was the need for reconciliation, an initiative that “comes from God,” because, as St. Paul teaches, “in Christ, God has reconciled the world to Himself.” The Fathers affirm, “This is done by His gratuitous gift of pardon without condition.” The bishops appeal to all “to be reconciled to God. It is this that opens the way to genuine reconciliation among persons. It is this that can break the vicious circle of offence, revenge, and counter-attack. In all this, the virtue of pardon is crucial, even before any admission of guilt. Those who say that pardon does not work should try revenge and see. True pardon promotes the justice of repentance and reparation, leading to a peace that goes to the roots of conflict.”

These words were taken up by Benedict XVI in his homily in the concluding Mass of the Synod, celebrated at St. Peter’s on Sunday, October 25th: “Get up, Church in Africa, Family of God, because you are being called by the Heavenly Father whom your ancestors invoked as Creator, before knowing His merciful closeness, revealed in His only-begotten Son, Jesus Christ. Set out on the path of a new evangelization with the courage that comes from the Holy Spirit. The urgent action of evangelization which has been spoken about so much in these days also involves an urgent appeal for reconciliation, an indispensable condition for instilling in Africa justice among men and building a fair and lasting peace that respects each individual and people; a peace that requires and is open to the contribution of all people of good will irrespective of their religious, ethnic, linguistic, cultural, and social backgrounds.”

Poisonous Viruses
The evangelization of Africa, the bishops explained, cannot stop short at the announcement of the truths of faith. There is urgent need to accompany the journey with on-going formation. The final message of the Synod also says, “We need to put in place an on-going formation program for all our faithful, especially those in high positions of authority…. Africa needs saints in high political office: saintly politicians who will clean the continent of corruption, work for the good of the people, and know how to galvanize other men and women of good will from outside the Church to join hands against the common evils that beset our nations.” For “many Catholics in high office have fallen woefully short in their performance in office.”

A theme on which Benedict XVI particularly insisted is that of the family, attacked by the “viruses” that come from outside the continent. “We alert you to be on your guard against some virulent ideological poisons from abroad, claiming to be ‘modern’ culture. You should continue to welcome children as gift from God, and train them in the knowledge and fear of God, to be people of reconciliation, justice, and peace in future.”

Islam and dialogue. As to the issue of the fight against AIDS and the means for this, to which the media are so sensitive, the bishops want to recall, “The Church is second to none in the fight against HIV/AIDS and the care of people infected and affected by it in Africa. This Synod, with the Holy Father, Pope Benedict XVI, seriously warns that the problem cannot be overcome by the distribution of prophylactics. We appeal to all who are genuinely interested in arresting the sexual transmission of HIV/AIDS to recognize the success already obtained by programs that propose abstinence among those not yet married, and fidelity among the married.”

Finally, after recalling the “shameful” situation in which some countries find themselves, amid widespread disinterest (like the “sad situation in Somalia, engulfed in a virulent conflict for almost two decades, which is already affecting neighboring countries. We do not forget the tragic plight of millions of people in the Great Lakes Region, and the still lingering crisis in Northern Uganda, South Sudan, Darfur, Guinea Conakry, and other places.”), the bishops dealt with the issue of the relationship with Islam, one of the most recurrent in the interventions, tackled with different approaches according to the various situations lived in the dioceses. “Religious fanaticism is spreading all over the world. It is causing havoc in many parts of Africa. From our traditional religious culture, Africans have imbibed a deep sense of God, the Creator. They have brought this into their conversion to Christianity and Islam. When this religious fervor is misdirected by fanatics or manipulated by politicians, conflicts are provoked that tend to engulf everyone.” But “the Synod heard the testimony of many Synod Fathers who have successfully walked the road of dialogue with Muslims. They have given witness to the fact that dialogue works and collaboration is possible and often effective. The issues of reconciliation, justice, and peace generally are concerns for entire communities, irrespective of creed. Working on the many shared values between the two faiths, Christians and Muslims can contribute greatly toward restoring peace and reconciliation in our nations. This has already happened in many cases.”