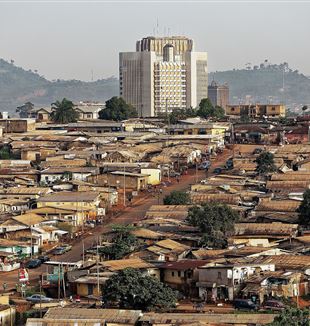 The President’s praetorian guard brandish their machine guns in the faces of the people who want to see the Pope and take part in the Mass that will begin at 10:00 am. It is 8:00 am on Thursday, March 19th, the Feast of St. Joseph. Benedict XVI wants to spend the feast day of his patron saint in Cameroon. The people have been lining up since 4:00 am to get into the stadium in the capital, Yaoundé. A multicolored crowd accompanied the Holy Father as well as it could, greeting him along the way from the airport to the city center–18 miles of people lining the roadside. Even in the city, they were always kept a good distance away.

There are too many soldiers. Today, though, in the stadium, there are the lucky ones who have been able to get one of the 50,000 tickets–few, to tell the truth, compared with all those who wanted them. Even these have to endure the Presidential Guard protecting Paul Biya and his family. They wait to be allowed in, with that patience that is typically African: patient but determined.

We Communion and Liberation members are here, too, with the tickets we barely managed to get. There are 25 of us, out of the over 60 of the Yaoundé community who wanted to come. Even our friends of the English-speaking community in Kumbo had to give up on the idea. They are represented by Fr. Giuseppe Panzeri, a Capuchin priest from Lecco. The others stayed home to watch the Mass on TV.

We each have a white t-shirt bearing a letter, together spelling “Communion and Liberation.” We didn’t bring a banner for fear they would take it from us.

Casimir’s tears. Our community has existed since 1992–a seed, as Benedict XVI described the encounter with Christ, speaking to the youth of Angola–small, but fruitful, totally entrusted to our freedom. “To all the young people present, I offer words of friendship and encouragement: as you face the challenges of life, take courage! Your life is priceless in the eyes of God!”  That life has an infinite value in the sight of God can be easily seen in our Social Center, born at the beginning of the year 2000 of the experience of sharing that Fr. Maurizio Bezzi had been living with some street children, helped by the friends of the community who were living this experience of charitable work. The youth who come to the Center can witness it.

A dozen friends of the Movement, some of them Protestants and Muslims, see all these youngsters marked by suffering arriving at the Center. In a country that counts more than 230 ethnic groups, where life together is not always easy, unity is apparently impossible, yet it exists. The kids who come to the Center never ask the educators, “Why are you doing this?” in the singular, but in the plural (they speak French), unwittingly affirming a unity brought by Christ.

Every day, the Center welcomes between 150 and 200 young people who live and sleep on the street, like Casimir, a young orphan who is very intelligent. He is trying to restore a relationship with his uncles and aunts, all that is left of his family. He has gone back to school, but his family has thrown him out again. So he came back to the Center; he goes to school and also works as a porter, carrying sacks in the market. Here at the Center, there is someone who looks at him, and takes him seriously, and tells him, “Don’t cry.”  “Your life is priceless in the eyes of God! Let Christ take hold of you, agree to pledge your love to him… To the children who no longer have a father, or who live abandoned in the poverty of the streets, I would like to say: God loves you, he has not forgotten you, and Saint Joseph protects you! Invoke him with confidence.”

An imaginative mixture. “The Church is truly God’s family, gathered in brotherly love; this leaves no room for ethnocentrism or factionalism, and it contributes towards reconciliation and cooperation among ethnic groups for the good of all,” the Pope said to the bishops of Cameroon.

Ours is the community of the capital. Here all the tribal groups are present . The Movement in Yaoundé is a mixture of different ethnic groups. Certainly there are differences, because this is God’s imagination working; He doesn’t allow the deadly boredom there would be if we were all identical. The differences within the community, instead of being obstacles, take on a value and become a wealth because Christ is present. Together, the people in the community have broken down barriers and prejudices that seemed insurmountable–like that time they went along with Marta, a girl of the Bassa’a tribe who could not have gone to her father’s funeral for fear of being killed (these things actually happen here). After 10 years, she went back to her village to find out where her father had been buried. How she was reproved by her mother! Why go to the village to collect curses and insults? Moreover, she is a girl who is not married, has no children, and follows these friends of hers who are not of the same tribe…What a scandal!  There is also Tontine’s experience: “We meet once a month. Everyone puts an agreed amount in the common fund and, in turns, one of us takes it all. In this way, someone can have a substantial sum to make use of, which can be paid back little by little, and without fear that by keeping a large amount in the house, it may be stolen. It is a way of saving money, born among the people who live our experience, with a mutual assistance fund that is used in moments of celebration–a birth or a marriage.

Mireille tells us, “The education we receive in the Movement helps us not to fall into tribalistic temptations. This becomes concrete in our supporting each other as one person in moments of joy or pain.” This way of conceiving themselves was born of the Union of Friends Without Borders (RASAF  in the French acronym). It groups together adults of the CL community and people who follow our charism, our way of living. “Our aim is that the CL experience help us to change our life, concretely, in all its aspects.”

As Paul VI said, speaking of the Church, “we are an ethnic entity sui generis!”

If life changes. “Sons and daughters of Africa, don’t be afraid to believe, to hope and to love; don’t be afraid to say that Jesus is the Way, the Truth and the Life, that we can be saved only by him.” Here, too, the ambit, the common mentality in which the community lives, is against Christ. How much impenetrability, how much gossip, how little mutual trust! But if we look at the years spent here, we see that a journey has been made. That seed planted by Giussani in the Berchet High School is bearing fruit, even here, in the land of Africa.

Marthe tells us, “We considered certain aspects of our life to be private (having a child, getting a  good job, so as to earn a lot of money). We didn’t have the courage to judge these things from the point of view of our belonging to the Movement. This made us understand that we were slaves of the common mentality, but this is  no longer the case. The miracle is the companionship that supports us in this daily challenge.”

Some people, two men and two women, have joined the St. Joseph Fraternity. This is because of an exceptional human presence, in which they have discovered that Christ is enough for them to live. “St. Joseph accepted the mystery that was in Mary and the mystery that was Mary herself. He loved her with that great respect that is the seal of an authentic love. St. Joseph teaches us that we can love without possessing.” Without possessing, yet having everything… Without the fear of going against traditions, the skepticism of friends, or the insults of family members–hence, an absolute novelty.

The fruits of the work. The Pope’s visit was an opportunity to look at our companionship, to spot the facts that witness to what we are becoming, within our society, thanks to the work of the School of Community. A weekly work, every Thursday after Mass, it is a moment that is becoming less a discussion and more and more a witness of a movement in action.

On the fruits of this work, Pascal says, “Two things strike those who meet us: the way we live our work and the way we live our family life, which are the two typical moments in which we express our concept of life. I teach in a high school in Yaoundé. I had a very close working relationship with the head of the school; he trusted me and gave me important jobs to do. Then the head changed, and my colleagues immediately tried to discredit me so as to get my job. In time, though, the new head was forced to acknowledge that he could trust me. I didn’t try to show myself off so as to make progress in my career, but rather I worked out of passion for my own life and that of the children. If I had no passion for my own life, I would not have it for them. I learn this on Thursdays at the School of Community.”

Hélène, his wife, also has a story to tell. She and Pascal married in the Church when still young. A priest had told her, “You’re still young; wait to get married, you never know…” Today, Hélène recalls, “In the quarter where we have been living for two years, one of our neighbors, seeing us with our four children, said, “When I see you, I think of the Holy Family.” But we don’t do anything extraordinary; we just live what we have encountered, what we learn in the School of Community.

“The seed of his presence was buried deep within the hearts of this dear continent, and it has blossomed gradually, beyond and within the vicissitudes of its human history.” Take the Pope’s word for it.