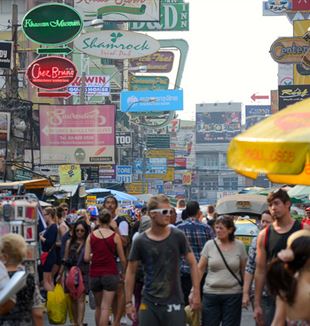 You can’t imagine the stunning power of thousands of atom bombs, transmitted to the ocean waves, pushing them at hundreds of miles an hour and raising them 10-15 yards high! It means that the water had the force to sweep away everything in its path and dump it over 2 miles from the beach. This is how Sister Angela Bertelli from Carpi, Italy, a Saverian congregation member and missionary in Thailand for 3 years now, tried to describe what happened and what she sees before her eyes. But the hearts of the people she visits daily in the little refugee camps set up by the Thai army are even more ravaged than the villages swept away by the tsunami last December 26th. For example, Giampen, a 26-year-old mother, lost both her children. She and her husband survived because that morning they had left home for a moment. They were far enough away to be saved, but too close not to see their home and children swept away by the sea. She is inconsolable. Sister Angela tries to support her, listen to her, let her express herself, as best she can, because a mother who loses her children is wounded beyond hope of healing.

Giampen and the others
Sister Angela divides her time between Giampen and others like her who have lost someone, or even everyone, like the family next door, in which the father and only one of his children survived, or like another mother, who clasped her two children to her body in the moment of the tsunami, but whose littlest child was ripped away by the force of the water, and was never seen again. There are also stories that ended well, like that of a fisherman who was out in his boat working, but that Sunday had also brought his two little sons. They were over two miles from the coast when he saw the first wave looming at a wild speed. Sensing the danger, he put life-preservers on his sons and himself. Smashed by the fury of the wave, in a few seconds they found themselves grasping the top of a tall palm tree on the shore, deathly shaken, wounded, but alive.

There are many people like them who, even though they have lost their home or the little they owned, now need only one thing: someone to care for their desperation and pain, to give them hope and a reason for going on and beginning everything again. They are Buddhists, and for them, even if God exists, He doesn’t care about their lives. Sister Angela arrived a few days ago in Takuap Pa, a village near Kao Lak, which was devastated even more than Phuket; initially famous for its many new hotels, Kao Lak now is even more famous for its Sofitel Hotel, which has become a morgue for hundreds of Scandinavian tourists.

Appeal to the congregations
The Bishop of Suratthani, the diocese of the south responsible for the 5,000 Catholics scattered throughout over 500 miles of territory, requested help from all the congregations present in Thailand. Sister Angela, who usually works in a Bangkok slum, explained to the children and adults she has been helping for over a year that she had to go, because there were people who were needier than they. As soon as she arrived in the village of Takup Pa, she realized that the organization was excellent. The King of Thailand had taken all the orphans under his protection and care, and the soldiers had used all the means at their disposal to set up tent cities around every little hospital or school in record time. The humanitarian organizations of the world had sent doctors and nurses to care for the wounded, and teams of volunteers were working to clean up the mud, water, and ruins. All the dead had already been gathered days before, even if every so often the seas gave up some of the bodies of the people crowding the lists of the missing. But in the aid headquarters, no one had thought that many of the survivors needed not only daily meals but, above all, the companionship of someone to listen to them, someone to whom they could unburden themselves. How can you begin again after what happened, if you no longer have a reason for living? So, Sister Angela tries to do this, above all, and goes around with patience from camp to camp to meet these people. If they are still too shocked to speak, she sits by them and waits patiently, even for hours. Giampen, the name of the young mother, means “needed” in Thai, and Sister Angela uses this fact to try to explain the reason for going on: this mother, even though she has lost her children, is still important, for she is needed to help the father who lost his wife and now cannot care for his son because he has to begin thinking about rebuilding his home.