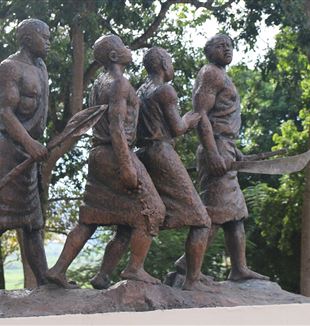 When he first visited Uganda as a young functionary of the Foreign Office, Winston Churchill defined Uganda as “The Pearl of Africa.” The country is truly rich in extraordinary natural beauty, offering splendid scenery and a wonderful climate. Arab merchants reached there before 1850, and the first Europeans to set foot in the area were the explorers, Speke and Grant. These were followed by other explorers, but these contacts had little effect on the Kingdom of Buganda until the arrival of Henry Morton Stanley. He was more impressed by the organization of the Kingdom of Buganda, and by the welcome accorded him by the king, Mutesa I, than by the abundant natural beauty. It was Stanley who, on November 15, 1875, published a letter in the Daily Telegraph, with his famous appeal for Christian missionaries to go to evangelize that kingdom, since the kabaka, Mutesa, seemed to be “interested” in the benefits of Christianity. This opened the way for the coming of Anglican missionaries of the Church Missionary Society in 1877. The Catholic missionaries, Simon Lourdel and Brother Amans of the White Fathers landed in the port of Entebbe in 1879, today the site of the international airport.

As Stanley had foreseen, Christianity soon took root, not only in Buganda, but throughout the whole of present-day Uganda. The Kingdom of Buganda became virtually a Christian nation in the 19th century, and today, Uganda is a predominantly Christian country. The recent census registered 80% of the population as Christian (41% Catholic; 35.9% Anglican; 4.6% Pentecostal; 1.3% Orthodox and other Christian denominations). What reasons are there for this original aspect in the history of the Church in Africa? Evidently, it was not the outcome of a clever strategy on the part of the first missionaries, since in the first years there were only a handful of them, Protestants and Catholics included. The fundamental factor was the work of the Holy Spirit, who worked through the extraordinary dedication and offering of young Africans, today venerated throughout Africa as the “Uganda Martyrs,” young African lay people, newly converted, of different tribes, and at the same time missionaries and evangelizers of “The Pearl of Africa.” One of the most stupendous events you can witness in Uganda is the huge participation in the annual celebration of the Martyrs’ feast on June 3rd. The pilgrims come from the whole of East Africa and the lands of the Great Lakes: from Kenya, Tanzania, Rwanda, and Congo. Those coming from far away reach here at the end of May. Hundreds of thousands crowd the shrine at Namugongo, inaugurated by Pope Paul VI and visited by Pope John Paul II. They are joined by many bishops, many of whom are sent by the Holy See.

The Kingdom of Buganda
After the arrival of Fr. Lourdel and Brother Amans, their first house was built between July and September 1879, and the first chapel was ready for the Feast of the Immaculate Conception, December 8th. The first baptisms were celebrated in 1880, and it was during that year that four of the future martyrs were admitted to the catechumenate. The martyrdom took place during the years 1885-1886.

The Kingdom of Buganda was an absolute monarchy, where the kabaka had power of life and death over all his subjects. Kabaka Mutesa followed a policy of “divide and rule,” seeking to profit from the divisions between the religions of the foreigners–Muslims, Catholics and Protestants, shifting his preference according to possible political advantage. There were continuous tensions, so much so that the Catholic missionaries were forced to leave Buganda in November 1882. They were to return only in 1885, after the death of Kabaka Mutesa, under his successor Mwanga. Fr. Lourdel was welcomed by a whole host of Christians, many unknown to him. The missionaries had left only 20 baptized Christians and 300 catechumens on their departure. When they returned, they found that 170 people had been baptized on the point of death and more than 8,000 had been converted to Christianity as Catholics. The home of Andrew Kaggwa had become the church, and the community had grown thanks to the passion of those few Christians that Lourdel had left behind almost three years before. They would never have imagined that within one year those same young people would shed their blood for Christ.

The Murder of Bishop Hannington
Mwanga was less capable in government than his predecessor, and was prone to violent outbursts in trying to keep control over what he saw as threats from the colonial powers which, for the time being, limited themselves to keeping outposts on the coast of the Indian Ocean in Egypt and Sudan. Things came to a head when the Anglican bishop, Hannington, decided to go to Uganda himself, passing through the territory of the Masai, in present day Kenya. The kabaka was terrified of the accusations made by the Arabs, that the Europeans wanted to take possession of the Africans’ lands. Moreover, amongst the Baganda there was an ancient prophecy that foreign invaders would come from that direction to conquer their kingdom. So the kabaka had the bishop murdered, and this signalled the beginning of a persecution of Christians that was to last through half of 1885 until the end of January 1887. The first martyr, Joseph Mukasa Balikuddembe, was killed on November 15, 1885. He was an important official in Mwanga’s court, the major-domo and one of the kabaka’s most trusted councillors. Joseph had asked the king to spare Bishop Hannington and, after he had been killed, dared to reprove the king for the crime, saying that the former king Mutesa would never have done such a thing. Though he said this while affirming his loyalty to the king, in such a climate of tension it was not difficult for the traditional chiefs to convince the king to turn against him and to get rid of the Christians, who dared oppose his will, preferring to obey the missionaries. In particular, after their conversion, the pages refused to satisfy the king’s wishes, since he had the habit of using them for unnatural sexual acts.

Young Laymen
There are 22 martyrs canonized by the Church, but the number killed during those long months is much greater; it is estimated that at least 200 Christians were killed for their faith. Among them was a woman, the princess, Clara Nalumansi. Following her conversion to Christianity, she was found murdered after she had destroyed pagan fetishes in her care at the court. On the day of the great holocaust, June 3, 1886, Charles Lwanga and 31 others were burnt alive. Who were these Ugandan martyrs? Why are they held in such great veneration today? There are parishes, schools and hospitals dedicated to them all over, especially to St. Kizito, the youngest among them, even as far away as Nairobi, Lagos and Khartoum.
As for the color of their skin, race and culture, they were true Africans, descended from the Bantu race and from the peoples of East Africa. They came from different tribes, though the majority were Baganda, others being Basoga and Banyoro. They were Africans and martyrs, successors of the great African martyrs of the first centuries, like Cyprian, Felicity and Perpetua. Many were still children or adolescents, others were adults and married, and many held important social positions. Joseph Mukasa was the king’s major-domo, Andrew Kaggwa was the king’s bandleader, many were royal pages, others were high-ranking soldiers. They had a lot to lose by their conversion. Being present at court was an opportunity for many young people to be launched on political and military careers, refining their ability in government and intrigue, and learning military and courtly skills. When they met the missionaries, they finally discovered what it was truly worth living and dying for. When put to the ultimate test, they had no doubts, but professed their faith to the end.

Burnt Alive
While a good number of them were killed over a 14-month period of persecution, the largest group was condemned to death on May 25, 1886, at the court at Munyonyo on Lake Victoria. The kingdom was well organized, and had a fixed place for executions, at Namugongo, where the executioner, Mukajanga, lived. He was a close relative (uncle) of one of those condemned, the seventeen-year-old Mbaga Tusiinde. With other relatives, he tried, all along the journey to Namugongo, to convince the young man to renounce his faith, but to no avail. After the sentence, they walked twenty-seven miles from Munyonyo to Namugongo, a real via crucis. Some were killed on the way, like Andrew Kaggwa. Parents and relatives followed the group, trying to convince them to renounce their faith so as to be spared.

Very few gave up their faith; most of them accepted their fate, encouraging each other and singing happily because they had the grace to witness Christ. The soldiers kept on beating them and insulting them, trying to terrorize them. After eight days, the condemned arrived at Namugongo.
There, on the Feast of the Ascension, they were burnt alive, Protestants and Catholics together, joined in martyrdom along with some pagans, probably criminals condemned to the same death. When it became evident that belonging to Christ meant martyrdom, Charles Lwanga baptized the catechumens Kizito, Mbaga, Gyavira and Mugagga. Charles Lwanga told the fourteen-year-old Kizito, apparently the weakest of them, who had been given the name John Baptist, “When the final test comes, I’ll take your hand. If we have to die for Jesus, we will die together, hand in hand!”

The Last Photograph
It was some of the executioners and those who denied their faith who, along with other Christians, were the witnesses who provided the information necessary for the cause of beatification. One of the survivors, Denis Kamyuka, not only gave the information about the holocaust to the White Fathers, but was also present at the beatification ceremony in 1920, during which he wept while his companions had their crown of martyrdom acknowledged by the Church.

Kamyuka, mysteriously spared by some of the soldiers, who judged him incapable and too weak for the death penalty, became the martyrs’ witness.
There is photographic documentation of the 22 martyrs. One year before the martyrdom, those responsible for the Christian community in Buganda went to attend the ordination of Bishop Lavinhac in Bukumbi, in present-day Tanzania. In a photograph of the event, it is possible to identify some of the people. The photo was taken at the beginning of October in 1885. So today, the pictures representing the martyrs that appear in the churches in Uganda, and in the Basilica of Namugongo, bear a true resemblance to those young people who shed their blood 120 years ago in order to keep faithful to Christ.

Thirty-three years later, two young Acholi boys, Jildo and Daudi, gave their life for the same reason in the north of the country at Paimol near Kitgum.
But the history of this country is full of glorious witnesses. Dr. Joseph Kiwanuka, the Catholic politician who founded the Democratic Party, was assassinated on the orders of Idi Amin; Francis Bakanibona, who belonged to CL, was killed by soldiers of the second Obote Government in the Luweero Triangle; many catechists and Christian leaders were killed for their faith in recent years by the rebels of Alice Lakwena, Joseph Lakony, and Joseph Kony; and to add to this are the many missionaries who have made the supreme sacrifice over the years in order that Christ’s Church be present in these lands.