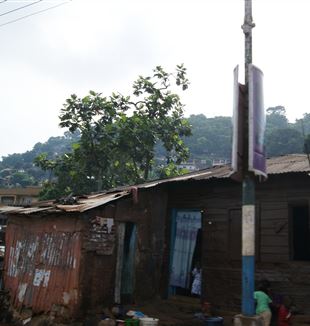 Christmas. It should be a peaceful Christmas. There is no shooting. People are moving around in peace, and for us that’s enough. But can we call it true peace? Peace is not just the absence of war, but a social harmony that is not yet here. Sadly, after ten years of war, we cannot quickly restore that harmony that cost generations of work. And then, we’ve still not realized how traumatized our people are.

Program of disarmament and reintegration
The story of Mohamed is perhaps the typical story of a good many of the 57,000 ex-combatants whose program of disarmament and reintegration into civil society should have been completed at the end of December 2003. In the meantime, those who were boys a few years ago are now adults; they are treated like adults and must behave as adults; but we can ask what has actually been done for them, to enable them to face up to life responsibly. Their situation is different from that of youngsters who have grown up in a normal environment, helped and supported by a family. They are often alone, idle, frustrated, maybe with drug problems, and when evening comes they go in search of somewhere to spend the night. A word has been coined for this, too: “Catch”—“Where are you going to sleep tonight?” “A de catch! I’ll manage!” This means that some friend has offered him a corner where he can lie down for the night.

Most of them have gone back to school and they will stay in school for a few more years, provided there is someone to pay their school fees and the other connected needs, like uniform, shoes, books, food for survival, and so on. For many, going to school has become an occupation in itself, not a preparation for a job, because those who come out from the ranks of the students end up on the streets. So it is better to stay in school, perhaps with a couple of children to support. And who pays? This, too, has become a privileged class of beggars. But at least you know where they are, you know they are under control, that they are kept occupied. The problem is that apart from the school, no other structure is there to welcome them. There is no work to be had.

Apprenticeship and tools for work
Mohamed doesn’t belong to this group, but to the group of “apprentices.” But, all the same, he finds himself in the same situation. He had done his work practice and now doesn’t know where to turn in order to survive. On paper, the recovery program for the ex-combatants is an intelligent program, although the incomprehensible length of the course is frustrating.

Once a youngster is ready for work, it takes up to three months for him to get the tools of his trade. When he finally gets them he is unable to survive and so he sells the tools to meet his immediate needs.

What’s to be done before the situation becomes a national problem? Frustration can lead to a return to violence—not necessarily a war of fratricide, but a peace constantly disturbed by street violence, armed robberies, and social tension which the forces of order will be unable to control, since the police department, too, is undergoing problems of restructuring and recovery.

One of the reasons why it’s difficult to find work is that a few months’ apprenticeship is not enough to make a real tradesman who is up to the job.

A tiny child a few months old
Mohamed went to a building firm so as to improve on what he had learned from his private tradesman. In the reasonable up-to-date carpentry workshop he could even learn to use the machines. I asked them to take him on even without a salary, just to learn. Mohamed did this for a few months, and I helped him survive.

He came back to see me today, carrying a tiny child, a few months old: “It’s my son,” he said. I didn’t believe him, but one of those present assured me it was true. “And her?… the mother?” With a nod of the head, because Mohamed speaks like that, more with signs than with words, he let me know that she was living not far away. It was clear that this was so, because a twenty-two-year-old boy doesn’t go all around the city with a bundle that wets itself.

It’s better, I thought, than the situation of Kadiatu, who has to carry her bundle around alone. At least Mohamed has accepted his responsibility. “How on earth?” I dared to ask him. “Love!” he replied. “O yes, love”—I preach love. He listens to me… and he makes it… O to be understood!

It’s not easy for me to get rid of Mohamed, and I don’t really want to, because he has been hovering around me for six or seven years, and he has no other point of reference.
In January 1999, when the rebels occupied the town for a month, they rounded us up and took us away. While I was their prisoner, Mohamed re-entered their ranks and came to see me, armed to the teeth. During the rebels’ retreat from the capital, in their flight toward the interior, Mohamed reached Makeni, 100 miles from Freetown. He was lucky to be still alive and was trying every way he could to lay down his arms and uniform and come back among the ex-combatants, at St Michael.

In Makeni, his presence and his attention to the priests saved the life of one of them, because it was he who deviated the shot that could have been fatal. He confronted one of his fellow soldiers physically and came out of the fight unscathed, but his situation was becoming more difficult. Then he managed to escape.

With the companions at St Michael
When I came back from Italy, after the five months that the doctors had asked me to stay there, I found him in St Michael, just as he was before, always calm and composed, as I had always known him to be from the day the Intervention Force (ECOMOG) first brought him to me for care.

He was then a rebel, and had been caught while fighting to take the airport. Luckily, he was not killed, and he got off with a few months’ prison sentence along with six other companions. I kept all seven of them for weeks. I can’t say all they got up to because I’d have to write a separate book.

And so he and a couple more of those original seven or eight are still hovering around.
He handed over to me his identity card, telling me, more with his eyes than with his mouth, that he would like another. Of course, the identity card says, “Mohamed… disarmed, demobilized, reintegrated….”

“ I’m ashamed of it,” he said. “Just as well!” I thought. It’s right for him to have an identity card saying who he is, not who he was. He’s just a poor soul, after all. And now, instead of one, I have three of them… and that little brat, if only he would stop crying! If he learns not to wet himself, by Christmas I could pass him off for the baby Jesus; after all, his father is a carpenter like St Joseph.

I still haven’t met his mother…. I hope she has a face like Our Lady. She should be about the right age. I certainly don’t expect a Virgin Mary, but the way things are going here, we have to be satisfied. On the other hand, we can all make mistakes and to be satisfied can become one of the “cardinal” virtues. A few years ago, when I was the parish priest in Calaba Town, I had prepared a play on the Holy Family—a Christmas play, with a lot of pomp, dignity, and “liturgical” piety, in a Church full of people. St Joseph, Our Lady, the child. The scene was really fine… and they came to whisper to me, “The Baby Jesus is called Mary”!