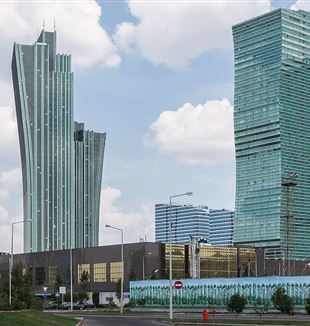 Astana
By Paola Ranconi
Fr Edo Canetta was in Italy for a few days, but he has been in Kazakhstan for eight years, first in Karaganda, and now in Astana, the capital, where he has been teaching Italian language and literature at Eurasian University for several months now.

The Pope’s visit to Kazakhstan last September was an event of paramount importance for the whole country, not just for Christians (see Traces, Vol 3, No 9, October 2001). John Paul II came into contact with Kazakh culture through the translations–to which Fr Edo also contributed–of major texts of the local literature. “The Pope,” Fr Edo says, “referred to these texts in his speech, greatly amazing the population because he used their language, the language that was Genghis Khan’s. Few priests here in Kazakhstan speak Kazakh, and no one wants to learn it, even though it is the most widely used language. But mission comes about also through this cultural and educative gesture; if you know a people’s language, you come more profoundly into contact with its tradition, and you can transmit whatever you wish.”

A global village
Fr Edo says, “Eurasian University is a little like a global village; everybody knows each other, and even without wanting to, you meet everybody. You say something in class and it is all over the university, for good or ill.” An example? “Two weeks before I came here to Italy, one morning (with a temperature of 38 degrees below zero) on my way to the university, I was walking against the wind–said like that, it may not mean much, but it can be a serious problem! In a word, I couldn’t go forward. I felt someone take my hand. I turned around. It was a girl I had never seen before, not one of my students. ‘Come on, Edoardo!’ she said, and helped me not to slip on the ice. ‘Wonder is the beginning of knowledge,’ she went on. ‘Who are you?’ I asked, totally astonished. She started laughing and told me that she studies with my students, even though her minor language is Arabic. She told me that the day before, they were studying together for their Statistics exam, and a bit tired and discouraged, were discussing among themselves when one of my students said, ‘Edoardo is right; in everything, we have to start from what amazes us, otherwise it all gets heavy.’ At first, I didn’t even recall saying that in class, then thinking about it some more I remembered I had made an example to explain the verb ‘to be,’ which doesn’t exist in Russian. Just think: those words said by chance had been passed on as a judgment.”

At the university, the students study English and German as their first language, and Italian, Chinese, Arabic, and Persian as second ones, these latter all considered somewhat exotic languages! “In Kazakhstan,” Fr Edo went on, “they feel greatly the myth of Italy, its style, interior decoration, cooking; not long ago, we were invaded by Italian panettoni!” Fr Edo has only been teaching at the university for a few months, but a good relationship has already been established with the students. “I have invited my students to my house several times,” he says. “No formalities; we talk about life and together judge what happens to us. We do School of Community like this. This is the beginning. Giving a judgment about life is what fascinates most. I told them that when I get back, one afternoon we’ll get together and I’ll teach them to study, because they don’t know how to they learn by memorizing and they don’t know how to get organized.”

Arabic rock
Certainly, one doesn’t get bored in his class. “I often use music,” Fr Edo says, “and songs. They learn faster. The group that studies Arabic is right next to us and they see my students having fun, becoming friends, and they make attempts at an approach. One of my students teaches them the songs in Italian. So I have looked here in Italy for something in Arabic that is not the Koran (their Yemenite professor takes care of that!). I went around to all the bookstores in Milan, imagining, because of the large number of Arabs here, that I might find, who knows, some publications put out by the city or the region. Except for a Bible, there was nothing. Only in Rome, I turned up a guide to Italy and the Vatican ordered by the Pope for the Jubilee. I also found some Arabic rock music: it’s horrible, but at least they widen their horizons. Thus a really nice, cordial relationship has arisen, to the point that my students sometimes complain, ‘You like the Arabs better than us!’ You can also use music to enter into a relationship, but only if you have something to say, otherwise it remains an element of pure folklore.”

Ethnic creed
Seventy percent of the Kazakh population claims to be atheist, but when asked, “What religion are you?,” a question that only the other 30% should answer, 54% say Muslim. For them, this is an ethnic question, more than a religious one. “They reason like this,” he explained. “‘I am Kazakh, therefore Muslim.’ Or, ‘I am Russian, therefore Orthodox,’ and maybe they have never even been baptized.” Of his 27 students, divided into two classes, 24 are Muslim. But in December, only two of them observed Ramadan. “For these two,” Fr Edo says, “I postponed a dinner at my house, to which I had invited everybody. I did this out of respect, and they understood and appreciated this. Then, among other things, we did a day of fasting together, because it coincided with the Pope’s fast on December 14th.”

At the university, Fr Edo does not go unnoticed. “If you do something a little different, everybody knows you. For example, I always get there before the others, I greet all my colleagues and the students, and they appreciate it very much. I come in with a huge brief case, risking losing my balance on the ice, with the tape recorder for the music for the kids, since the university does not furnish it. We have to get by the best we can, don’t we?”

Almaty
by Lucia Beltrami
“Ever since I saw that man and listened to what he was saying, I have been with you. I find myself crying at the most unexpected moments, and I have something like a fire inside that my hands, that I cannot contain by myself.” These were Aljona’s words after she met us. She had been invited by Elmira to the meeting with the Pope, traveling almost forty hours on the train round trip, Almaty-Astana, to go see and hear someone who represented something in which she did not even believe. But Aljona, because she liked Elmira, or maybe out of curiosity, said yes to that invitation, and her life has changed. Aljona, who in her life has seen and lived through so much, she, who grew up in an orphanage and to escape from that life got married very young, working at a thousand jobs, in a disorderly life with a husband who, as soon as he started getting ahead in his army career, left her. Now Aljona is the most faithful at School of Community, at charitable work, at everything we propose to her. She comes to Mass and sits there, without taking Communion, and says to us, “I don’t know why it is like this. This fire is getting stronger, and I know that it is for me.” How many stories like this one, how many encounters in this land!

Winter vacation
Between February and March, the communities of Karaganda, Astana, and Almaty, the cities where the Movement is present, lived the gesture of winter vacation. No programs, formulas, or manuals for perfect organization (to tell the truth, here it is easier to find organized chaos than meticulous organization!), but a beauty that each of us here has encountered, that has overwhelmed us and changes our lives. Some came home the same as they were when they left; others thanked us for the vacation and asked us to keep them in mind if we should happen to organize another one; and others still, like Misha and Olja, said, “Whatever you say or do, even if you send us away, we are not ever going to give you up!”

And so here we are, between one basketball game and another, while we prepare the Feast of Naurys–the spring holiday, which is very important to the Kazakhs–living the greatest challenge since the Movement has been present here, which is that of work. For many of the young people we have met in these years have finished their university studies and are already working or are looking for jobs. Here, just as (and more than) elsewhere, the problem of work is very deeply felt. For many, it is a matter of survival; for many others, especially those who had the good luck to be able to study, it is the chance to redeem themselves, and professional success is the horizon of their desires. This is why, faced with the choices of every day, the challenge is played out of who we are, of a new mentality that prizes creativity.

The “big chance”
Ajnur, Muslim by tradition, met at the university, has always cared greatly about her work. She studied English, spent time in Singapore, and now works in Aksaj, an oil field north of the Caspian Sea. Not long ago, she was offered a job in London, but instead of being happy about her “big chance,” she said to herself: “Even if I reached the top, what would I gain if then I am not happy?” Now she is looking for work in Almaty in order to stay with these friends in whose midst she has glimpsed a chance for happiness, for her good. To those who ask her why she made this choice, she answers, “I only know that I want to be happy and I saw this there for me. I am certain that I will not lose anything; indeed, quite the opposite!” Her decision, in any case, has already yielded its first fruits: a friend of hers, whom she had told about her decision and who was living through a difficult moment at work and with her friends, said, “Who knows why someone has always to complicate something that is so simple! Anjur shows me that all you have to do is look and stay!”

Many of us, moreover, are teachers, some at the university, others in other types of schools. Some have started to meet together, working on the contents and methods of our profession, and now an idea is circulating of organizing a meeting in July on the problem of education. We’ll see!

On March 16th and 17th, the meeting of CL Responsibles of Kazakhstan was held in Karaganda. The theme was the letters of the Holy Father and Fr Giussani for the twentieth anniversary of the Fraternity. The urgency of Fr Giussani’s judgment, his call to what was involved, to our responsibility in the face of what we have encountered was evident to all of us. Precisely with regard to responsibility, Ljuba said to us, “It is as though God, through Fr Giussani, said to me, ‘I cannot do anything without your freedom, I cannot build My house here.’”

What grace has come to us in encountering someone who does not stifle the fire, but on the contrary builds it higher! Saint Catherine said to the Pope, “If you will be what you should be, you will set the world on fire.” All of Kazakhstan is waiting to be set on fire, and Aljona, now, is at home among “incendiaries” like herself.