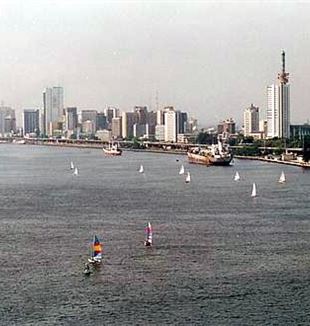 Charitable work is one of the proposals with the greatest participation by the GS youth in Lagos who attend the Seed Remedial School. Normally, we go to the village of Ikate Waterside, on the lagoon, where our “little bamboo school,” attended by the fishermen’s children, is located.

The number of kids participating is always high, between 40 and 50. We go regularly, one Saturday a month, in the early afternoon, when school is out, to play with the village children.

Last January 27th, the Ikeja quarter of Lagos was the scene of an accident that was reported worldwide. A munitions deposit exploded as the result of a fire. More than 600 people died, houses were destroyed, and the inhabitants evacuated to some military quarters of the city. During School of Community, the kids expressed a desire to “do something” for the victims of this terrible disaster. Talking about it together, seeing all the difficulties and our scanty resources, one boy in the second year of high school said,: “Maybe we can’t give them any material help, but there is one thing we can do: go play with the kids and make them happy to have us there, just as we learn in our charitable work.”

Yellow vans
So we got organized with rented transportation (derelict yellow vans) to go to Oshodi, a military quarter on the other side of the city, which was housing more than 200 families who were victims of the explosion. We arranged with the catechist of the Catholic Church to notify all the families and the children that we were coming. The kids also organized a simple collection of clothing and cookies to distribute to the children.

On Saturday, February 23rd, we set out with 35 kids, and after an hour’s journey, we reached the military quarter and the courtyard onto which the barracks temporarily housing the families faced. Immediately, more than 100 children of all ages arrived, curious at first (also because whenever there is an oyibo, a white person, they are always curious), then the kids started organizing themselves into groups with the children of various ages, proposing games and singing nursery rhymes with them. The parents looked on, clearly pleased, also because of the serene atmosphere that was created. We went on like this for more than an hour, despite the humid heat, our sweat, thirst, and exhaustion. Before we left, Peace, a Protestant girl in GS, wanted to explain to them why we had come. “Ever since the day when we heard what happened to you and your families because of the explosion, we wanted to meet you and share a little of our time with you, and in this way to make you happy. Now I know some of you by name and I am really glad!” Before leaving, we tried to distribute what we had brought.

A desire of the heart
Talking among ourselves about that day, it was evident how important an experience it had been, the fulfillment of a true desire of the heart and the discovery of something new for our own person. As Wilson said in this simple note he wrote us, “I am a very shy person and many times I find it hard to share my talents, the things I know with others, even if sometimes I have the words on my lips. But today was different; it seemed like a miracle to me, as though I were receiving an extraordinary strength. I was so open, I was able to play with the children, I pulled them into the games, we sang and joked around together, I taught them slogans, and this entertained my friends and also the adults who think I am shy. I thank this companionship and God who called me into it. I would like always to live by using these abilities.”