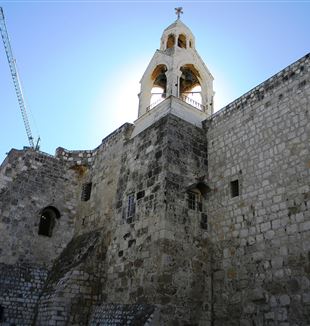 Christians “seem crushed under the weight of two different extremisms, which, independently of the reasons fueling them, are disfiguring the face of the Holy Land.” This is the picture summarized very eloquently by John Paul II at the summit he called last December on “The Future of Christians in the Holy Land,” attended by local bishops and representatives of the international episcopacy. Numerous recent facts confirm the Pope’s words. Even though the emigration of Christians (who number no more than 3% of the Israeli and Palestinian population) is traditionally tied to the state of tension and violence that has lasted for more than half a century, many point to the recent rapid increase in the growth of fundamentalism. Islamic fundamentalism, according to the Israelis; Jewish fundamentalism, according to the Palestinians.

The ban
The ban imposed by Premier Ariel Sharon to keep Yasser Arafat (the only Islamic leader who desires to be present every year at a Mass) from attending the Christmas Eve celebration in the Basilica of the Nativity in Bethlehem–just as he was forbidden, a few days later, to take part in the Orthodox service–gave both sides the chance to exchange accusations once again. Rafi Yisraeli, historian at the Hebrew University of Jerusalem, is puzzled by the fact that many Christians feel that Arafat is their defender. In Bethlehem, he says, until 50 years ago they were 80% of the population and the Muslims 20%; today the situation is precisely reversed. For this reason, he wonders, “If Christians were really protected by Arafat, why did they leave?” Yisraeli has no doubts about this: “The phenomenon can be attributed to the reawakening of an Islam that wants to occupy all of Palestine and chase the Christians out of their holy places. And in this scenario, along comes Arafat claiming to be the great protector. But in reality he is nothing.”

Replying to these accusations is Bishara Daoud, one of the two Christians from Bethlehem serving in the parliament of the ANP, as well as the source for the idea of placing a folded keffiah over the chair reserved for Arafat at the Mass. “The fact of having prevented our President from participating in a religious celebration,” he says, “broke the rules of free access to the holy places respected ever since the time of the Ottomans.” “This violation is, however, not new: since 1993, Israel has prevented non-resident Palestinian Christians from going to the Holy Sepulchre, just as many Muslims are forbidden to go to al-Aqsa. Even though I am a member of the council of the Greek Orthodox community, the soldiers kept me from going to Jerusalem to take part in the installation of our new patriarch. ‘You are in Israeli territory,’ they said to me before dragging me away to a police station for extensive questioning.”

The reasons for the “flight”
We asked Daoud about the growth of the fundamentalist phenomenon and the resulting “flight” of Christians. “The reason for the massive emigration of Christians,” he answered, “has to be sought elsewhere. Two-thirds of the land of the Christian places near Bethlehem, like Beit Sahour and Beit Jala, has been confiscated to build colonies. Today, to reach Ramallah, you have to go a long way around to avoid crossing one of the 29 Jewish settlements that surround Bethlehem. Thus, the Christians move away because they see their activities, based mainly on tourism and crafts, blocked by this situation of siege and the escalation of violence. When they bomb, the Israelis do not distinguish between Christians and Muslims; in fact, four of the 32 dead in the region were Christians. Every Palestinian is for them a good target, because Sharon does not want only to destroy the ANP, but to destroy also our ambition to be an independent state.”

A more dispassionate comment was offered by Fr Vincent Malham, provost of the University of Bethlehem, who deplores the fact that the Christian institutions of the city have ended up in the crossfire. “The attacks continue to create incalculable physical and psychological damage in the city where Jesus was born, and besides our university, over which the Vatican flag flies, numerous buildings like Holy Family Hospital and St Catherine’s Church have been hit.” For her part, Sister Marie-Abel, of the Catholic school in Gaza, affirms that the origin of the emigration is to be sought in the block of negotiations and the difficult economic situation, a problem that strikes Christians and Muslims alike. “We cannot tolerate the existence of a place where injustice reigns supreme,” she says. “The economic isolation, destruction of homes, uprooting of trees kill hope. Many young people in Gaza believe that the only solution is to emigrate. For the first time in 50 years, parents are encouraging their children to build a better future somewhere else, especially those who have financial means and professional skills. But, paradoxically, Palestine needs precisely these people in order to rise again!”

Under the ashes
Whether political or religious, emigration is only one of the aspects of a tension that in the Holy Land is affecting mainly Christians. The beating of Catholic teenagers in Jaffa during a school trip in the Negev Desert by Israeli kids their own age or the burning of a copy of a Gospel in an Israeli school, even though condemned by the Israeli authorities, testify to a fire smoldering under the ashes. No less worrying is the determination of Muslim radicals in Nazareth to build a mosque right by the Basilica of the Annunciation. At Christmas, the organizers of the traditional Christmas parade of Christian Scouts report that they lived in fear that the event might be disturbed by Muslim youths. This radicalization is stirred up even from abroad. At the end of a congress recently held in Beirut, 200 ulema from 35 countries stated “in the name of all peoples, rites, and countries of the Islamic nation” that “all Palestine, from the river to the sea and from north to south, with all the cities and villages, is Arab-Islamic land” and that “historic Jerusalem is an Arab-Islamic city and it is thus the task of all Muslims to work to free it and defend it from Jewification.”