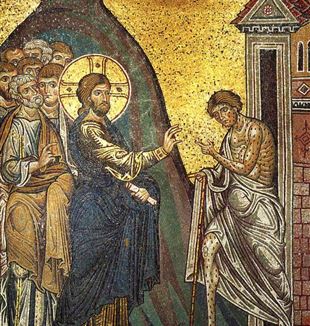 Bondoukou. I would never have imagined that one day I would visit the sick in a remote village of the Ivory Coast near the Ghana border.

And yet, here I was, in a squalid, sparely furnished large room in the Catholic mission in Bondoukou, seated with Grégoire and two Sisters who were nurses. Another Sister admitted (one at a time with their families) some men and women in whose eyes the light had gone out.

I was struck by the attention and sensitivity my friend showed toward the patients and their families. For all of them, he had advice, a kind word, an indication of therapy, and only for some, admittance to the center at Bouaké.

Grégoire used to be a tire salesman. I don’t know how he does it, but today he can distinguish between drugs, dosages, and the need for medication, substituting for the scientific knowledge he lacks the experience he has gained and the tension to respect others as the suffering Christ.

We did not get up from our seats for more than three hours. Grégoire did not eat, did not take a break, but I did not think that this total charity of his would draw me in as well.

An Appreciated Task
In the end, I was worn out, with a weariness accentuated by the spasmodic attention required to understand the most important words of their conversations and thus to help Grégoire in his task. A task that is appreciated and esteemed: he saw more than 40 patients that day. People come from far away to meet with him, to alleviate the suffering of their loved ones.

Grégoire examines, gives away medicine, makes diagnoses. From village to village on the Ivory Coast, word has spread that Grégoire helps, takes in, rehabilitates persons with mental problems. Slowly, a new culture is replacing the traditional one that considered the mentally ill as possessed by demons, to be feared and chained up.

Grégoire has begun to liberate these people, to give them refuge and concrete help, and ultimately to bring them back to their original families. And I was there in Bondoukou just for this: for the return of 35 persons who were now well, and who, in front of the Bishop and the Prefect of the region, were declaring their joy and desire, unashamedly, to go back home.

In the forest one comes upon stories of experiences of faith and of total gratuitousness.

In Bondoukou, I met Fr Bardelli, originally from Lombardy, Italy, who has been in Africa for more years than he can count. He told me that the arrival of Christianity in distant African villages enables everyone to acknowledge others as persons, whoever they are, in all their dignity. He stated, too, that even the civilian authorities ask for Christian communities to come in, because only with the Christians do the people of the villages begin to live a little better.

In the meantime, Grégoire did not stop for an instant; he slept little, ate even less, and was constantly active. One day he asked me to drive the car and went soundly to sleep at my side. Driving in an African city is a real adventure!

Chickens, agoutie and cobaye
On Sunday, November 25th, in the evening, the “psychiatrist of the forest” took me to one of the farms. Seen from outside, the scene might have looked fearsome. In the dark of the night, we were in the middle of some thirty African mental patients, who led us to see the fruits of their labors: a splendid crop of chickens, and a more unusual one of agoutie (a large rodent which is considered a delicacy) and cobaye (guinea pigs).

At the end of our visit, Grégoire told the patients that my presence in their midst was due to the charity of Fr Giussani and the history which started with him of the Movement of Communion and Liberation, explaining that only because God became incarnate is it possible for a man to bend toward another man. During morning Mass, a worker had upbraided too harshly a patient who was going toward the altar. Grégoire called together his group of helpers and went over the incident, stating that the patients are our “kings” and that no one would have dared treat his mother or father in that way (it was the Feast of Christ the King). He urged everyone to work with more respect. All his assistants are former patients.

Monday, November 26th: We took part in the liberation of a mentally ill person, Norbert, 28 years old, chained to a log in a foul-smelling closet in his house. Luckily, this time we were able to intervene early, because Alfonso’s notification of his presence arrived quickly. In fact, Norbert had “only” been confined for four months (in the past, unfortunately, help came only after years of slavery). Alfonso is a former “prisoner” who goes from village to village seeking out the enchained mentally ill. But by now, Grégoire’s work is well known and the African parish priests themselves call him, enabling him to free other persons.

The village of the “prophet”
In Bouaké, the Mass for the sick was celebrated by Fr Paolo Zuttion (from San Vito al Torre, Italy; with his brother Ranieri, a valuable friend, he shared with me this my third African experience) and by Fr Mario, an energetic priest from the PIME (Pontifical Institute: Missions Abroad), originally from the area around Treviso, Italy, who after retirement decided to come to the Ivory Coast to bring his contribution of humanity and hope.

Tuesday, November 27th, in the village of the “prophet,” we were not able to approach the mentally ill persons who were tied up in the forest. This is a haunting story: an entire village lives off the “business of the ill,” whom families send away and put in the hands of presumed healers, who do nothing more than lock them to trees with shiny chains, beat them to drive out evil spirits, and starve them because fasting “purifies.” Grégoire was deeply troubled at this liberation that could not happen, and it was an anguished experience also for me and my companions on this trip, Elisa from Gorizia and Piergiorgio from Trent.

A man came running, shouting “dai, dai” in Italian (“come on, come on”) because there was no time, there was no time: we had to go free the “new slaves,” we had to find food for more than 700 poor people housed in the centers. Everything is entrusted to Providence, who tenaciously pursues His plan to free, feed, take in and take care of suffering mankind.

A Catalan song was heard in the air: this was Louis, from Barcelona, another friend who was there with us. It was a hymn to life, to the positivity of reality, with a note of sadness. It was addressed to us, but in particular to the “psychiatrist of the forest,” who is crazy about Christ and thus crazy about man.

Grégoire set off on his baché; hanging out of his pocket was a rosary, his constant companion.