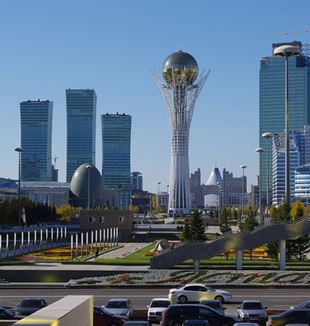 Julia is a pretty 25-year-old Kazakh girl and a businesswoman. Her clear, penetrating gaze gives a glimpse of a determined and positive character. Along with Vassja, her former classmate at the university, Julia is majority partner in the service company called GS Kazakhstan, with headquarters in Almaty. Among the other partners are Alfredo Scarfone, until a few months ago the top manager and General Director of Hewlett-Packard Italia, and Co.Export, a consortium of small and medium-sized businesses promoted by the Company of Works [Company of Works is a conglomeration of companies and personal initiatives joined together by people who want to understand and promote Christian ideals of work].

GS Kazakhstan–GS stands for Global Service–was founded in 1999, and since then has developed and defined its fields of action in support of Italian companies who want to establish or consolidate their presence in Kazakhstan. They provide market research, logistical assistance, translations and interpreters, partner and personnel recruitment, sales representatives, and organization of business exploration trips, fairs, and international exhibitions.

Is this too great a task? Not at all, if we consider that in the most recent years Kazakhstan has registered constant economic growth and is today one of the most interesting of the developing countries. In a double-page spread that the Italian financial daily Il Sole 24 Ore gave to the subject last January 25th, we read that “the gross domestic product grew about 9% in 2000, and the state budget might register a surplus.”
Julia recently came to Italy for a series of appointments with some directors of industrial, commercial, and service companies. We took this opportunity to meet her, together with Mr. Scarfone, and to learn about the human and professional path that has brought her to this point.

Italian in Russia
It was 1994, and Julia was studying in the faculty of International Economics and Commerce in Qaraghandy. Father Edo, an Italian priest sent fidei donum by Cardinal Martini, organized a course in the Italian language at the university, and out of curiosity, Julia and her friends decided to enroll. “This was the first encounter with a different human reality,” Julia recalls, “which caused some of us to ask what this something more was that attracted us and aroused our curiosity.” Through a scholarship program, the best students in the Italian course at the University of Qaraghandy were sent to Italy for a three-month internship. This is when Scarfone came onto the scene. “A priest in the Movement asked my wife and I to take in a foreign boy for three months. So we won a Kazakh! And for the first time, we looked for Kazakhstan on the globe.” The guest was named Vassja, a twenty-year-old boy who rode his bike in the frigid Milanese winter because for him, it was “warm weather”!

A friendship was born. After some time, Vassja asked to be baptized and asked the Scarfones to be his godparents.

After finishing their university studies, the group of friends started working. Julia found a job in Almaty, first with an Italian construction company, then with a Swiss firm that offered consulting services to the foreign companies who opened offices in Kazakhstan. In Almaty, in the meantime, the first small group of young workers had grown up around Father Livio and Father Massimo, on whom they counted for support and guidance. Julia and Vassja, who were becoming more and more involved in the Movement, were also developing the desire to experience in the work sector the same sort of protagonism they had known in their university days. And too, they were touched by the dramatic plight of so many of their friends who could not find jobs. This is, in reality, a widespread problem, because during the years of the Soviet Union when work was “guaranteed” for everyone, a passive attitude became the norm that is now difficult to change. Moreover, the old Soviet factories had been closed, leaving thousands of people on the streets, while the new businesses starting up were looking for highly specialized personnel.

The entrepreneurial spirit
So we come to 1999. Julia had gained significant work experience. Together with Vassja they decided to quit their jobs; they put together a plan of action and founded, with other partners, GS Kazakhstan. Scarfone says, “We founded the company with the firm intention that the majority be Kazakh, to foster their sense of responsibility and to encourage their desire to build for themselves and for the community. We put our know-how at their disposal to turn the ideas into concrete reality in the best way possible, so that the company could have a chance of success. Events are beginning to show we were right.”

Thus, as soon as he retired, the former General Director of HP set to work, starting with the most urgent aspects for company growth: the search for new clients, preparation of presentations, and telephone conference calls to check on progress and resolve problems as they came up.

Julia and Vassja were joined soon afterwards by a third budding entrepreneur, Jana. After quitting her own “steady job,” she set up a travel agency, Relint, in which GS Kazahstan is also involved. As the work increases, GS contracts more and more services from young university graduates and students, while other firms, both clients and partners of GS, turn to Julia and Vassja for the names of qualified personnel they can hire.

Fulvia the “competitor”
Professional relationships become an opportunity for friendship. This is the case of Fulvia, “who really should be considered a competitor of ours,” Julia points out. Because of her esteem for the two young entrepreneurs, Fulvia chose to take part in the Way of the Cross and has begun to be a part of their community.
The community is a widely diverse group. At their last summer vacation, about one hundred twenty people took part. Julia sketches a fetching portrait: “The community is made up of kids from different traditions. There are Muslims, Jews, Orthodox, or simply atheists. All are extremely open, waiting for ‘something,’ and they feel a fascination and interest with regard to our friendship.”

The most difficult obstacle in the verification of Christian hope comes precisely from the harsh impact with the world of work. From this point of view, GS Kazakhstan represents an example and a challenge. “For us,” says Julia, “it is the chance to make visible to everyone that the needs of life can be shared not only when one is a student, but also as an adult”–that is, when responsibilities weigh on you and you have to measure yourself every day against the pressing demand for efficiency and professionalism.

Scarfone, who has been named Honorary President of GS Kazakhstan, is visibly satisfied with his young partners. “They are beginning to enjoy the concept that you work for self-fulfillment and self-expression. What makes the difference between an excellent job and a mediocre one is the ideal of perfection and the efforts you make toward personal fulfillment.” This is a contagious ideal that, in this enormous central Asian country, is changing a small part of social and civic reality, one person after another. “I believe,” Scarfone adds, “that by continuing to work in this way, many other small businesses can spring up, a little at a time, specializing in individual sectors, so as to create a dense network of ‘artisans,’ that is to say, of small businessmen.”

“When you encounter and live a wonderful experience,” Julia concludes, “you acquire an assurance that makes you capable even of accepting the risk of starting up a business. This is what is happening in our community.”