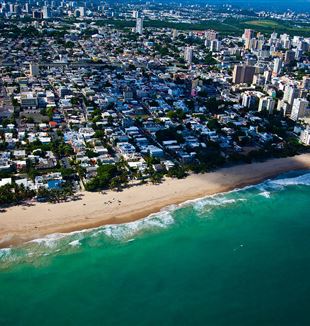 "Listen, what would you think of coming here to be a professor at the Catholic University of Puerto Rico?" Caribbean life began for me with this transatlantic phone call from Raphael to Trento, my hometown. I set out a few months later, and now here I am, telling you about life on "the enchanted isle," where everywhere you turn you see vistas and beaches of unparalleled beauty. Isla del Encanto: it's even written on the automobile license plates.

People are hospitable, they meet you enthusiastically and they greet you with the words, "Mucho gusto. Estoy encantado!" What is so surprising, from the very first encounters, is the great humanity of this people, which transpires through their way of expressing themselves, full of joy and pleasure. This simplicity and humility reappears especially in the changed life of many friends who for three years now have been moved by the passion and charism of Father Giussani.

Stopped at the traffic light
Jose and Lottie Irizarry, university professors, live in San Juan, the capital of the island and an important business and tourist center with more than a million inhabitants. In 1997 they met Monsignor Lorenzo Albacete, then President of the Catholic University of Puerto Rico.

"Thanks to CL," Jose says with feeling, "I learned the real meaning of the word 'mercy': a friendship founded on the Christian experience, which is not a collection of rules, but a heartfelt recognition of Christ's love for my life." His wife Lottie adds, "What amazes me most is the fatherly feeling in the Movement, transmitted by the friendship of men who immerse themselves in and love our story. And now that we are grandparents, our way of looking at our children has changed completely. It is as though after so many years we had learned truly to be a father and mother. I see this 'paternal attitude' coming out in me, not only toward my children, but toward everyone I meet. One day, I was especially in a hurry-I was going to an important meeting for work. On my way, at a stoplight, I met a man who asked me for two dollars so he could eat. I didn't pay much attention to him; my eyes were on the traffic light. Finally, it turned green, and I took off particularly fast. Once I was through the light, suddenly the thought struck me: 'I said no to Christ!' I passed the car in front of me a bit close and stopped at a fast food place, where I bought two sandwiches and a drink. I chanced a risky U-turn, afraid he wouldn't still be there. But luckily he was! I rolled down the window and gave him what he had asked. Then I took off, seeing an amazed face in my rear-view mirror. Who knows what he thought! This is only an example, maybe a bit simple, of how I saw that my way of looking at reality has changed because of the uniqueness of these friends who teach me that His presence is not in heaven, but here and now, in the reality that I have been given to live and see with my own eyes."

Every week Jose and Lottie open their house for the School of Community in San Juan, a moment offered to all. Last year, after a meeting at the University, one of them said to Sandra, a colleague, "Why don't you bring your husband to my house on Friday; some friends are coming!" Sandra was so surprised that she forgot to ask what was going to happen, and almost without thinking, said yes. She spoke with her husband Jorge, who said to her simply, "At this point, what do you want to do? Let's go!"

After this first meeting, others followed. Jorge, a respected director of an important hospital in San Juan, relates, "Everything that has happened to me, and everything that happens, now has a meaning. I am not afraid anymore, not even when faced with the most difficult situations with the patients at my hospital, because the Movement helps me to make a judgment about everything. I am serene because I realize that I am not alone. I have found my wife again, and my life with her has changed now because I better understand the meaning of time and of being with her. May everyone know this event!" Sandra adds, "Something beautiful happened in my life, I don't know how to explain it, but I feel that I can no longer live without this relationship. It is a strong attraction, continually renewed, that asks me only to stay with it. I don't want to miss this chance for myself, my children, and anyone I meet along my path."

Year-end party
Now we go to Ponce, the city where I live on campus, in a house of the Memores Domini with Giuseppe, Raffaello, and Daniel, who have been in Puerto Rico since 1997 as professors at the university. The house is always topsy-turvy, because it is a meeting place for many university students, among others. Last semester we invited about fifty university students for an end-of-the year party, with singing and dancing to the sound of bongos, cuatro, maracas and g¸iro, typical Puerto Rican instruments. Many accepted the invitation, which was a bit sui generis. Roberto, a student of mine, said, "Really, a professor is inviting students to his home? Cool! Can I bring my guitar?" "An interest in life itself, and not in a form," said Wadi, one of the first students Giuseppe met, in a philosophy class. Wadi had no doubts from the beginning: "What I have met is for me and for the world." After a very short time, his family as well was overwhelmed by this event, to the point that Emerito, his father, said, "The experience of the Movement is a chance for rebirth of an authentic Christian experience in Puerto Rico."

Susan encountered the Movement two years ago, also in Giuseppe's class. "When I heard him speak," she recounts, "I understood that there was a visible, tangible passion for all aspects of life. I was curious to know what was behind this man." A few days later, despite her commitments at work, as the mother of three children, and as a student, she accepted an invitation to School of Community. That day began a new path for her life and a crucial step she had not yet taken: Confirmation. Carlos and Gloridella also received the sacrament, while Sulema, who had grown up a Protestant, made her First Communion and Confirmation after two years of School of Community, developing in a watchful silence her decision to adhere to the Catholic faith.

At one of the most recent sessions of School of Community, an amazing thing happened: eight new people accepted to share this moment with us. We read the first part of chapter five of The Religious Sense and a section from Caligula by Albert Camus, then ended with a song by the Cuban singer and songwriter Silvio Rodriguez: Y nada m·s (And nothing more). JosÈ, a new participant, after having skillfully played the part of Caligula, said, "How great! I too, when I come home and look at Lake Portogues, ask myself questions. Gazing at the stars and moon in the sky, I wonder, is all this for me? If all this great show is here in front of my eyes and I am the only one to see it in this instant, then it is for me! In a word, it's like I'm the boss!" After School of Community, he peppered me with questions: "Tell me why you, an Italian, came to Puerto Rico." And I: "JosÈ, I came here because some friends asked me to." And he, right back: "Yes, yes, but why?" At this point, a bit embarrassed, I replied, "For the same reason that you're here now: because it is a basic human need to find an answer to the immensity and beauty of a starry sky. The response to life can be found only in a companionship that is seeking the truth. This companionship for me is now in Puerto Rico!"

"When are you coming back?"
Some time ago, the head of the Regional Seminary in Ponce, Monsignor Jes™s Diez, phoned Giuseppe: "Listen, why don't you all come to dinner some evening soon?" We accepted the invitation. We ate in half an hour, then moved to a comfortable sitting room, filled with about twenty people. Father Jes™s said, "Now, we are here to listen to your story, because I want these young men to know what the Spirit can bring forth in the history of the Church." So we told the story of the Movement through our own experience. At the end the questions flew thick and fast. "How can we always live with wonder what life brings our way?" and "What do we have to do to follow this method?" and "What is the Meeting?" We tried to answer, but it was useless; every attempt at response opened new windows, brought forth new questions. At the end, presenting Traces, we discovered that they already knew and read our magazine! We then tried to end the meeting (three hours had already passed!) but the last question came: "When are you coming back?"

The first Blessed
Finally, the Puerto Rican community has promoted a public meeting for the imminent beatification of Charlie Rodriguez, Puerto Rico's first Blessed one. Charlie, born in 1918 the second of five children, devoted himself totally to the Church, as a layman. He lived in heroic silence the chronic illness that struck him when he was 13 years old and culminated in cancer in 1963.

Speaking at the meeting were Father Mario Mesa, postulator of the case, a Capuchin father and parish priest, who for more than a year has gone to the San Juan School of Community, and Dr. Norman Maldonado, of the University of Puerto Rico, the doctor responsible for certifying the unexplained healing recognized as a miracle. This was an important occasion for understanding more profoundly Father Giussani's words in the book, L'attrattiva Ges˜ [The Attraction that is Jesus], "Devotion to the saints has a special meaning for the fact that they are contemporary: they remind us that the mystery of Christ is present among us."

A Presence that has no end
What has happened bears the unmistakable resonance of the unexpected which becomes evident before our eyes! Inviting someone to participate in this friendship, I discover in an instant that the other's heart is made just like mine: it has the same hunger for happiness. I realize then that the most adequate position to take in front of the heartfelt "yes" that many say to this friendship can only be wonder. Not as an effort or something that has to be done, but an astonished look at His work. As Father Giussani said some time back at our house, "Don't measure yourselves against the results you obtain but against your love for Christ, renewed every morning in the Angelus."

There is still lots to tell about our life on this Caribbean island, because a Presence that has no end miraculously continues to call people of all ages and in all places to Him. What happened 2,000 years ago continues to happen. The impossible even on the island of enchantment, Puerto Rico!