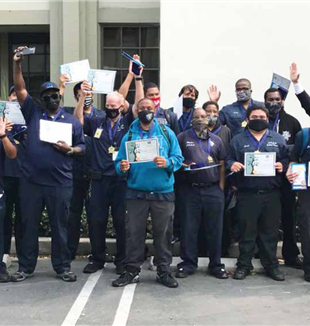 While waiting at the bus stop, Anthony looked at his watch and then at the piece of paper he was holding. “Nancy told me I need to take the one that comes at 11:05. It’s two minutes late. I won’t make it in time!” A few seconds later, the bus pulled up. He and another woman got on the bus at the same time and she looked at him and yelled, “Are you crazy? Do you want to get all of us sick?” Anthony was confused. He looked at the piece of paper again. It said, “Keep your face mask on.” Then it clicked. He pulled out his protective equipment. He breathed a sigh of relief. He had to cross Los Angeles, and there were limited spaces on the bus because of the lockdown, but he found a window seat and could look out on the strange sight of a city slowed down as a result of the pandemic. An hour later, he arrived at his destination, the Harbor Regional Center. As soon as he entered the lobby on the ground floor, Guido greeted him with a smile and said, “Here you are! Right on time. Let’s begin.”

“This is the new detergent you need to use to clean the desks. Wipe the desks twice. Nancy will show you how it’s done.” It’s training time for the janitors at Los Angeles Habilitation House (LAHH), a nonprofit organization. How many times have they repeated those same simple instructions to their twenty employees? “Our ‘guys’ have autism, Down Syndrome, cognitive disabilities, and other learning disabilities,” said Guido. “Any change in the work routine is a problem that makes them anxious. Every time it happens we have to start again, patiently. Since March, we have been training them for two hours once a week and we work side by side with them every day.” Guido Piccarolo, who is Italian, arrived in the US in 1993. In 2008, he and Nancy Albin (both are Memores Domini) started the organization, which creates and oversees job opportunities for veterans and people with disabilities.

When the US also went into lockdown, most offices closed, which meant cleaning services were suspended. Only the institutions considered essential stayed open, like the Coast Guard and family services offices. “The offices of essential businesses are where we offer services. This is how we have managed to keep working while other agencies have lost everything,” explained Nancy. Disinfectants and new cleaning procedures are necessary to keep the virus from spreading. For the first time, Anthony, Stephen, and the others, who fall into a marginalized category, working in the lowliest jobs, have become fundamental. “We are essential. Can you believe it? Our work is essential to keep things running,” said Guido during the training. He said “we,” and little by little, as this story unfolds, it becomes clear what these “guys” mean to him and Nancy.

Offices that have remained open have had to reduce their hours of operation, and as a result, the demand for LAHH’s services has also declined. Fewer hours means less revenue. The logical thing to do in response would be to cut salaries. In America, there is no Redundancy Fund like Italy’s, but for these men, these jobs are their only way to make a living. They decided there would be no cut, that they would continue to receive 100 percent of their salary. “When the pandemic began, we thought we would be out of work,” said Nancy. “But the situation turned out better than we could have ever imagined. We have had new job opportunities. For this reason, our work is motivated by the understanding that because we have received a lot, we also give a lot.” 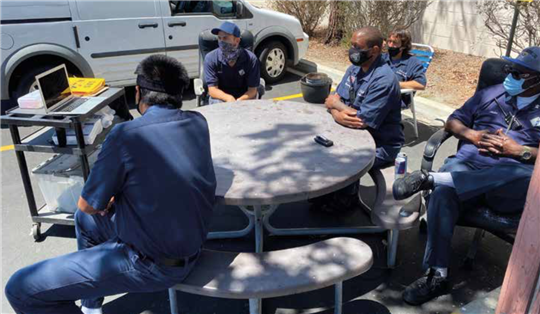 In April, four employees, due to either family reasons or illness, were forced to stay home for a short time. So what could Guido and Nancy do? They decided to put on a uniform, grab a rag and cleaning spray, and take their place. “In front of this unforeseen circumstance, either you panic or you look at it as a sign from God of his presence. When you look at it in this way, you are not alone, you feel freer in front of the circumstances, and you are perhaps also more creative. I am certain that if God has put us here, He will show us how to respond. Without being fatalistic, if we were forced to close, it would be because something better awaits. You just need to have your eyes open to see.” In 2018, John Walker, an entrepreneur and innovator of more effective cleaning methods, asked Guido and Nancy to come one day early to the yearly event he organizes for cleaning companies. It’s not a business conference, just an evening gala with prizes for those who have done an outstanding job cleaning. Walker tells them, “You are the only ones who understand the words that I will repeat to each medal recipient, ‘We appreciate you because every day when you clean, you help us do our jobs.’ You have the humblest personnel, but you have grasped what this initiative is really about. For this reason, I would like you to help my wife from now on with this event.” Nancy and Guido did not know that he was ill. A few months later, they received the news of his passing. Instead of flowers, he requested that donations be made to LAHH.

This year, because of the Covid epidemic, the event cannot be held, but Guido and Nancy still want to honor their team, all of them, now more than ever. Nothing can stop them. At mid-morning on September 9th, the parking lot of the Harbor Regional Center was strangely full. Over one hundred people came in the middle of the work day and were waiting for the start of the appreciation ceremony for LAHH employees, which was being held to acknowledge their work achievements. It was Nancy’s idea, and since it was not possible to hold the ceremony at the headquarters due to a lack of space, they opted to have it in the parking lot and invite all the employees. The LAHH workers stood in a row, excited. They had not expected anything and they were surprised by how many people showed up. This act of taking time off to celebrate the cleaning staff is foreign to the American mentality. When everyone had arrived, Guido explained, “We are here to say thank you for the work that you have done. The Italian word for thank you, ‘grazie,’ comes from the word ‘grace,’ which can also mean blessing. When we say ‘grazie,’ we are telling you that you are a good for me, for Nancy, and for everyone. Now it’s time for the awards. Let’s start with David. Come on up!” Each award recipient received a plaque, a small booklet with all of the workers’ biographies and then... a standing ovation from the crowd. You would think this was their children’s graduation. After the ceremony, everyone got an ice cream from the ice cream truck that came for the celebration, another creative idea. A director of one of the offices where the cleaners work walked over to Nancy with ice cream in hand and asked, “Who are you guys?” They replied, “Nancy and Guido. We are the same people you have always seen, but this time we have done something special. We have the grace to stay with these people who are present in our lives. This is the source of our happiness.”

They went to greet each of the workers, most of whom are African American. The racial protests were raging across America at the time, but they were just a group of men who are happy, brought together not because of their race or because they are “different,” but because they have experienced something good in their work. “I am glad that we couldn’t do this in the office because people were able to get a glimpse of a reality that appreciates life for what it is. They saw hope in action. If it hadn’t been for the managing director’s question, it wouldn’t have dawned on me to do this. It gave me hope,” said Nancy. “We are amazed by everything happening in us and around us,” added Guido. “How is it possible to have a new outlook on things? First, because of Fr. Carrón, who looks at us in this way and directs our gaze toward Another. Carrón’s gaze is what allows us to see and embrace how God presents Himself in daily life, in every detail.”

Steven, Brandon, Michael, and the others, as soon as they are ready, will move on. After all, the idea is to teach them skills and how to work. They mentor them until they find another job. One hundred twenty men have completed this process at LAHH. “But we never lose sight of them. We’re still in touch,” said Guido. The same goes for the veterans. Today, five veterans are employed in San Diego in administrative positions at the Naval Medical Center. Because of what they have seen or done, they carry wounds in their hearts that will never heal. “By teaching them to work, we are also helping them learn to live with their suffering, with the fear and pain that they feel,” explained Nancy.

Elizabeth, who was a Marine in Iraq, was at LAHH from 2013 to 2015. Over these three years, she regained her self-esteem and her faith in her abilities. Finally she got a new job. After six months, she invited Guido and Nancy over for dinner. “I have been told that you are indispensable and that you work well,” remarked Guido. “It’s true, but I miss you two. Lately, I have asked myself why I miss you. In fact, you are my friends and we still see each other. Then it hit me–I miss your heart. No one looks at me in the way you both did, but now I have the same heart. I will be this heart at my job.”

In the fall, Nancy and Guido spent one month in Italy developing some projects they want to implement with their team. “A year ago, we began thinking about a place to make fresh pasta. These plans came to a halt as a result of Covid. Now we hope to get them back on track. In addition to making pasta, we want to produce Italian olive oil... in Los Angeles. We’ll see. We have to look at what reality shows us and follow it.”