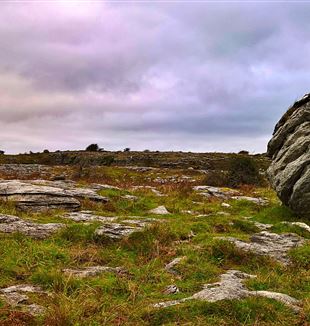 "God can do nothing without our willingness.” These words, pronounced by Julian Carrón at the Beginning Day, are the words of Maria as she relates what has happened to her in the last few months. She said that she had never understood the story of the “man born blind” in the Gospel as she does now that she has regained her “sight.” Speaking from her house in Carlow, Ireland, where she lives with her husband Paul and their two small children, she said that “there are many things in my life that are still not clear to me, but of one thing I am certain: that the darkness that overshadowed me is gone.”

This has not always been her home. In Italy where she was born 34 years ago, she moved frequently. When she was three years old, she was taken away from her parents, who struggled with drug addiction, and then she went through a difficult period of passing through foster homes and orphanages and of living out the consequences of court decisions. This journey seemed to come to an end when she was seven when a family from Ariccia initiated the process to adopt her. “Those were trying times for me and for them. I was a girl full of anger and they already had three children... I made it very difficult for them. But I always saw that they had an incredible tenacity that caused them not to give up on me.” For instance, on the day of her Confirmation, Maria locked herself in her room because she did not want to go. Her mother, after a few attempts, was able to get Maria to open the door. “I remember that she was sitting on my bed and I was already dressed and ready and asked, ‘But who is God? I don’t get it....’ She didn’t explain it to me, and it was then that I began to understand Him. He must be very patient, because nobody forced me to go to my Confirmation on that that day.”

During those turbulent years, there are some images that stand out in her mind more than anything else. The first is the Easter and Christmas posters in the kitchen that kept getting switched out, and the other is a picture on the fridge of Fr. Giussani hugging a friend. “Those faces expressed to me a genuine, definitive encounter.” Maria found the “forever” that she had been missing, in part during her summer vacations in Calabria, where she would spend a few weeks with her family and other families in the movement. “The hikes, the games the nights of singing... It was there that I saw before my eyes the words I read hanging on the walls of my house.” When she was 18, the journey began again. Maria packed her bags and traveled to Ireland. “I wanted to learn English and find a job, but what really pushed me to go was my need to understand who I really was.” In Ireland she moved around a lot and found herself in relationships that made her unhappy. She was not able to find stability at work. She worked as a waitress, then a make-up artist, and then a teacher. The constant thread throughout this period of the discovery of her identity was her parents. Not a day went by without a phone call from Italy, and when she couldn’t go visit them in Ariccia, they would visit her. “After I met Paul and we started a family, they were essential. Even though things were starting to come together, it was not enough.”

When their first son, Michael, was born, Maria began having panic attacks. “Paradoxically, during the time of the greatest stability in my life, all of my fragility emerged. I was afraid that I wouldn’t be a good mother, I felt inadequate.” Her mother stayed with her in Carlow for a long time. One morning, not long before she had to return to Italy, she brought back a small sheet of paper from Mass, a morning prayer that she had found in the church. She said, “Maria, let’s pray this together, let’s offer each day to God even when were are not together, and let’s wait and see what He does.”

“To see” would become an important verb for Maria. “I needed to pray because the things that I saw did not satisfy me. It seemed that the meaning of my life, of the people I loved and the things that I did, would always be fleeting. This need exploded toward the end of 2019, when Matthew, Paul’s brother, passed away suddenly. “He suffered from drug addiction and after a few months of rehab, he came to stay with us so that we could help him get back on his feet.” For her, his death was like a wound that was reopened. She kept saying to herself like a broken record, “You can’t forget where you come from... It’s your curse.”

But not even these thoughts stopped her. Stronger than the pain that she was feeling was a desire to live without despairing. “So one morning I got up, grabbed my phone and went on the CL Facebook page to ask if anyone in the community lived in Ireland. That evening, Mauro contacted me from Dublin and invited me to a meeting.” Maria did not think twice about it in spite of the fact that she had to travel two hours by bus and the weather was dreadful. “I entered that room soaking wet and I did not know anybody. For a second, I felt very uncomfortable. Then Mauro came over to greet me. ‘Welcome! What could there be about this place that dragged you out of your house in this weather?’ I told him I was asking myself the same thing.” After that first meeting, Maria was able to attend just one more – during the pandemic, School of Community takes place over Zoom. “Yet for me there was nothing missing. I would look at the faces of these new friends and listen to what they talked about. I resonated with everything they said. I asked myself, ‘How can these circumstances open my heart to something so beautiful?’”

Read the November issue of Traces

Paul, who is not so happy about these meetings, still can’t help but notice that Maria has changed – she no longer experiences panic attacks. Paul, on the other hand, was full of sadness after Matthew’s death and could no longer believe in God. Then a few weeks ago, he brought home a present for Maria. “I unwrapped it and inside there was a Bible. It was his way of telling me, ‘Keep going on this journey. At least you stay open.’”

Maria feels a great sense of responsibility, but she is not alone. Even her children, whom she worries about, are now becoming companions on the journey. A few nights ago, five- year-old Michael asked her out of the blue, “Do you think that God has finished creating?” Maria took a moment to swallow her food and reflected on the last few months, on the small and big facts that have touched her so profoundly. She replied, “God never stops creating; every day he keeps making a lot of things in the world and in us. He continues to give me many gifts, the most recent one being your question.”