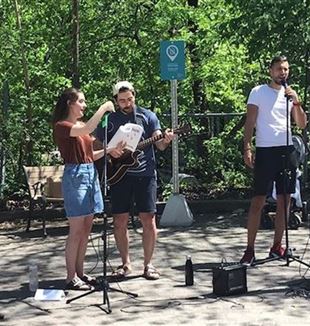 It started with a small “yes.” Héloïse Brindamour, along with the rest of the Montréal Communion and Liberation Choir, received an email from Adélaïde, a friend and fellow choir-member. Adélaïde works at one of many CHSLDs (long-term care facilities) here in Montréal, which have been particularly hard-hit by the COVID-19 pandemic. Adélaïde wrote to propose that the choir participate in an afternoon of singing in the garden of the facility she works at, using microphones so the residents, unable to have visitors for many weeks, could hear the music from their rooms.

When Héloïse received the email, the difficult situation of CHSLD residents was already at the forefront of her thoughts. The terrible conditions of the facilities she had learned about from the news had deeply disturbed her, and she “felt like she wanted to give something.” She even considered giving her time to volunteer in one of these institutions. However, as the mother of a young child, and understanding how taxing this work would be, she recognized that this course of action would not be possible. “I was really sad to realize that my great ideals were not fitting the actual reality of what I was able to do,” says Héloïse.

Heloise did not immediately jump to respond to Adélaïde’s request. However, when Adélaïde called Héloïse, the morning of the day the event was to occur, to tell her specifically “I’d really like you to come,” something changed. “I thought, ‘now I need to go,’” says Héloïse, “She’s asking me, and I can say this small ‘yes,’ this is something I can do.” 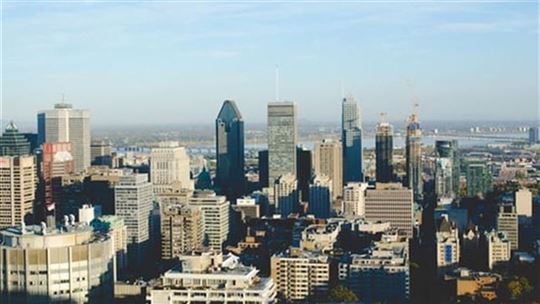 The afternoon of singing was uncomplicated: four friends singing, using tablets or phones to read lyrics, accompanied by a guitar. However, within its simplicity, the gesture clearly carried great significance for the caregivers and residents. “I saw the caregivers and families were happy to have us there,” said Héloïse. In fact, after the friends finished their 45-minute set, a nurse came outside and asked if they could start over. She explained how she had taken each resident and placed them in front of the window specifically so they could hear the music. The process had taken almost a full hour, so some of the residents had missed the singing. Héloïse thought, “Wow, this woman has so much to do, but she took the time to place all of them here, so they could enjoy the music.”

A few days later, Max Zucchi’s wife, Kristina, came to him with a similar proposal. Kristina is a physiotherapist who had been called on to temporarily work in a CHSLD to help compensate for the shortage of staff. Max said she thought “it would be nice to have a few friends come and sing for the [residents] because it was so quiet and lonely for them.” So, Max and three others set up a sound system in the CHSLD’s parking lot and sang everything from Québécois ballads to old-time American country songs up towards the windows of the residence.

Soon, the two groups converged, and began singing at different CHSLD facilities one or two times a week. The apparent “impact” of the singing varied from place to place: “In some of these places, we would barely even see the residents because they probably weren’t able to come up to the windows. In others, caregivers took them outside on the balconies so they could spend time listening to [us] singing,” recounts Max. For him, though, the meaning of the gesture did not lie in quantifying how many residents could hear the music or not: “What was beautiful was to look at my friend’s faces as we were singing, seeing so much joy and happiness. No matter who was there in front of us, it was clear we were doing it for something greater. We have met Someone who has changed our lives, and we wish to share this joy with people, especially those in greater apparent need.”

For Héloïse, the eagerness she felt in participating that first time has faded a bit, but the presence of her friends reminds her why she wanted to go in the first place. “I have to push myself [to go] but in the end, I am always happy I said yes. Each time I go, there is a new friend there. This is also the reason why I want to do it, to stay with my friends.”

When asked how the experience has changed her, Héloïse says it’s helping her to understand what it means to offer herself. “I used to think offering yourself had to be something big or painful, but I’m learning instead that I can offer, little by little, through these small ‘yes’s, like singing at the CHSLD.” Max too, recognizes a depth in the apparently simple gesture: “It seems like nothing special really. But [our singing at the CHSLDs] is in fact a real sign of our belonging to Him.”