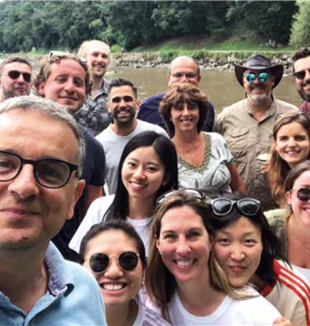 Two years ago, the day he arrived in New York after accepting the position of CIO for Unilever USA, Alessandro Ventura received a call at 9 p.m. He was informed that the company's system that manages distribution had failed. Unilever is a multinational company with dozens of brands in the food, beverage, and personal care sector. Its annual revenue in North America is $9 billion. Every hour the system is down and shipments cannot be made results in millions of dollars of losses. The emergency was resolved three days later at 7 a.m. Anyone would have hoped for a softer landing, but this is the life of a manager with such a high level of responsibility.

Alessandro is 42 years old, from Milan, and has been a Memor Domini since 2005. He first worked for Deutsche Bank in Italy and then, almost by chance, joined Unilever in the United Kingdom. Today, after 17 years, he is CIO of the biggest region in which the company is present and and is part of the North America Leadership Team. Ventura comments, “I have always loved work and I love what I do so I enjoy talking about it when I get the chance. I have always had people coming to me asking for advice, sometimes during crises. Since I have arrived in New York this has happened with greater frequency. I don’t understand exactly why, but when I say that my work and my faith are connected, people are surprised. I tell them that this is true even when I am working to increase the revenue of the company I work for. If Christ wants me where I am, it means that He is asking me to do what I do.” He added, “When I say this, it has in many people the same effect as a champagne bottle popping after being well shaken. There is an explosion of life.”

He continued: “Many find themselves feeling alone, crushed by the weight of challenges. Nobody seems to have the authority to offer a proposal that answers the desires of the heart in the workplace. People do not have someone to look up to as an authoritative figure in the workplace. There are many who have questions. There are graduates who do not know how to write their first resume, young managers faced with the pressures of responsibilities, people who want to have a balance between family and work... People I do not know from all over the US and Europe have begun contacting me.” In the era of WhatsApp, the word spreads at a global level.

“My first sources of authority were my father, a factory worker at Pirelli, and my mother, who worked in a nursing home,” said Alessandro. “They taught me that every job has a dignity and to always give 100 percent.” He learned another lesson during the novitiate for the Memores: “I went to speak with Father Ambrogio Pisoni and told him that I was ambitious, that I wanted to progress in my career, but that I also did not want to lose my vocation by making my work into an idol. I asked him if I should take a step back. His answer was no and that only by living fully my passion for work would I understand who Christ is. This is something that I have slowly begun to understand over the years.” The third life lesson came as a suggestion from a friend in London, who told him about a conversation he had had with Fr. Giussani, who told him, more or less, that “to be a witness for Christ at work you don’t have to walk around carrying a crucifix. Instead, people will ask themselves why you do things differently. Remember, saying yes to your boss can be a way of saying yes to Christ.” These are the three ways Alessandro, and his way of approaching work, have been generated. One of the people who sought him out is a young woman who was studying at MIT in Boston. She had been offered a management position at a big company and was struggling to make a decision. “One day and when I spoke to her, I saw her face light up. When I told her about Father Ambrogio, she said excitedly, ‘This is what I needed to hear.’” Alessandro realized that it would be important to talk about these things these things with more people.

This led to a new endeavor, starting with the promotion of a “professional corner” at the New York Encounter in 2019, an event at the Crossroads Cultural Center, and meetings regularly with a group of friends who share a similar passion. They meet on the Upper West Side of Manhattan to help each other face challenges in the workplace. The most popular topics of discussion in America and around the world are work-life balance and the relationship with bosses. Alessandro explained, “Our desire for fulfilment invests all areas of our lives, including the workplace. If someone says that work is a secondary aspect of life, your heart rebels. This attitude can become an obstacle. Even in the Catholic world we hear people say that we are not defined by work, that it is not the source of our happiness. Surely there is some truth in this. But this cannot lead to a lack of commitment or a cynicism toward work, thinking that the place where we spend the majority of the day has nothing to do with happiness.” So what can be done? How does one find a way out? “People seek a balance: family or vocation on one side and work on the other. In reality, what we seek is a unity between our life and work. Life is one. The heart is one. This unity frees us and it is the reality that needs to be followed even when it may tell us that a job may be incompatible with our vocation. But sometimes even jobs that take you far away from loved ones can present opportunities to deepen memory and love.”

Meanwhile, in relationships with bosses, it is fear that dominates, says Ventura. “In this context, the words of Fr. Giussani on authority from the Beginning Day text are very helpful: authority is the exact opposite of power. Power corresponds to fear, while authority–true authority that generates us as people–frees us from fear. I am in a relationship with someone who generates me now and this helps me sleep at night. From this point of view, my belonging to the Memores is fundamental.” He continued, “I don’t think that the main reason people come to me is because of my position or my career. It is not because of my abilities, either. I believe that they see that unity in my life. That is what they want, even though they may not realize it. Even when people come to me to ask me what they should do, what they really want to understand is the root of the issue and what criteria should be used to make a decision. Most people want to know when they make a sacrifice whether or not there is a promise of something better.”

Ventura related a young Turkish colleague he had met in London and who he had been coaching for a while. He was looking for someone experienced for an important position, and even though she did not have much experience, Ventura decided to offer the position to her. “I talked to her and offered her the position. At first, she thought I was crazy, then she asked for some time to think about it. She later told me that she would accept, not because of the offer itself, but because it was me who had made the offer.” The woman proved herself to be the right fit for the job, but six months later she came back to him in tears and told him she was pregnant. Alessandro smiled and hugged her. “Why are you crying? This is wonderful.” She replied, “I thought I had let you down.” Later, Alessandro announced to his colleagues that he would be spending the next day in another office in London and she told him she would also be there. “She had never wanted to go to that office and had always said she didn’t like being there. But, perhaps when someone senses a different gaze on herself, she wants to see it every day.”