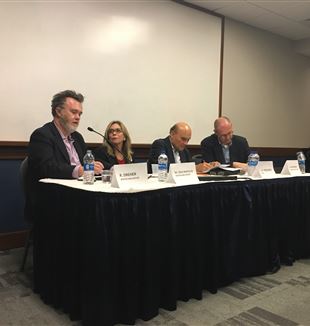 The evening began with Emanuele and Bernadette flourishing violins and bows, entrancing the audience with music. It ended with Alberto Savorana, author of The Life of Luigi Giussani, saying: “The musical introduction to this evening’s book presentation was, for me, a grand gesture of friendship.” Savorana, biographer of the famed Italian priest and educator, linked the beautiful violin performance with an important episode from Giussani’s life: once, as a young priest, he returned to the seminary exhausted from a long and intense day; as a gift, an older priest began playing Beethoven’s fifth sonata in the teachers’ lounge. Giussani called this “the greatest act of friendship I received in my life.”

This lively encounter in Miami was provoked by the recently-published English-language edition of Savorana’s acclaimed biography. “We are here to learn from the life of Luigi Giussani, who was an exceptional witness of Christ. The goal of our discussion tonight is to look for more efficient responses to the questions we have regarding society and the Church,” said psychologist and moderator José Pedro Redondo. His friend, Miriam Cruz-Bustillo, who started attending School of Community with her husband a few years ago, recounted in a spirited and humorous way how she is learning from Giussani and those who follow him. The biography, she explained, is helping her understand how a dear Venezuelan friend is facing, in such an admirable and human way, the excruciating situation in that country. What particularly struck her was Giussani’s observation that faith will vanish if it is not relevant for our structural needs and personal growth. “I am a lawyer, and often have to work in an atmosphere of tension and fighting. The School of Community helps me to take a step back and wonder what I am doing. Who is the other, standing in front of me? Do I treat him as I would treat Christ? In this way the School of Community has become a conversion for me and my husband.”

Then it was Rod Dreher’s turn. He is a writer and journalist best known for The Benedict Option, a book that still enjoys new translations. “I don’t belong to CL,” he explained, “and I am not a Catholic anymore, but I found so many friends in CL!” Growing up in a Protestant area of Louisiana, he found himself an atheist at the age of fifteen. Two years later, while on a trip to Europe, he walked into Chartres Cathedral. The architecture, sculptures, and stained-glass windows had an overwhelming impact on him. “I encountered the awesomeness of God in all this; from that moment on I knew that God existed.” Another significant episode in his life was his interview of a ninety-two-year-old priest in Baton Rouge. The priest told Dreher that he, too, had been an atheist, fully engaged in society, working as an engineer. When the priest then recounted the episode of his own conversion, he suddenly started to cry tears of joy. “These events were, for me, signs that pointed to Jesus; they were presences charged with a message,” Dreher told the audience. “Still, I understood that the conversion moment is only the beginning. We need to follow an authority to deepen this moment and to learn more. In the words of Giussani: we have to become disciples of a teacher.”

Finally, the biographer himself distilled from the speakers’ contributions the two most important points of Giussani’s legacy: an answer to the big problem of modernity that has separated faith from daily life, and a response to human needs. Giussani, following his teachers in the seminary of Venegono, discovered Christ as the presence that corresponds to our needs, like a beautiful day, like being struck by the beauty of a cathedral, or the deep emotion of a person remembering his conversion. Furthermore, during the student revolts of the ‘60s and ‘70s, which constituted in Italy a true epochal change, the past, tradition, authority, and the Church were discarded in the name of the authenticity the youth were looking for. Many young people who had been following Giussani left the Church. Giussani then understood the signs of the times: tradition, authority, morals, and theology are incapable of moving people; only a presence can accomplish that—a presence charged with a message. Giussani told the worried students who were still with him: “You cannot expect to solve the contradictions in a university with your own capacity; you can only communicate what you are already living. You should not try to convince people but rather stand in front of them in daily life, sharing your life with them.”

“I was recently in Venezuela,” said Savorana, “where I saw poor people in very difficult circumstances. But they lived this encounter with a Presence charged with a message, and this makes them happy, right now. Living this presence is the answer to our current situation as well.”

Redondo thanked the speakers and musicians, then pointed out that in the audience were friends from as far away as Gainesville, Pensacola, and even Argentina; some of the stateside audience members had traveled eleven hours by car. What happened this evening—including the joyful after-party—was once again a sign of His surprising, unforeseeable Presence, showing that we really have everything we need to live life fully.#LifeLuigiGiussani