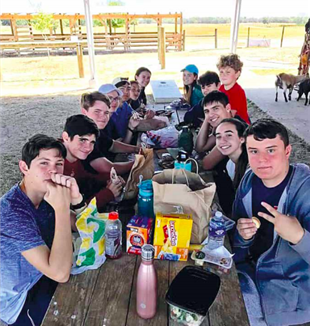 At 7:00 a.m., the light of the sun is already spilling into the classrooms of St. Brendan High School. Outside, though it is mid-November, the first students arrive in their cotton uniforms with short sleeves, a sign of Miami’s eternal summer, with temperatures that rarely dip below 70°F. The school opens at 7:00, ready to welcome students onto the 33-acre campus made up of classrooms; football, baseball, and soccer fields; tennis courts; a pool; science labs; and a theater. On the first floor of the main building, you find room D104. It belongs to Miriam Smith, a theology teacher. Lining the floors of the hallway each morning are rows of students with earbuds in, waiting for her. Her classroom has become a place to stop in before the first bell rings. At first, it was just a few of them, but word spread that the door was open to everyone. A few started to ask Mrs. Smith for a little help with homework or to talk about their struggles and share their big questions. Thus began the GS group in Miami, which has grown over the last year. Today it is made up of about 40 students who return to room D104 every Monday afternoon for School of Community. The meeting is a solid half hour of dialogue in which participants pose their most pressing questions. “Even though afternoons here are packed with school activities between clubs, sports, and fine arts,” says Smith, who has spent 20 of her 49 years of life teaching at St. Brendan, “this is something new that the students don’t want to miss.” A small incident helped her understand this. “During one of these Monday meetings, I realized there was a girl studying for the next day. I thought, ‘How rude! There is no point in her staying here, if she doesn’t really want it.’” Undecided about how to respond, she told a friend about the episode. His answer blew her away, “That girl is really something! She must have so many things to get done, but still wants to spend time with all of you. Something is keeping her there, something that is greater than everything else.”

This was more or less the same thing that happened to Miriam when she met the Movement in 2008. She had replied to an email from a colleague, the head of the program for international students, asking if any of the teachers would be available to drive two Italian girls to school and back. “I volunteered because my husband was planning a trip for us to Italy and I thought it would be interesting to meet them. I never could have imagined that such an simple act could change our lives,” she said. One ride at a time, the relationship intensified and began to involve Miriam’s children as well. One day, one of the Italians invited Miriam’s family to her 18th birthday party. Miriam was perplexed. She knew how teenage parties were. She decided to stop in just to say happy birthday and drop off a present. Instead, she stayed all evening. “I had never seen a party like that. Singing, games, and dinner together. Then, a prayer before everyone went home. There, for the first time, I understood that we were in front of something completely new.” The next year, two more Italian students from the Movement came to the school. She volunteered to drive them, too. They asked even more of her: “Could we use your classroom for an afternoon meeting?” Miriam discovered School of Community. “The students started meeting along with classmates they invited and one of my colleagues they asked to lead them. I stayed in the classroom, getting things done,” Miriam remembers, “but I listened to everything they were saying and it seemed impossible to me that 16-year-old boys could speak so profoundly. I remember how each time, driving home, I would say to myself, ‘Faith is something that changes every day for them. What is it for me?’” 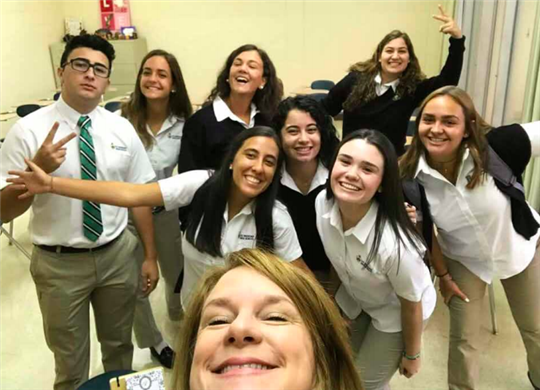 Miriam started to participate in the meetings. She became friends with Desa, the Italian teacher who helped the students. She started reading Giussani and going to events with the adult CL community in Miami. “Suddenly, Christ was no longer something present but that’s it; He became a person I could live with,” she said. In 2012, Miriam found herself alone again. Desa had moved to another city. “I asked myself, ‘And now who will help this little GS group?’” Enrico, a friend from the local community, said to her, “You take over. Be yourself, take a risk.” Miriam threw herself into the new adventure but was laden with anxiety. She wanted to make sure to do things right. “I repeated all the same gestures in a formal way. I had asked a friend from New York to tell me about all their GS initiatives so that I could do the same.” Her biggest fear was related to the presence of the Italian students. “I realized that those who came to School of Community were attracted by their somewhat ‘exotic’ presence. I was sure that once the Italians went home, there would not be anyone left here.” Miriam spoke of this to Fr. José Medina, the national leader for CL in the U.S., who told her, “Follow the life of your students. Start there, with what is happening to them and with them.” “For me, GS started in that moment,” Miriam remembers. It did not matter that it was small and that different people came each week. “One Monday to the next we could have five or fifteen, and there were even a few times no one showed up. But our time together turned more and more into a friendship in which I followed them with a desire to get to know them, and they started to follow me.” Last winter, Miriam decided to organize a short vacation without joining up with another GS community. “It was a problem of cost and distance, so I decided to take a risk, proposing that we go camping at my sister’s ranch in northern Florida.” They made flyers to hang around the school. Twenty people signed up. “I asked for help from many of the adults in the community. They helped me with the food, hikes, and singing. Everything was going well until a thunderstorm hit, blowing over all the tents and turning the field where we were supposed to sleep into a giant swamp.” They decided to divide the students between buses and cars for sleeping on the last night. “I was panicking; I kept thinking maybe it would be better to go home,” Miriam said. One student noticed and asked, “Mrs. Smith, why are you so stressed? Look, we’re all fine. We’re happy. And tonight we will have our bonfire.” And that’s what they did. After singing and dancing, Miriam invited them to speak about their experience on the vacation. Julian, who had come for the first time, jumped up. “I thought it was going to be a really ‘Jesus-y’ thing,” he said. “I thought we would pray the whole time. Instead, I had a ton of fun. And I even made some friends. Still, even though it wasn’t a ‘Jesus-y’ thing, it seems like Jesus has been here the whole time with us. He’s like this fire–something that draws us in and holds us together no matter how different we are.”

After that vacation, things went viral at school. Many of their classmates wanted to come and see what this “GS” was. The students worked to organize the School of Community as much as possible. They used the school’s app to send out announcements and an agenda. Each week, they began with a part of Fr. Giussani’s life taken from an exhibit put together by American college students. They started wanting to sing, too. They sent around the words to the song “Be Still My Heart,” by Jacqui Treco. One freshman girl overcame her shyness and brought her guitar. Miriam watched and let them proceed. She did not want to burden them with issues of technique–“It’s beautiful that they have realized the importance of singing together.” At the end of August, the beginning of the new school year, they ran out of chairs in Mrs. Smith’s classroom. “I have 30,” she explained, “but at the first School of Community, there were students on the floor and standing, leaning against the walls. I kept asking myself, ‘What is happening here?’” It’s the same question the parents of many GS students are asking. A few months ago, Sofia’s mother asked to meet with Miriam. She was having serious issues with the family she left behind in Venezuela and wanted to talk to her about it. “Mrs. Smith, my daughter is so happy when she talks about you, and I want to be that happy, too,” the mother admitted before starting to describe her struggles. “As she was speaking to me,” Miriam said, “I realized that I could not help her; I had no solutions to offer her. But the words of Fr. José from a few years back came to mind and I thought, ‘Stay with her, just stay with her.’” Other parents also wanted to get involved. “They asked me, ‘Who is Giussani? Who is Carrón?’ So last October, when Fr. Medina came to Miami to meet the students, I invited the parents to join us for Mass and dinner together.” It all took place at scenic Crandon Park, a nature reserve on the shore of the Atlantic. Elise, who is a senior, talked about how, when she went to visit colleges, she asked the various schools if they had a CLU, the group for college students in CL. She was upset that not one of them had any idea what she was talking about. Sofia is also about to graduate. She too is anxious about choosing a college. Her grades are high and she could choose the best, “but could I lose what I have met?” she asked Fr. José, full of urgency. “Sofia, did you generate that encounter, or is it something that happened to you? Could you have just imagined it for yourself?” he replied. At dinner, Sofia sat with the other seniors. They promised each other that, no matter where they are, they will meet up next June for the CLU vacation in Colorado. She is no longer afraid of losing anything. All she can think of are the words of “Be Still My Heart”: “But if you stand still / you’ll never know / why you burn at all.”