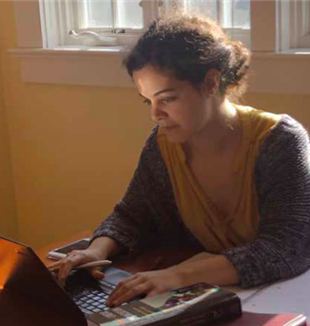 End of September: on the bulletin boards of the Massachusetts Institute of Technology (MIT) campus in Boston, among announcements and other informational flyers, students of one of the most prestigious universities in the world could find a flyer with the image of the Blossoming Almond Tree by Van Gogh and the question, “What do I live for?” And below, a few words inviting all to meet in private dining room #3 “to take a moment to talk about what matters in our lives. An Italian dinner will be served.” At the very bottom, there was an email address. It belongs to Elisa Piscitelli, who graduated from the Polytechnic University of Milan and arrived in Boston on August 25th to study Business Analytics, sponsored by the firm she works for. A few weeks prior, during School of Community, Fr. José Medina, the leader of Communion and Liberation in the U.S., while speaking about the tensions and problems in the Catholic Church in America, made a proposal: “Let us try to recognize Christ in our daily lives.” Those words became a new provocation for Elisa. “Some questions have echoed in my mind: What is it worth living life for? What use is it to gain the whole world while losing myself? MIT is an extremely competitive environment, where many hours are dedicated to studying and the risk is, in fact, to ‘lose oneself.’ This is relevant for my life and that of other students.” Elisa said: “One could try to pause to try to answer those questions. But how? I still had no idea.”

The first people Elisa makes the proposal to are the 44 students in her degree program. On Tuesday, five people come: Lorenzo, a friend of the community who wanted to participate, and then three of her classmates. One came because, “If you are alone at the first meeting, I would feel bad. Maybe you would feel disappointed.” Another came because “it’s incredible for you to start something like this, but we needed it.” After the group ate lasagna, Elisa began: “I wanted to talk to you about a priest and to read a few pages of his book, which is very important to me, and which can help answer the question...” “Wait a second,” Lorenzo interrupted: “Instead, what if each of us thinks of something beautiful–that we have read, seen, or listened to–to present to the rest of the group?” Elisa took a moment to think, then she put away The Religious Sense and said: “You’re right. If everyone agrees, next Tuesday I will bring you the video of a friend of mine. Unless someone has another idea.” Everyone agreed. As people were leaving, Elisa approached them: “Thank you, my idea was kind of imposed from on high. In this context, it did not fit.” The following Tuesday, the screening of the video witness of Enzo Piccinini, a surgeon from Modena, a leader of the Movement who passed away in 1999, was attended by ten people. Once the monitor was turned off, the first one to react was one of Elisa’s classmates, the only Catholic in the group: “I was struck that Enzo speaks of Christianity as a presence. Meaning Christ right now, someone I can have a relationship with. For me, Christianity has always been about following laws that were just, moral, and true; in other words, a good doctrine.” Then, before leaving, he asked Elisa, “Could you let me borrow one of Giussani’s books?”

The “Italian” Tuesdays continued. The numbers grew by word of mouth. Even the chaplain of the university came to a meeting. One evening, one woman proposed a lecture on a piece she would play on the violin. After the performance she explained: “I often fill my days with things to do to hide the sadness that I feel. Music, though, helps me understand myself to the core. I think that happiness is not external, but it is within me.” “Give us an example.” “Knowing that I am alive.” “That happens to me too: I come home in silence and I say to myself: ‘Wow, I am alive! And this fills me with gratitude.’” Elisa listened with amazement. One night, as she was putting away the food containers, one woman approached her: “I wanted to tell you that I am really happy, which is something new for me. If you want, I can cook next time. It won’t be Italian, but I really want to make something.”

They only began meeting two months ago, and some are non-believers, but something has changed since October 8. When they run into each other in the hallway, they stop to say hello. They study together. “This is not normal at MIT. They say it is best not to have contact with others from the academic point of view because of the competition, but more generally because it is a waste of time. Instead, in those meetings, a friendship has been born that stays with you, it remains in the back of your mind and transforms your everyday life,” explained Elisa. In mid-November, the meeting fell during a very intense study week. One by one people replied that they could not come. Then she received a message on her phone: “I’ll be there.” That was enough for Elisa to plan for the evening. At 7:00 p.m., in private dining room #3, four were gathered to watch a video of a talk by Steve Jobs titled, Stay Hungry. Stay Foolish. At the end, someone who had come for the first time exclaimed: “I want to invite all my friends!” When the video of the Beginning Day ended, Elisa thought of the Tuesday night group. “Here was the announcement that ‘cannot be reduced to the past,’ as Giussani says. It changed me and now it is touching the lives of these new friends.” Some days ago, Elisa received this email from someone in the university’s administrative offices: “Even though I am not a student, can I still come to your meetings?”