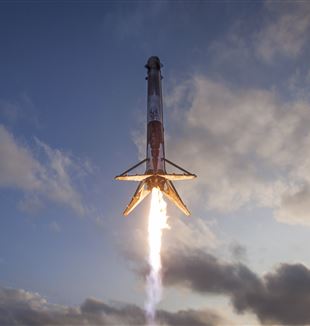 In the eighth grade, Mauro Prina had a passion for typewriters. He was fascinated by their mechanical workings, and he used this kind of fascination to direct his work in school into something clear, precise, and ordered. He decided to enroll in a high school with an emphasis on technology because an acquaintance told him that “computers are like really powerful typewriters.” Back then, in 1984, he never imagined that this passion would lead him from Baceno, the little Italian town north of Lago Maggiore where he lived, to Los Angeles, where he became the Thermal Dynamics Director for SpaceX, the company founded in 2002 by Elon Musk, the chief executive of Tesla Motors and one of the most famous people (and sharpest minds) in Silicon Valley, where he could build spacecraft to carry people and objects into orbit. His objective was simple: to make travel to Mars possible. In 1996, after Mauro graduated with a degree in mechanical engineering, the astrophysics professor Marco Bersanelli proposed that he go to Pasadena to NASA’s Jet Propulsion Laboratory to study the cooling systems for the Planck satellite, a project he was overseeing. “Over the years, a vocational choice was maturing in me, one of total dedication, and Guido, a Memor Domini who had recently moved to Los Angeles, had asked for someone to join him there,” Mauro said. “Bersanelli was a dear friend, a person I could trust. Plus, I was very impressed by the American method of investigation I had encountered a few years before at the University of Chicago. Basically, these were all signs it seemed the Lord was putting in front of me. I accepted, and most importantly, the professor I was working with supported my desire to follow these signs.”

His work in Pasadena was focused for two years on designing a switch. “I chose that detail because, within the team of people working on it, I found one who knows the material really well. I knew I could learn from him.” At a certain point, they ran into a problem with a soldered joint between pieces. “The technician who worked alongside me and I began to ask other people about it. Each of them added a new element toward understanding the issue. For me, at the heart of it all is a curiosity toward reality. When I encountered Christianity, I found myself opened up even more to reality. I wanted to discover the places the Mystery makes himself present and comes to meet me. Knowledge, then, becomes an adventure even when it’s about a detail as small as a switch. Therefore, in the face of a problem, the first questions are: ‘Do I know everything? What is missing? What does what I learned today tell me?’ In dialogue with everyone, you gather all the inputs and start to follow a path, one that is not predetermined and often is not linear. In fact, they sometimes seem to lead you astray. It is like when you are driving and think you have taken a wrong turn but find yourself in a really beautiful place that you otherwise would not have seen. That is how we found the solution for the joint, and discovered something new in the process.”

After his work on the switch NASA offered him a contract, and Mauro began dedicating his time to designing a compressor. His areas of competence widened so much that he was the one to sign off, as project director, on the technical documentation for the entire cooling system installed on the rocket. Once that project was finished, it was time to work on the cooling system for the space rover designed for Mars, later named “Curiosity.” In particular, he worked on the valves that would maintain the temperature. How should they work? “The solution was in the shower.” Which means? “I thought of the valves that maintain the temperature in the shower even when you turn on hot water in another faucet. We did not do anything more than adapt these valves for the rover. If you stay glued to the technical data, as has happened to some of my colleagues who have a materialistic view of life, you cannot pick up on that extra aspect reality is trying to tell you about. You cannot really know, cannot see all the connections.”

In 2007, Mauro decided to change jobs, because the rhythm of the project development at NASA was too slow for him. In the course of a single day, he interviewed with and was hired by SpaceX. For many, it was a visionary startup, for others a fool’s dream. “I was fascinated by this idea underlying the whole project, that our human consciousness surpasses the geographic limits of earth. I had this desire to make a contribution toward advancing the history of the world.” The first successful launch of a rocket was in 2007, but Musk then posed a new challenge for his 300 employees: to make it a sustainable project, the rocket had to more than just launch, it had to return, just as a ship or a plane does. They had been considering the mechanics at NASA for 40 years, but at SpaceX, the steps progress much more quickly. They try, make changes, and learn from their mistakes.

In 2015, the first stage of the Falcon 9 rocket, after going into orbit, landed on the launch site. It was the first time that a rocket carried a satellite into orbit and returned to its base. But there is still a long way to go. “It was clear that we were setting out to do something that had never been done before. Not knowing what to expect, you need to share your knowledge of the data with your colleagues on the team. This is because they look at the same thing and see aspects that, though they are right in front of your eyes, you do not recognize. When you desire to know, you are not afraid of making mistakes, asking for help, or taking risks. Those lacking this curiosity for knowledge gradually find themselves out on the margins, as I have seen happen to me when I remain stuck on what I think I already know. And in those cases, it is just a matter of time before you find yourself out of the game.”

This summer, SpaceX sold its first ticket to outer space. Yusaku Maezawa, a Japanese businessman, bought a trip around the moon for a group of artists, with the aim of seeing what this might inspire them to create. Mauro was blown away by the news, but his colleagues did not understand why he was so happy. He explained, “Don’t you see that it’s someone spending a lot of money so that other people can be inspired to created something beautiful? The fact a person like that exists says something about the greatness of humanity, what it aspires to.”

To work on a project like this requires total commitment, yet that is not enough by itself. Difficulties come up, and sometimes your initial motivation of being able to collaborate on a great achievement, grows weak. Two of the colleagues Mauro had hired quit, telling him, “We want to move on so we can recover that motivation. We would like to live with the zeal you still have.” Mauro said, “I still have that zeal because, insofar as I can be aware, I want to discover what is new in every day. For that, I need the Lord to make Himself present, that He come to meet me: in Morning Prayer, at work, in my relationships.” One day, one of his bosses asked him, “Where do you get this zeal for knowledge? Many other people have lost it.” Mauro told him about his life. At the end of this description he said, “In a few days, I am going back to Italy to see my friends. Back where it all began.” His boss replied, “Okay, I’ll come with you.”