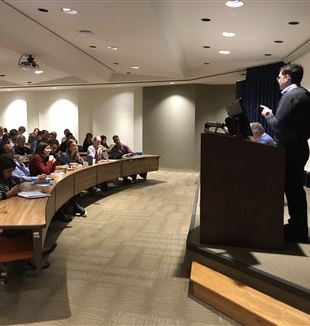 After thirty years, what does one expect from an encounter with a group of people on a Thursday night in New York late in 1990, in the basement of St. Patrick’s Cathedral? There are the memories, or nostalgia for the key moments: moving from Harlem into Brooklyn, where a rotation of four men, for better or worse, lived out their days as bachelors into their thirties, then the arrival of an “official” visitor from Italy, Vittadini, known as Vitta to his friends, two houses of Memores Domini, GS, then CLU. Then moving to D.C. for a professor’s job, another house.

These are the common vicissitudes of life for those of us who’ve brushed up against Luigi Giussani. None of them, however, answer the question of why we've stayed here for thirty years. You can say, “Christ is present in all this, I want to be faithful,” or, “What I met was beautiful,” but in the years that pass, these things can take on the same ilk as high school memories, things you recall with a fondness that lose their weight of persuasiveness in giving you a reason to get out of bed in 2018.

On November 3-4, the National Equipe for Educators took place in Washington, D.C. Led by Fr. Medina and Vittadini, the bulk of the work focused on what it means to have met the charism of Giussani and how that plays out in the life of somebody who spends most of his time in a classroom, meeting young people—and for some of us, not so young—and introducing them to the meaning of life.

The morning began when professor Saltamacchia introduced Greg Lukianoff’s book, The Coddling of the American Mind, citing how across the board, universities have become places where the culture of “trigger warnings” has begun to bottom out. “Researchers understood,” Saltamacchia explained, “that the mania over peanut allergies has done the opposite of what it was intended to do: it produced generations of children with no immune response.” Peanut allergies, therefore, is meant as a metaphor for the emotional and metaphysical allergies students across the United States have adopted in front of the culture they live in, by which I mean the idea that the university become what popular nomenclature calls “safe spaces,” where nothing offensive against culture, race, gender, sexual preference, you name it, be allowed to surface as a way of protecting students from adversarial situations, as a way of fostering identity politics.

The situation brings to mind Arthur Miller’s The Crucible, which dramatizes the result of hysteria based on ideology during the infamous Salem witch trials, or on a lighter note, Hawthorne’s The Scarlet Letter, which points toward Catholicism, in the end, as the antidote to the Puritan attempt to build the city on the hill Jonathan Edwards wrote of, a culture where “perfect” Christianity dominates and leaves people who don’t ascribe to its dictums at best living in hovels by themselves away from the community, and at worst, hanging from public nooses. Only the “perfect” Christianity now, from the legacy of Jonathan Edwards and Cotton Mather and all our Puritan friends, is a set of neo-Kantian moral rules that have to do more with protecting personal interests that have come to be known as morals, than with looking at the mystery of a God who becomes flesh in reality—something that requires—irony of all American ironies—freedom. 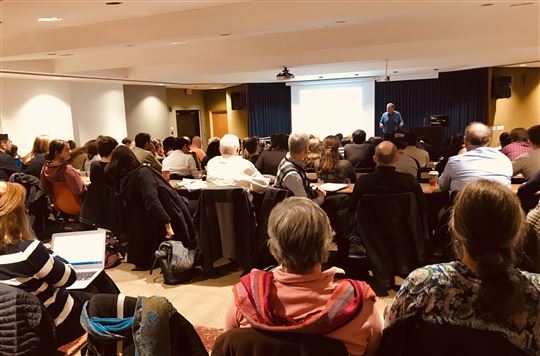 It was the question of freedom, more than anything else, that dominated the weekend’s discussion. Fr. Medina quoted Giussani, who said we must “divest Christianity from its trappings in order to let it speak to the heart.” It goes without saying that in 2018, even the Church that has remained faithful to the tradition of the Apostles has shown itself guilty of basing its stance in front of reality on ideology rather than an event that sparks an encounter. What is it then, that makes people free? Fr. Medina asked. The idea of a person who, in Giussani’s terms, is “ a free relationship with the infinite.” The sense that the Church is a good if and only if it facilitates freedom in me, that is, if it helps me stay in front of the reality of a living God active in my experience, the relationship with whom frees me from everything—including the Church’s crimes.

Perhaps most striking throughout the day was Vittadini’s presentation on Nobel prize-winning economist James Heckman's work that pointed to the fact that the traditional American mindset of a “standardized test” culture that was set up to create a meritocracy from the beginning, has been well on its way to crumbling for decades now. Heckman has demonstrated in his research on the GNP that those cultures that educate to the more human values, first and foremost educating the whole person above and beyond mere cognitive values--helping the person make a link between what he is learning and his fundamental needs--ironically end up producing more productive individuals. I could not help thinking of the push on campuses everywhere to promote diversity and inclusion as a way of rectifying the hierarchy of affluence, and how this has happened to begin with due to the legacy of the Puritan mindset, filtered through Kantian values, that is more or less unconsciously entrenched in our education system. When education does not address the fundamental needs of the person, like the Puritans who broke off from the historical continuity of the Christian event, we grasp something—our own arbitrary moral codes—to anchor us in what we need for a god. Nobody wants to admit we are not egalitarian in practice, that we espouse a culture that is entrenched in hierarchy and meritocracy and that now, to assuage its guilt, has begun to admit that it’s time for those on the bottom be given a place at the table. Heckman's discovery that addressing the complete needs of the person is something that Giussani's method of education has insisted on from the outset. Both Vittadini's and Fr. Medina's final provocations had profound ramifications: that to live out these ideals was not a matter of espousing Giussani's ideas, but a matter of entering reality with the expectation of something, the search for the connection between what is in front of us and our own needs, as a way of discovering, together with our students, truth in reality.

I came away from the meetings this weekend thinking I was right in being attached to what I saw at the beginning that night at St. Pat’s: that what Giussani proposed to the original people who met him was the radicality of the relationship with Christ through the truth and beauty of things we have in front of us. This is what freedom means for the person, and what, in Fr. Medina's words, we are called to produce in our students: free individuals who have a relationship to the truth above and beyond us. The test of a true friendship, a vocation, any person or thing we love, is that it help us be free by engaging us in reality in all of its aspects—especially the part we cannot physically see that is most crucial to us--the needs for love, truth, justice; this is the only hope there is, and it lives inside of us, because the heart we’re born with is infallible.