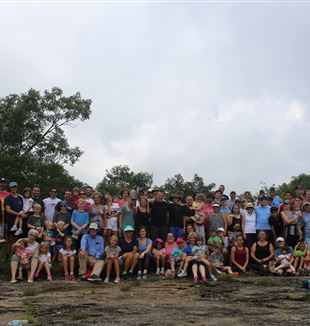 Salvation is concerned with concrete times and places, people with names and last names and stories. More than a hundred such people from the Southeast United States (the Carolinas, Georgia, Florida, Alabama, Kentucky, and one from Texas) gathered at the base of the Appalachian Trail in Georgia for four days in July. Not a single person knew everyone, and many came, even bringing their families, knowing only one or two people. There were nearly forty kids under the age of 14, seven belonging to one family, and by the end of vacation it was normal to have a child whom you had never met attached to your leg, asking the nearest person with help tying a shoe, or so much at home that she gave every single person a hug before leaving. Matt, who knew just a handful of people, came for one day, broke his collarbone within 15 minutes of arriving, and said at the assembly, “I don’t know much about what this is, but here people really care for me.” Some, like Olivetta, have been following the Movement for fifty years, others were introduced to Fr. Giussani in the car on the way by reading chapters 7 and 22 from the biography, the proposed work for our time together. We were packed into cabins; people introduced themselves to their housemates on the threshold, and a group of girls stayed twenty minutes away to make room for a family who decided to come at the last minute. We cooked, ate all our meals, had Mass, prayed the hours, listened to presentations, and sang together in the beautiful lodge at the base of the hill. We hiked, swam, and played games all together from the youngest (ten months) to the oldest (friends in their seventies). For four days we lived out the great expectation with which everyone arrived. This expectation, born from the surprise of last year’s vacation and all that has been happening with us this year, jumped from person to person like wildfire in the weeks preceding our arrival. Desa, responsible for the room assignments, was most struck by his own freedom and enthusiasm to call up friends, even a few days before, and invite them to be with us. Up until the day we arrived in the Georgia mountains, we were registering people who had been told, or finally convinced, by their friends to come and see. 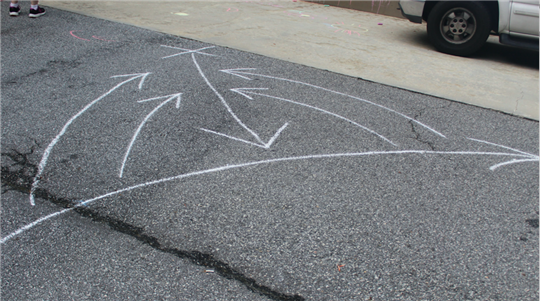 Our communities came to Georgia with all of our brokenness and all our difficulties, and therefore with our eyes wide open, and we began the days begging that He come and find us again, that reality wound us with this fascination that demands an answer: is it Christ or chance? Each day began with witnesses who recounted to us facts from the year that helped them know the Lord better, facts as seemingly small as a conversation on an airplane, a kid showing up to GS just to do her homework, or the impact of a few friends who make work in a cubicle interesting because it is the place where her freedom moves. These facts, in front of which they could not cheat, invited us to watch the same dynamic play out in our days together: adhering to what is proposed with a heart full of the expectation that brought us in the first place. In that position we saw everywhere small traces of an emerging humanity, signs of the unity among us, of "Christ in disguise," as Olivetta said in her witness. There was Josie, a girl who courageously set off on the hike, despite her failing eyesight, holding tight to her brother's hand and heading down the mountain laughing with the rest of her siblings, all of them perfectly happy to be in Luca's care. Seeing an opportunity and following their friends, the group from Tallahassee found themselves in the kitchen pulling 100 pounds of pork; some hands worked fast, full of the urgency of many hungry people, while Will slid in and out of every space around the counter sampling the skin and generally getting underfoot. In the evenings, the back porch was a cloud of cigarette smoke which hung over pockets of conversation, intense games of Italian Go Fish between Olivetta and her stiff competition of little girls, and Fr. Branson dealing a raucous game of Texas Hold 'Em. The kids' songs, led by a tone deaf Navy helicopter pilot and her brother who was a brand new friend, were met by the delighted and enraptured faces of the little and not-so-little ones, culminating in Brian leading a most memorable rendition of Ram Sam Sam. Those same children were so much a part of all the happenings that throughout the day you could hear their peals of laughter and see them gathered in any open space playing games organized on the spot by Carmen and Andres, or so at home that their presence in the back of the lodge made it nearly impossible to hear the Mass, but it wasn't an obstacle to Him coming among us. These snapshots, moments we saw and cannot erase, found a correspondence in one friend's contribution to the assembly (he brought his family back from Italy to meet his friends at vacation) when he said, "I am really grateful that I came all the way here to discover that my heart is not dead."

Four days in the Georgia mountains, where, says Luca, "in a very little time I can actually know someone at the level of my need," all these people plucked from every facet of life came to follow and stay with the fascination that made them look up. Rachel captured everyone's longing in saying, "I don't want all this beauty to end," and in the assembly, Martino asked, "In front of this beauty that I can't categorize, how do I not lose this?" It was a question we were invited to keep, one full of hope because with a heart alive, as we discovered in these days, we can "follow hints of humanity" without worrying about "imposing forms that generate those hints," as our friend Desa said. These friendships--people with whom you can laugh, fight, talk, eat--"point me to Christ [in the form of] an attraction that I can't deny ... I've encountered something that I have to put a name to," said Eddie, and so those beautiful days of vacation contain in them a promise for the whole year.