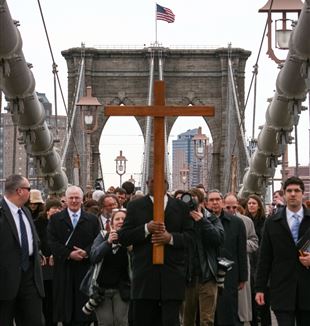 This year, we had our twenty-third Way of the Cross in New York. In the beginning, about thirty people would attend, and now the norm is about two-thousand people. Clearly, they are not us because our community is of about 250 people. All of the community works the Way of the Cross, for example, we have people holding speakers on the bridge to keep them from blowing over, etc. Trying to move two-thousand people is not a small event. This is not to say that we're heroic, it's just to say that we're not the congregation of the Way of the Cross; We're not the audience.

Over the years, we saw these people who were not us and we started asking, “What are they getting out of it? Why are they there?”

A couple years ago, we asked if we could poll the parishes because ever year we send them cards and posters they can put up announcing the Way of the Cross. We decided to make a phone call and see if these things were useful or if they just got thrown in the trash. One of the secretaries in one of the parishes said, "We love you guys! Yes, keep sending it! Every year my kids and I look out the windows waiting for you to pass."

We eventually also started seeing these black dolls on a cross at the Way of the Cross. It's a Filipino tradition of the Black Jesus of the Nazarene. People bring their own crucifixes to our Way of the Cross, and they hold them up and march with them. It has become theirs. This year, for the first time, a group was praying the rosary as they were walking. It wasn't instigated by us and we were also thinking, “Perhaps, pay attention to what's happening,” but it's also beautiful that it became theirs.

The choir has also been a place where we always invite non-CL people. There is always a need for men in the choir and this girl who is not in CL, for example, asked her boyfriend and her friends to join. The choir evermore has become a CL choir of non-CL people. About ten percent of those involved are not in CL, which is beautiful. During the Way of the Cross, when we get to one of the stations in City Hall Park, it's the most beautiful station; you can see the New York tour buses go by and you look at all these faces and there are people of different ethnicities and from different backgrounds, and you think, they're not us and yet, they're here. How can we pull them in more? By the way, after all these years, they started singing along with the choral pieces, because the words are always printed in the booklets. So, they're attempting at all costs to enter in, and we have included a few Spanish choral pieces because of that.

Frank Simmonds—a black man from New York who is a saint and who died a few years ago—used to carry the cross. The first year he did, you would see people’s eyes bugging out. It was because for a black person to be carrying the cross was so important for a whole segment of society. There's a beautiful story that many probably know. One year, as he was carrying the cross, he heard someone yelling his name—Frank had had a terrible drug story—and it turned out to be an ex-drug-addict who had shared a box with him on the street in the winter when Frank was homeless. This guy had also cleaned up his life. Anyway, there are all these great stories.

We've been trying to push to get other people involved, so we asked Fr. Rich if he had any parishioners who could read instead of just us being the readers. He sent us a seventy-five-year-old woman from Ghana who now reads the Péguy "She wept, she wept" passage. It's very dramatic and very beautiful. We have a Lebanese woman from my parish who also reads.

I'm always amazed, too, at what New York City does for us. We have whole police escorts and it's been the same guys for the last twenty years. The Way of the Cross has become theirs. We are always pretty much kissing their hands. They are stopping traffic as we are going into Wall Street, and they are completely with us.

So, again, it's amazing to me that the Way of the Cross has become part of Good Friday culture for the police, for the homeless people, for these non-CL people, for the secretaries in the parishes. It's part of their lives now.