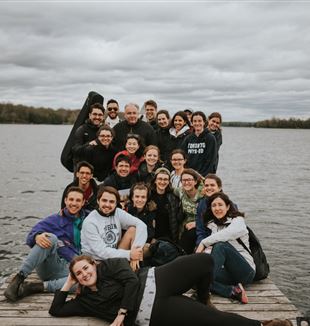 From the first moment we arrived, this year’s CLU vacation felt different from the previous ones I had attended. Not only were we staying in a bizarrely decorated cottage, but it seemed as though the days seamlessly spilled into one another. Speaking to different people after we were all back home, I realized that the different moments of the vacation formed a single whole: no one event outshone the others. They were all “equally” powerful in a subtle way, like pieces of a puzzle coming together to form a bigger picture. There were less presentations and more hikes than usual. Most importantly, there seemed to be an overall awareness of belonging that percolated into the gestures and activities proposed over the course of the days we spent together.

“Friendship is a companionship guided to destiny”

As I reflect upon what happened during our stay in the Thousand Islands region, I find myself going back to the brief introduction we had the first night. Marc-Antoine from Montreal and Lele, a Memores with whom the CLU has developed a friendship, told us about this year’s theme. Behind them hung a large banner that was designed specifically for our vacation: the title “Friendship is a companionship guided to destiny” complemented a 1950s picture of GS kids reciting morning prayers on the beach, accompanied by Fr. Giussani. With this picture in mind, Marc-Antoine and Lele told us how the friendship in the CLU had been an opportunity to take each of their lives seriously and be reminded of their desires. Lele added that we were not alone with our questions and needs. Rather, our friendship was the first step on the path of discovering how to face them.

Like the students on the poster, we set out to recite morning prayers on the cottage’s balcony. With a beautiful view of the silent and still lake, each day started with the invitation to be present, to recognize when He comes during our day. Lele told us that prayer was a way to beg. We were incredibly lucky to have him among us, to guide us during those days. In different instances, he was a presence and a reminder that this was not a vacation in the traditional sense of the term. Rather than checking all of our problems at the door, we were invited to take our questions seriously and to face what we truly desired for our lives. The response to this invitation could be perceived by the way everything was done at the vacation. For instance, I was struck with the seriousness in the way we judged the games this year. Having prepared them with Clara from Ottawa and Alex from Toronto, I just expected that the two designated teams would execute the games, have fun, and then we would all go to lunch. But instead, we spent over ten minutes with Lele discussing how points should be attributed to each team, based on an agreed list of criteria. And then we announced the results, distributing special mentions for valiant efforts from team members and explaining the score. In that sense, the seriousness with which we played the games was no different than the seriousness with which we prayed early in the morning. We intuited that both activities were given as opportunities and desired for them both to be a way in which something greater than ourselves entered.

This something greater became perceptible in the astonishing seriousness and unity with which each person participated in the vacation. Some helped with a book presentation and others a presentation on the history of the movement. Others prepared songs and sang/played them. Some coordinated the food preparation. But even those who weren’t assigned tasks in advance still demonstrated that belonging to this friendship has nothing to do with the size of the gesture offered. Silvia from Montreal recounted being taken aback at the way some people, when asked to clean up after dinner, would get up and start right away, as if it was the most natural thing to do. Conversations were postponed to later, or continued around the kitchen sink. Even the simplest of tasks such as cleaning the dishes became a way to concretely belong to a friendship.

So what is this friendship? Looking at how French singer ZAZ’s song “Si jamais j’oublie” spread like wildfire during our vacation may be an indication. We sang it before presentations, around the campfire, and everywhere in between. In the chorus, ZAZ sings: “Rappelle-moi qui je suis, pourquoi je suis en vie/ Si jamais j’oublie, les jambes à mon cou, si un jour je fuis/ Rappelle-moi qui je suis, ce que je m’étais promis” (Transl. Remind me who I am, why I am alive/ If ever I forget, if I run away as fast as I can/ Remind me of who I am/ And what I had promised myself). The singer’s heartfelt plea is so simple, so relatable to our human experiences that I think we all could grasp it. The song became the backdrop for a friendship that reminds us of what we are made for. Through the song, I understand more what it means that we are accompanied on our path toward destiny. Indeed, I came to realize that I have a tendency to forget what has happened to me or to set aside my seemingly “unanswerable” questions. I let my heart shrivel up and fall into a cycle of indifference. But here’s why our friendship is so crucial: my friends remind me that my heart is not meant to be wrinkled. They do so when they take their own questions seriously or when they refuse to let me forget mine. And I can only do the same for them.

“This vacation was truly ours”

On the last day of the vacation each year, there is an opportunity to share judgments that we have made over the past few days and to ask questions that we may still have or some that have arisen. This year, no one needed prompting to “fill the silence.” One after the other, with barely any hesitation, people spoke out candidly and with a sense of urgency. One friend told us that she finds it hard to live her life actively without manipulating reality. How can she follow and accept God’s plan for her life while still being alive? Another friend, after having watched the video where Giussani recalls the friendship between John and Andrew, was moved to see that Giussani was also describing the friendship among the CLU. She clearly saw it as the most attractive relationship to live. So then why would she, or anyone, chose a different path? Ultimately, hers was a question of vocation.

How is it possible that these people shared their most pressing and sometimes personal questions with so many people? Lele prompted one of our friends, asking “if we couldn’t bring these personal questions here, then where else could we ask them?” Yet, many people at the vacation didn’t know each other well. For some it was even their first CLU Vacation. So why was there such a level of comfort amongst us? There certainly was a growing unity amongst all of us. That doesn’t mean that we all knew each other extremely well, had spent a lot of time together, or even shared common interests. To a certain degree, these factors don’t really matter because we share the most important thing: an awareness of our desires and a thirst for the One who can satisfy them. In that sense, Alex noted that the vacations were truly ours. Everyone’s participation was a sign that we all understood that we belonged to this friendship, because this friendship points us to something so much greater than ourselves.