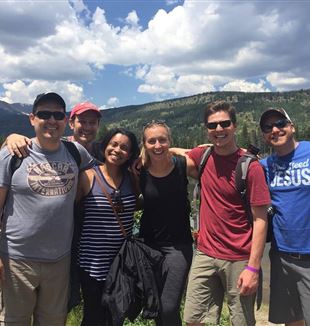 Our annual summer vacation took place on July 5-8, 2018, in Estes Park, Colorado. This year, the vacation hosted 130 people, including fifty children under the age of 14.

“Even if we just knew a handful of you, we drove from Tucson with the kids asking where we were going. We told them we were going on vacation with friends, but we could not answer when they asked for these friends’ names,” said Giulia from Arizona, a mother of four who attended the vacation with her family. “And yet, I wanted to come and see if it is true that Christ does not abandon me even in the desert.” The longing and anticipation experienced by Giulia was a general trend among those attending the vacation and it was beautiful to find that, for many, it all began way before the initial gathering. “At first, [there was] an enthusiastic ‘let’s go,’ but then [came] the difficulties of arranging a weekend away in the mountains with a 12-month old and a six-week-old,” explained Joey from Denver. “But I need a place to belong to. I need to rediscover that I belong.”

Gina, who lives in Denver and works for the Catholic evangelization group FOCUS, reflected on her expectation for the summer vacation. “Why do I go if I can see friends at other occasions? Because something is going to happen at the vacation!” This “something” was precisely the focus of the four days, the theme being, “From this fact you will know that I am the Lord.” 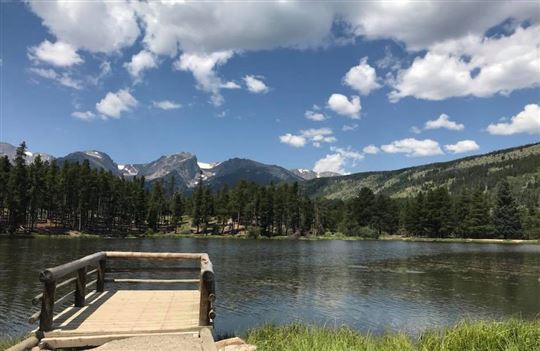 Following what was suggested at the National Diaconia in June--to look at the facts happening among us--our vacation began on Thursday with mass and three witnesses. The first witness was Valeria, a mother of four from Broomfield, Colorado, who talked about her ten-year-old child. “Stefi,” she told her, “I do not know why the doctor told us that two of your teeth may never grow in right, and you cannot be like everyone else. But Christ is asking something of you and I want to look with you at what He will do in our life through this.” The second to speak was Mike from Denver, Colorado, a man who, two years ago, was assaulted and injured by a man called Antoine. “For a while, I did not know what to do, what to say: I wanted to meet him, and it was not possible. I started writing a statement full of abstract words,” he told us that night. “Then, I looked at what was happening in my life. I know what it means to hurt people and how in those moments all I want is to be told that I am forgiven and that I am not my mistakes. So, I went to the trial and addressed the judge and Antoine. Antoine’s family and the judge wanted to talk to me at the end, grateful for the way in which I was able to look at him.” Lastly, speaking via Skype was Jim, founder of the non-profit My Father’s House. “I was in prison for 20 years. I searched for happiness in a lot of bad things that hurt people and I am full of regret for that,” he said. “One day, four members of CL showed up to visit me. I was surprised and I never thought they would come back. They regularly visited me for three years! I was blown away, as well as other inmates.” In 2016, two years after his encounter with CL, Jim was unexpectedly paroled. “Again, the CL folks were there, helping me slowly get back to life outside prison. It was because of this experience, that I realized that I fulfill myself only by helping others. With the help of CL friends, I founded My Father’s House, a non-profit organization that seeks to help parolees by leasing out a fully furnished house where they can restart a journey of healing. And once a week, with CL friends, we dine with them.” The witnesses spoke for about fifteen minutes each. Forty minutes later, thanks to the experiences they were willing to share, something had changed in us: we recognized that the Lord is present and uses us and our circumstances to do something new. “The heart is in a different position,” said Marcia from Texas.

On Friday, we hiked for three miles, with the Continental Divide on the foreground, up to Sprague Lake in the beautiful Rocky Mountain National Park. At the National Diaconia we were also told not to simply have several presentations on our respective vacations, but to “ask [ourselves] how the things [we] do and hear judge [our] life; what they show to [us].” Taking this advice to heart, after getting back from the hike, we rested and showered and then regrouped for a conversation about what we had seen on the hike. John from Colorado told the group about a couple he ran into on the way to the lake. “They started asking me what organization we belong[ed] to and what kind of retreat we were attending. I responded that we were simply friends on vacation and they were amazed. When we started singing, I turned and they were gone. I wish I would have invited them to sing with us.” Paolo, an MBA student from Kansas, was changed by the witnesses he heard the previous evening, which witnessed to him “the beauty of engaging with what happens in life.” He saw this change in action in the mountains: “While we were ready to walk back, I noticed six lunch boxes left on the ground. What do these boxes ask of me? I picked them up and still did not know what to do with them. I called a friend, who helped me with the boxes. There is no moment in reality that does not ask me something. On the hike, I was present, I wanted to respond, and with the help of a friend, I was able to do it.” Evan, a nine-year-old from Colorado, caught everyone by surprise when he walked up to the microphone and said that he had a difficult time on the hike. However, after he found himself at the end of the line, someone offered to take his backpack and carried it all the way up the mountain. “I saw generosity: that is what I saw on the hike.” Revisiting these reflections, Fr. Michael from Colorado added, “These are not ‘our own little things.’ They are little only in a statistical sense, maybe. In fact, our way of living together is truly extraordinary.” 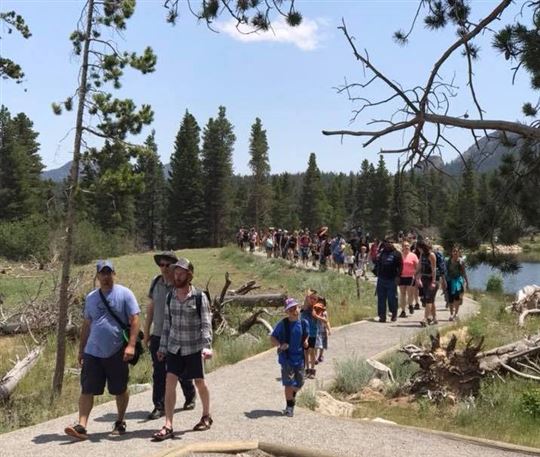 The method on the vacation became a clear pattern of attention, judgment, and a change. The fruit of that was the joy that soon began to show on our faces. On Friday night, Marcia gave a witness which started to shed light on the source of this joy. “I know that He is the Lord because He arouses a promise, a question, and then He fulfills it, in a concrete and very personal way,” she said as she addressed all of us. The following day, the same joy was apparent in the way we played the games. They consisted in a competition between two teams rallied behind their respective captains: “Lord” Jon and “Lord” Jed, both from Colorado. The aim of the competition was for the teams to help their captains rise to the throne as King of Estes. Even the games became facts to look at to select a king and to enjoy each other’s playfulness.

Following Fr. Carrón’s proposal to have a moment of guided listening to classical music, Elizabeth, a friend and professional pianist, performed pieces by Chopin, Schumann, and Blessed Dina Belanger that she learned specifically for us. The first performance was for the kids, and the second was for all of us. Before Elizabeth introduced and performed those pieces, Jason read an excerpt from the recently-published biography The Life of Luigi Giussani. The chosen passage was about Beniamino, Giussani’s father, and his “radical decision to provide the family with an existential dimension far beyond pure entertainment,” by bringing live music home despite their poor financial conditions. Eighty years later, Elizabeth was the hand that reached us with the same gaze that told us:

“In life, man is struck by things that arouse his tenderness, by things that attract him more instinctively, that he likes, that put him at ease, that are to his taste. […] And yet, life lies beyond the music in the foreground: it is a single note, from the beginning to the end, from the time we are children until we are old. Just one single note! Once you become conscious of that note […] you never lose it again; you cannot lose it again […]: it is the desire for happiness.” 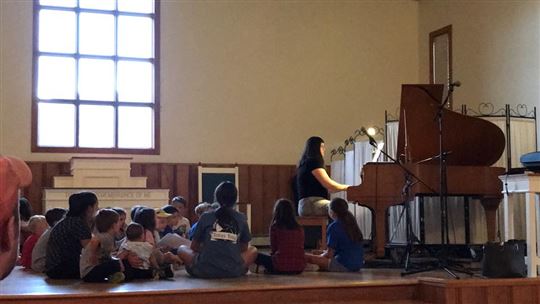 And so be it! Saturday night we had a dance party that “simply wanted to be a great vibration of joy,” as Cassie from Colorado said. Mary (Colorado) prepared cards and snack food and Julie (Colorado) and other moms decorated the room for us to enjoy.

On Sunday, we had just over an hour to share what had happened in the previous two and a half days with each other. Jason, a pharmacist from Denver, said he saw people who weren’t that different from the ones Christ chose in the Gospels, and that he “saw Mercy on [himself] and among us.” Therese, a Nebraska nurse, shared her discovery of belonging to this place because “here, [she] can look at the questions of [her] heart with a deeper knowledge and awareness.” More discoveries were shared at the final assembly. People realized that when they were changed, their kids were also changed, and throughout the entire weekend people experienced a gratuitous preferential gaze on themselves and on their families. Like we discovered at the National Diaconia, people here also realized that, at times, we are moved but do not move, as Lisa from Colorado shared.

At one point, Katie from Denver asked, “How can I know that we are not just nice people and that this [will] not remain an emotional high?” If it lasts, was the answer. On Monday morning, it is up to Him again. I can “use my freedom and follow this friendship,” as Shae (Colorado) said, and I can follow the way we lived these days together. This way, I will experience, again and again, that, as Gary (Colorado) said, “He never stops flowing incessantly like the river [we] saw on the hike.”