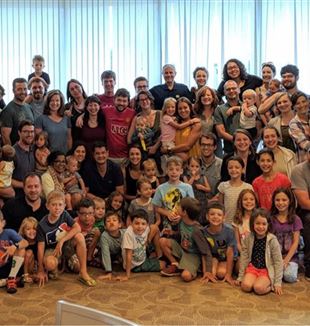 “Many times we’ve been together, but this seemed like something new. Many times you’ve spoken, but this time it seemed like something new.” We sang this on Tuesday before the vacation’s synthesis, and the lyrics of Further On seemed to echo the strange paradox of those days. It’s been three years since the beginning of this unique fraternity, born as a recognition of the unexpected relationships a group of young Americans established while working on the exhibit, I Am Exceptional: The Millennial Experience (New York Encounter and Rimini Meeting, 2015). Since then, the group has continued to grow—it is now made up of over sixty young and older adults from fourteen American states and Canada—and to come up with new ways to get together, defying the distance. These ways included local meetings, monthly online meetings, four yearly week-ends together, half a day at the New York Encounter, and summer vacations.

Paradoxically, as time passes, the question of what this place is, what a fraternity is, increasingly emerges—it’s as if, the more we stay together, the more we become aware of being before something greater and mysterious. As Marissa, who recently met the movement and came to the vacation accompanying her husband, wrote, “There’s a magnetic presence here that attracts me,” one that is profoundly familiar and unknown at the same time.

The first two mornings began with short assemblies. They were filled with stories about what happened this year to those who let themselves be attracted to this place, allowing for Christ to become the core of their affection through specific faces. Nick, CEO of a rapidly-growing Minnesota tech company, fleshed out his past few months: a very stressful situation at work, his wife’s health issues, and the birth of his third child within four years. While in this vortex, his wife continuously recalled him to the Fraternity, “A place where, even when I feel like I’m drowning, I can follow, and I can bring all these worries.” So, one weekend Nick got his kids in his car and drove seven hours to visit a friend. On another weekend, at lunch with those friends, he asked for help to look at his work and, starting from the outcome of that conversation, in the following weeks he asked his work partners to review the structure of his role in the company.

Marta, a New York architect, talked about the dizzying experience of waiting, “face to face with the Mystery,” for a response to an adoption request, and about how a weekend in Washington, DC, with a couple from Cometa and a few other families, allowed her to breathe in front of those dramatic days. Vlad, from New York, said his gaze on himself changed the moment he let some faces into his life, to the point where he decided to leave his office job and take a risk on an adventure with his own company. He realized that the true miracle isn’t what’s been happening to him, but the preferential relationship he is discovering. After each witness, Fr. Julián replied with a series of questions, “How does the Fraternity contribute to your living the real? What allows us to remain waiting? How is it that this journey helps us grow in familiarity with Christ?” This way, he opened the door to the opportunity to live the following days with tension and attention: “We don’t have to answer all these questions now. If we keep these questions alive, during these days we may intercept the answer when it presents itself in front of us.”

The days that followed, with games, hikes, cooking together, and a pilgrimage to the local Lady of Guadalupe shrine, were all marked by the desire for greater radicality, that this familiarity with the Mystery may come to embrace and mold all aspects of life—from the way we stay together to our understanding of work and world issues, from how we use our money to how we educate children. The research of P.J., from St. Paul, MN, comparing the Montessori educational method to Giussani’s, gave way to an evening conversation with Fr. Julián centered around rethinking our way of staying with our kids, starting first and foremost from the vacation. This revolution begins from the discovery that, “The child’s problem is the adult’s problem: we can only introduce children to reality if we are open to letting ourselves be generated. Are we open to depending on someone like this? Only if we engage with the real and receive an answer to our reactions can we face [children’s] reactions and needs!” 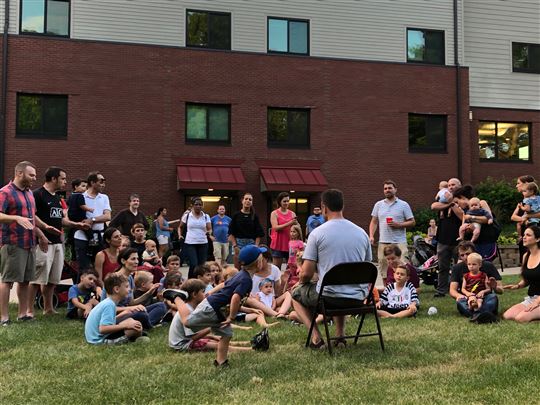 The following evening, Tim from New York told us about his job at the United Nations. He talked about the past few months’ difficult negotiations on a new set of international guidelines on global immigration management--subtly, behind different procedures and technical terms, he revealed how this companionship can allow one to embrace the whole world and to look at everything starting from the gaze of Christ.

And so, one afternoon, when Gary, a Minnesotan father of five, proposed a two-and-a-half-hour canoe trip down the river for all (including the thirty-five children and eleven infants), everyone thought up hundreds of reasons not to go. Yet, one after the other, we all climbed into those small metal canoes and let ourselves be pulled by the current, our mouths wide open in awe before untouched nature, and grateful for the restful quiet of the river. One by one, we all returned that evening, struck by an afternoon that was the paradigm of what the fraternity is for us: a place where, by following another, what appears difficult to us is no longer an obstacle; a place that constantly pushes us beyond our comfort zone and makes it possible to demand the impossible.

In five days shoulder to shoulder, some difficulties, inattentions, and discussions did not lack. However, as Marta noted, “What becomes increasingly clearer to me as time passes is that our contradictions, struggles, and limitations are signs of One at work among us.” “Our contradictions are not something that will ever be resolved, but they are part of our wrestling with God, and are, therefore, mysterious,” comments Fr. José. “So, there’s the possibility of a journey for me, not to resolve my problems, but to embrace them. This way, the sadness we may experience in front of contradictions isn’t because things did not go my way, but because I was not looking at You, because I miss You.”

How do we move forward? What steps are there to take even regarding practical issues an expanding fraternity like this one may face? “’Why on earth would I follow a cloud?!’ The Israelites could have asked,” said Fr. Carrón. “The only reason to stay together, accepting sacrifices, conditions, and other people’s measures, is if we perceive this place as corresponding to what we are looking for. I have no other criterion to offer you.” “I love that! But,” urged Greg, “doesn’t following other people’s measures contradict using my heart’s measure as the criterion for correspondence?” “But the measure of the heart is that there is no measure! The heart discovers this in relationship with another,” one who, happening, bursts through our small measure and reveals that we are made for much more.

At the final assembly of last year’s vacation, Tim had reacted annoyed at some people’s comments: “Why is it that, in front of the things that happened these days, you keep saying, ‘It’s Christ’?! How can you say that and be sure there is no other explanation?” On Monday, on his flight back home, he wrote to his friends, “I no longer can go home and not say, You. But I saw You, I know You. I lived that moment with You and it wasn’t the same. Can You do this again? Please keep doing this again.”